Although this is a standard blog, focusing on written material, I have tried to include Video Podcast/Vlogs from the earliest time of the blog. Here is a lookback at the history of Video Posts. You can monitor the weight gain and hair color/loss along the way.

This page has two brief videos about this projects first round of Jaws material.

A couple of weeks later I did a short discussion on the process I used in finding movies for the Summer Project. Very informal but the Summer attire is typical of my wardrobe in the summer.

It would be a couple of years before the next VLOG link on the KAMAD Blog page. there are multiple posts on the link but the video here was lengthy and really fun. If you are also a Jaws fan, 43 minutes isn’t too much time do you think? 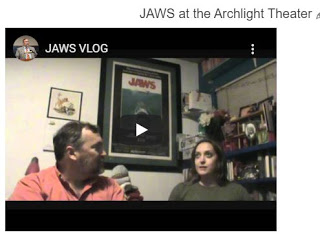 Amanda and I also did a double VLOG on two classics we saw on the same day, Lawrence of Arabia and Vertigo.

A long day at the movies capped off by two video posts. That was a full movie experience.

We were a little carried away that month, so we tried another video just a couple of weeks later on Swashbuckling films.

For Father’s day that year, I got a double dose of Sean Connery and thought a brief Vlog would cover it.

It took another year before there was another video for the blog. This was an Unboxing Video that featured a Lootcrate Special “Aliens” package.

I mentioned “The Title Pending Movie Podcast” on my previous look back post concerning podcast history. They had a Summer Movie Draft each year and it was a lot of fun to listen to the wrap up when the winner was revealed. However, in their last year they stopped doing the podcast before they did the Summer Draft Wrap Up. I took it on myself to remedy that and I posted a smart ass hi-jack of their show.

Fogs and crew actually responded by putting together one final podcast and they took my comments with the humor it was all intended for in the first place. Unfortunately the podcast is no longer available for me to post a link to.

Amanda and I started to do a series of Vlogs on “The Essentials”, films designated by TCM as important to movie history. We only did three or four before we got side tracked but here is a pretty good example of what it entailed.

I’d like to come back to this project when I can.

If you are interested, there are a number of film reviews you can find at the KAMAD Vlog. Also if you dig around the First week of January for the last five years, there is a video to accompany my Ten Favorite film list for each of those years.

I know most of you will probably not go deep on these look back post, but when Covid 19 has you locked in your house for extended periods, I enjoyed doing this, I hope you will enjoy some of it as well.