Human beings are incredibly complex animals. While it is true that we have the same basic physical characteristics as other animals, for the moment, we are the only ones who can create elaborate stories to amuse ourselves. The detail, intricacy and inventiveness of some stories is amazing. The MCU has woven together twenty or so films so that ideas are connected in fairly logical ways. That is amazing. What is also amazing are the premises that we can invent for a story to exist in. “Ready or Not” doesn’t have the internal logic of a comic book universe. It does not unify a variety of different story lines into a coherent single narrative like some films attempt to do [ex: Babel, Crash etc.]. This movie has only one idea, but it is a pretty good one. New members of a rich family must participate in a game ritual before they are truly accepted into the clan. That’s all, except of course it isn’t.

As a device for entertaining us, “Ready or Not” is a morbid little piece of film making that takes it’s premise seriously, in spite of how preposterous it is. There are exit strategies available to the young couple which would abrogate all that follows, but that would deny us the pleasure of seeing the premise play out. So forget how the rules are supposed to work. Don’t worry about internal consistency. Just sit back and watch the mayhem, root for the heroine and laugh at the gruesome macabre sense of humor that the story tellers have come up with.  Samara Weaving , a doppelganger for  Margot Robbie, plays Grace, the bride who is joining the eccentric and ultimately evil Le Domas family. Once the trap has been sprung, the movie is a series of escapes, close calls, character reveals and assorted Road Runner/Coyote antics, all with a heavy dose of violence.

The nice part of the story is we will actually like Grace. She is not a gold digger, she just happened to fall in love with the wrong man. The collection of misfits in the family is fun to watch because their privilege is so clearly on the surface and so exaggerated, no one will take this as a serious commentary on the haves and the have nots.  If you read a review of this movie that takes that point of view, be careful, the author is just of it and you are being indoctrinated rather than informed by reading such clap trap. This is purely a work of imagination, a disturbed imagination, but certainly one that wants to amuse us rather than comment on the world around us. Grace discovers her situation, takes an appropriate amount of time to adjust to it, and then acts in a way that any of us might try as well. She continues to be a sound human being, and each time the horrible people she is up against try to take advantage of that. When at the end, the nature of the family “curse/agreement” is explained, it may seem over the top, but remember, this is just a story to entertain you.

The family is filled with quirky Aunts, entitled parents, climbing nephews and nieces, and some pretty unsympathetic help. This is another one of the places that makes little sense given the rules established in the story. Why the housekeepers and butler would be part of the ritual is not really explained, but why are you asking? This is about playing a game for no reason other than the fun of it. When random characters are dispatched by accident we will laugh at the sadistic way the writers found to visualize it on screen. As we see how inept some of the family is, we will be amused when those are the people who cause the mistakes or suffer the consequences of said mistakes.  All that we want is to keep rooting for the sympathetic Grace and wait for the comeuppance the family is earning for itself. The twists and turns are what this is all about. 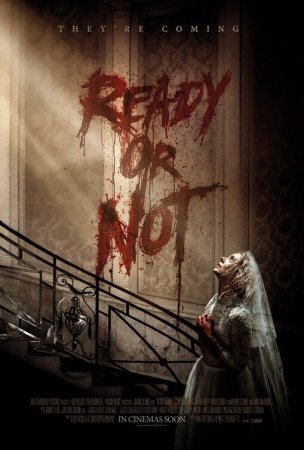 Henry Czerny, Andie MacDowell and Adam Brody are faces I know from other films and that may be why they leave the biggest impression. Czerny is the cavalier head of the family who can’t believe that anyone might challenge the established order of their universe. He also is the exasperated voice of the family when the unfortunate relatives screw up. MacDowell has moved from being the ingenue in the story, to being the main romantic lead, and now to the matron role that aging actresses get saddled with. The false sympathy she conveys shows that she has grown as an actress, who had to be dubbed in her first film, to someone who is competent in conveying a character, regardless of how realistic that character is. Adam Brody is on the brink of outgrowing the young callow characters he is playing in most things, but he got more to do in this film than he did in “Shazam!” earlier this year.

It says something about people when they can invent the scenario that comes up here. It might say even more about us that we could be amused by that scenario. This is a dark hearted comedy thriller. If you have the kind of sensibility that allows for you to laugh a a stranger’s unfortunate demise, then you will probably enjoy this film. If you require that a story be logically consistent and exist in a real world scenario, better you stay away. If you have a sick appreciation of the absurd however, you will find this movie a romp right down your alley. Now all we have to do, is figure out which kind of player you are.