007 Countdown: From Russi With Love

This is one of the films that made it hard to whittle down to seven items, there are so many wonderful elements that can’t be listed because it would violate my self imposed limitation, (You on the other hand can make whatever suggestions you want and I will be forced to listen.)

Fleming had a thing about lesbians and Klebb is his main criticism. She is also ruthless, cunning and dangerous.Lotte Lenya had talent but looks were definately a major factor in casting. She had to be tough, butch and potentially revolting to the recruit she is manipulating to do the work of SPECTRE.

One of the unappreciated delights of the film is the Theme song that is not actually played over the titles. There is an jazzed up instrumental version for the creative credits flashed on the bodies of belly dancers, but except for a small clip heard on a background radio, we have to wait until the end of the film to hear the English version of Frank Sinatra smoke this tune and make us wistfully dream of visiting Mother Russia. 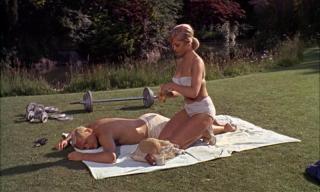 We saw Grant dispatch the James Bond doppelganger in the opening scene, but his real introduction is as a silent piece of muscle. First he is administered to by a lovely woman who strips down to her underwear to do her job. We know where Bond would have gone with that, but Grant is indifferent.

Then Rosa Klebb tests his fitness with a hay-maker to the solar plexus with a nasty set of brass knuckles. He responds to her in pretty much the same way. We know this is not a nice man, and that he is extremely dangerous.

For most of the adventure in Istanbul, we see Grant in the background. He stirs up trouble, he protects Bond from an inadvertent death and he never speaks. He is as silent as a ghost. When he is shadowing Bond on the Orient Express his reflection shows up more than he does until he finally makes contact.

005  The Beginning of the Gizmo Cliche 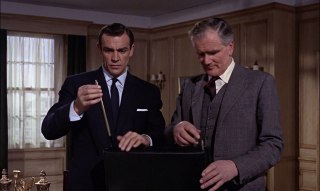 In Dr. No, Bond is confronted by a quartermaster who simply replaces his gun. “Q” is introduced in this film and he has more than a Walther to offer 007. The first in a long line of gadgets and tricks that sometimes work but often not the way they are expected to. The attache case has secret compartments, emergency money, a sniper rifle and a gas bomb.Just what the kids want for Christmas. That is sometimes Bond’s joke about the gruesome items that Q Branch comes up with, but it was very true for me.

As a kid, I wanted all that spy stuff. For my birthday, here is what I received. I still have the plastic shell of the toy briefcase, although it is cracked. The Decoder tool and the code book are still in tack. I don’t have the silencer that goes on the end of the gun but the shoulder stock and the sniper site are still in my kit. I used up the business cards with the invisible 007 logo, but I still have one that I wrote my name on when I was eight. The rubber dagger is long gone however. If anyone wants to get me a gift for Christmas, I’d love to be restocked with this item.

006  Sexual Imprinting on a preadolescent  boy. 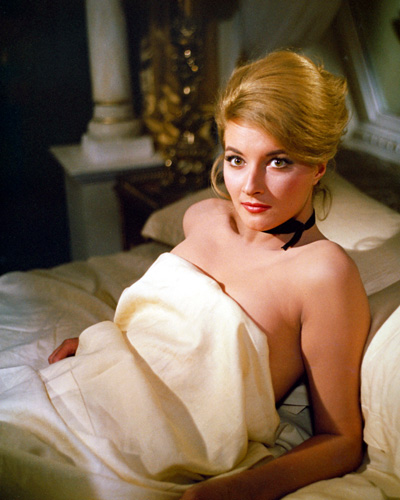 In what may be the best fight scene in the whole series of twenty four films, Robert Shaw and Sean Connery (and their doubles) take us through a brutal, up close fight to the death. There are surprises, reverses and satisfied expectations everywhere. The shaky camera technique used so often these days to give a scene reality is completely unnecessary here as these two duel hand to hand for the real climax of the picture, (In spite of three more action scenes to follow). 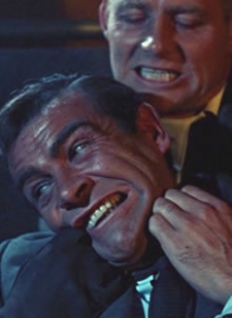 James Bond will Return in “Goldfinger”

2 thoughts on “007 Countdown: From Russi With Love”