This will be a series of posts leading up to the release of the newest James Bond film: SPECTRE.

Since I have posted mini reviews on all the films in another series that will be linked throughout this project, I thought I would do something a little bit different. I am going to post my 007 favorite things from each film in the series and provide an explanation, a picture or a link for all of them. With some films on the list, it will be gut-wrenching to have to limit my list to seven items. Other films in the series might produce a struggle for me to find seven things that I like. This mostly provides an opportunity for me to watch all of the films again (some for maybe the thirtieth time) and get jacked up for the new movie. I hope any of you reading will feel free to share your own lists or to disagree with the choices I made. Now, lets have some Double Oh fun. 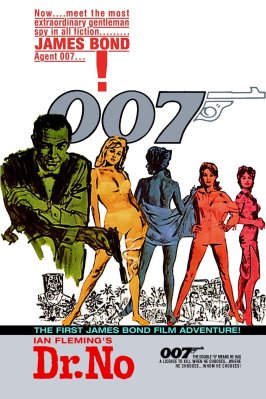 In a long line of films that climax with an explosion that wipes out the secret lair of the villain, the destruction by nuclear reactor overload, is the first. Crab Key goes BOOM! 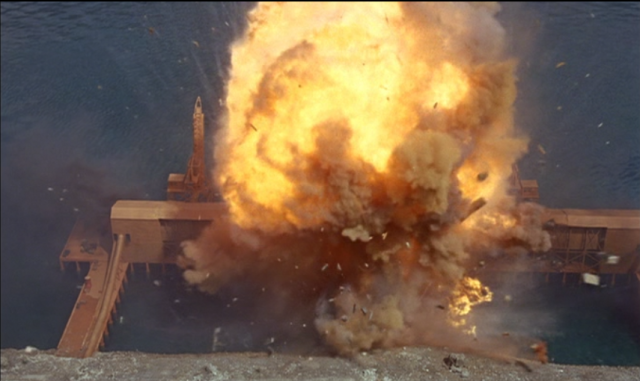 The recurring international terrorist organization, which minimized the need for the Soviets to be the bad guys in every movie, is introduced in this movie. In the books, SPECTRE was not introduced until “Thunderball”, but Dr. No introduces himself as a member of that evil institution, “I’m a Member of SECTRE…Special Executive for Counter Intelligence, Terrorism, Revenge, Extortion. The four great cornerstones of power headed by the greatest brains in the world”. The portrait of Wellington Bond sees at dinner with Dr. No. was stolen in a famous case the year before the movie came out. This is a reference to the extensive criminal activities of the organization.

When being given his mission by M, he is chastised for his use of a Beretta and the now famous Walther PPK is introduced. Bonds boss has a great quote that will guide him for years to come:

“The OO is a license to kill not be killed.”

Production design  is a huge part of James Bond films. In the first sequence where that becomes extremely evident, the devious Dr. Dent picks up a package to help him eliminate Bond. The interview room where the disembodied voice of Dr. No chastises him and then delivers the deadly spider, is a work of visual genius that will lead Ken Adams to work with Stanley Kubrick and make six more 007 films as well.

The start of a half century tradition takes place in the beginning of the film. Bond introduces himself to Sylvia Trench, his gaming opponent.

For almost all Bond fans, the defining moment of the first James Bond adventure is the appearance of Honey Ryder in the film. Ursula Andress , steps out of the ocean in a white bikini, and every man now wants to be James Bond for the next fifty years. 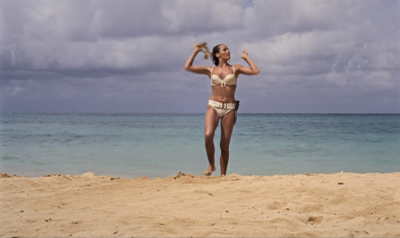 Oh, so this is what being a super spy is all about, Sign me up please.

My favorite moment from Dr. No occurs when after setting a trap for Professor Dent, Bond dispatches him with the most brutal moment by 007 in any of the movies. It finishes with a great quote.

So that’s it for now.

James Bond will Return in

“From Russia With Love”