If after watching the above trailer, you did not smile and laugh at the same time, you had better skip this movie. “Puss in Boots” is all about attitude and self assurance being played for big time laughs and it takes advantage of the character voice of Antonio Banderas like you would not believe. This character is all swagger and outsized ego being put into it’s proper place, but not before we get to see some great moves and smooth lines from our hero.

You may notice that I am not shy about seeing a kids movie. I am a big kid at heart as it is, so anything that is aimed at the young yearning heart of a schoolboy wanting to be a superhero has a great chance with me. I saw the first three Shrek movies, I have no memory of what the third one was about. I skipped the last one because the premise seemed tired to me so maybe I have missed something, because this stand alone story of the swashbuckling cat was really quite charming. It owes almost nothing to the story of Puss in Boots that I learned when I was a kid, and instead reinvents the fairy tail as a story that mixes in Humpty Dumpty as the antagonist. There are no further references to the fairy tale universe except for Jack and Jill and the beanstalk and golden goose (OK, so maybe there are, but they are not tossed in randomly as they were in Shrek) and the world depicted here has no visual connection to the forests of Shrek.

I have always thought that Antonio Banderas was best as a comic actor, because his voice and accent are the epitome or the Latin lover stereotype. He was perfect in Zorro a dozen years ago. The first of the two Zorro movies he made was my favorite film of that year. He is a the embodiment of the character as it should be, but also had a big comic edge to it. In Puss in Boots, he takes that comic edge to the brink and jumps over to the other side. He is mocking himself in the style that is endearing rather than maudlin. You can tell that he was told to live it up to make the movie work. I know it is an animated movie, but he is the character, so much more than any other animated celebrity voice I can think of right now. 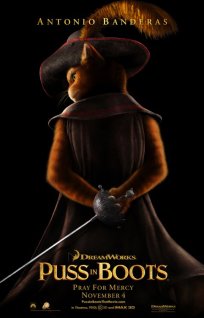 The story telling works well, despite the abandonment of the original premise of the character. There is a long set up of the character, after we have already been in the movie for a substantial amount of time. There is even a joke about how dull it is to go back and relive that past, even though everyone in the audience wants to see it. There are some terrific comic sequences based on the behavior of cats; purring, chasing lights, and generally being cats. There was a dance fight that made me laugh at the silliness of it and still feel like it mattered how it turned out and admire the choreography of a cartoon. I also thought that there were some real emotional moments, maybe a little contrived but they worked in the context of the story.

We skipped the 3 D on this movie. I suppose there might be some things in the movie that would look good with that extra dimension but I did not miss it. The background vistas reminded more of Rango, than they did the other Shrek movies. The tale is set in what appears to be Mexico, or maybe old Spain. It is more of a western than it is a fairy tale and I probably liked it more as a result. There is nothing ground breaking here, just a good solid entertainment that makes the best use of a character voice and actor. It gets by on a lot of the charm that the cat has, if you are not charmed by it in the ads, skip the movie. If,like me, a swashbuckler is catnip to you, than this is a purrfect animated adventure which you will enjoy all your nine lives. (Yeah, I know this last part is a little precious, but I feel a little perky right now so I’m keeping it.)