I said immediately after the film was over, “that was ridiculous, and perfectly entertaining.” Amanda agreed instantly saying that the description is very accurate. I noted in the credits at the end of the film, that there was a historical consultant and etiquette expert. A guy with a PhD. should not be taking credit for being the history expert on a film with scuba diving musketeers and flying pirate ship battles that end on the spires of Notre Dame cathedral. This is an over the top 3-D extravaganza, that should not be taken seriously for a moment. That does not mean that it was not great to look at or without any redeeming features. There are many things to recommend herein but if it is a true to life “Three Musketeers” you are looking for, look elsewhere.

Paul W.S. Anderson may be one of the most despised directors working on a regular basis. Fanboys love to find directors to hate and then they pile up on them whenever they can. Anderson sits alongside Brett Ratner and Uwe Boll as film makers that geeks love to hate. I can say that Boll deserves such disdain, but the other two, including the director of this film are victims of taste rather than ability. Anderson is a competent film maker with a flair for the obvious. He makes movies that should be ignored, watchable. He appears to know that he is not an artist but rather a craftsman telling a story. We all love a person that can tell a good joke, and pity the guy that can’t make a joke work at all. Anderson can make a joke work, although others can probably tell it better. The tough part is that the jokes are actually his sometimes, and he want to be the one to share them with us. I have no objection and I admit that there are many of his films I liked in spite of the fact that they are obvious (Death Race). So I can give him credit for putting this together and making it work. Of course it could be better, but you would have to re-write the script and cut out all the foolishness.

Many of the traditional Three Musketeers tropes are here. Milady’s betrayal, Richelieu’s evil and D’artangan’s boyishness. The screen writers steal from other movies constantly. We get a Divinci Code reference, swordfighting tips from Errol Flynn and Bruce Lee, and even a nod to spaghetti westerns and Mr. Clint Eastwood. Once you get used to the brazen way that dialogue mimics other movies and plot devices are going to turn in on themselves repeatedly, you can give in to the fun this movie offers. It looks really spectacular, even if it is so widely based against CGI backdrops that George Lucas should get a piece of the take. I noticed how the costumes seemed so much more elegant and accurate than the stripped down vests and tunics from the Disney Three Musketeers from 1993. The choreography of the fight scenes is exceptionally elaborate and would require Basil Rathbone to go back to fencing school for twenty years. Again, we just need to go with it, this is one of those films that is self conscious of the fact that it is a movie and is therefore willing to go for the visual over the realistic. 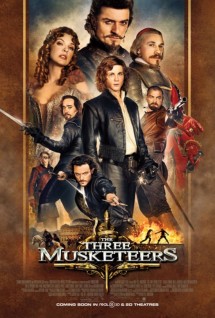 The young leads, Logan Lerman and Gabrielle Wilde as DArtagnan and Constance are the two actors out of their depths in the movie. He looks about 12 and she resembles a beautiful staute of a California beach girl, not a sevententh century lady in waiting. On the other hand, Milla Jovovich has played these sort of over the top women before. She has starred in the Resident Evil films as a bad ass for ten years now, she can play seventeenth century slut/spy/swordswoman without breaking a sweat. (She is also married to the director who made those films and this one.) The three guy that play the Musketeers are really very good. In particular, Matthew McFadden who plays Athos, is sullen, urban and clever all at once. We have seen him in “Pride and Prejudice” where he was unaccountably sexy, “Death At a Funeral” where he was hysterical, and “Robin Hood” where he was wasted. He is the actor with the star presence in this movie and he sells in in every scene he is in . Porthos is played by Ray Stevenson, he was in one of the Punisher movies as the lead a few years ago. In this movie he was very well cast and carried off the arrogant charm of the character really well. He also strongly reminded me of my son in-law Drew (which is a good thing). I spent the whole movie wondering why Orando Bloom was playing two parts, Aramis and Buckingham. I also thought that time had not been kind to him in his facial features, at least as Aramis. It was not until the credits that I was sure he only played Buckingham (and he was fine) and not also the other part.

I am always a sucker for a swashbuckler and this is exactly what they are shooting for here. The DiVinci designed war weapons, or those inspired by his work, are fun although they make no sense. Daring rescues, last minute escapes, and palace intrigue made this movie fill my bucket of swash just fine. The great actor Christoph Waltz is scheming and treacherous in his role. Mads Mikkelson is in another movie where he has an eye problem I last saw him crying blood in Casino Royale, and here he wears an eyepatch as the one eyed Captain of the Cardinal’s guard. Many actors have their crutch’s maybe his involve eye fetishes. Anyway, all for one and one for all, it was very entertaining. Your brain cells may die off a little bit but I am sure not any more than would happen from a long night of drinking, enjoy.