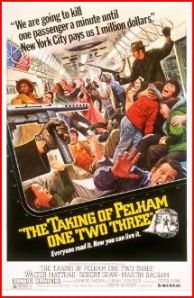 Last night we happened upon a great urban thriller from 1974, The Taking of Pelham 123. Amanda had just blogged about her love of Robert Shaw in “Jaws”, and I had suggested we do a film festival. She had already planned out some films to lead us up to the traditional July 4th screening of the greatest adventure movie ever made, so when she saw “The Taking of Pelham 123” was starting in ten minutes, she said, “Let’s Do It.”

I guess it was not a summer release and that’s why it wasn’t in the blog last summer. I know I saw this film at the old Alhambra Twin, in the big theater. It is a very solid, gritty, New York film of it’s time. The premise is basic; tough, ruthless men take over a subway car and hold it for ransom. They have a very strict time schedule and they plan on killing a hostage a minute if their demands are not met. as usual, I don’t want anyone to get any spoilers from me, so I will say little more in the way of plot. The remake with Denzel Washington and John Travolta a couple of years ago was acceptable, but it does not hold a candle to the orginal in the tension that builds up.

In the original there are some political elements about New York City, but the are not essential to the plot. The remake focuses more on the politics of the transit system and the New York Mayor. This is the movie that seems to have inspired Quentin Taratino when naming his characters in “Reservoir Dogs”, each of the four gunmen having a specific color for a code name; Mr. Blue, Mr. Green etc. They also come equipped with the automatic weapon of choice for early seventies fare, what is revered to in the slang as a “grease gun”.

You really get a feel for the city in this movie, it is crowded, and uncomfortable, but it is also familiar and a lot more community oriented than you might be lead to believe by the stereotypes of New Yorkers. At least when it comes to the passengers that was true. The transit authorities have two or three characters that fit the stereotype precisely. Take this line for instance, Correll: “Screw the goddamn passengers! What the hell did they expect for their lousy 35 cents – to live forever?” This is where you get some clever tough dialog and gallows humor. Walter Matthau is first billed and does his usual terrific job.

Robert Shaw is covered in a heavy coat, hat and fake mustache, for 95% of the film. He exudes steely eyed menace. Travolta used playful smart guy remarks and bluster to make the character contemorarey and tattoos to create a sinister persona. Shaw does it with an even handed demeanor, he never really raises his voice but the timing and tone tell you he is not someone to be trifled with. His Mr. Blue is in control of the passengers, the hostage takers and the negotiator. In other films he can have a twinkle in his eye or a smile on his face to make a point. His narrowed eyes and soft voice are scary as hell after a mid story shootout. Listen to him talk to the conductor and your blood will run cold.

One thought on “Robert Shaw Film Fesitval Day One”