After the debacle yesterday, I went out in search of more films for the blog. I have sixteen days left and I was down to three movies. My deleting Shaft and Big Jake, put a dent in the movies that I had lined up. I’ve managed to add three DVDs to my library for the rest of the blog, and I went and found a copy of Shaft at Big Lots of all places. I had had it in my hands several months ago, but I remembered it was coming on TCM so I did not buy it. Dolores and I went through hundreds of discounted DVDs and managed to find one copy of the original Shaft left. They had one of the other Shaft movies, but it was not a summer release so I won’t be covering it for this blog. If you are reading this and are unfamiliar with Shaft, you must never have listened to soul music from the 1970s. The theme from Shaft was one of the biggest hits of the decade. 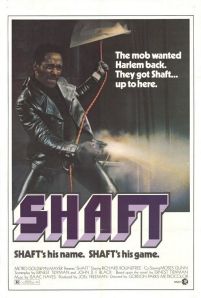 About ten years ago, Shaft was remade with Samuel Jackson in the title role. I love Sam Jackson, he has gotten me into a lot of films that I might otherwise have skipped, but he is also the Michael Caine of today. In an interview once, Caine was asked about an upcoming movie and why he choose it. The interviewer asked, “What’s it about?”, and Caine replied, “It’s about a million dollars, I’ll do it.” Sam Jackson plays for pay these days. The Shaft remake was a fine summer action movie, and it is much better produced than the 1971 original, but it none of the social cache and it lacks the biggest selling point in the original film, Richard Roundtree. I know he makes a cameo in the new Shaft, but that does not make up the lack of sex appeal from Jackson. He got the badass part right(…he’s a bad mother…) but there is no way Jackson is a sex machine to all the ladies.

Of the three reasons to see the original Shaft, Roundtree is the most important. His role was groundbreaking and he played it with all the verve a guy could muster in a low budget film like this. The movie opens with the money shot, there are things to enjoy later, but the credit scene contains the main element of the movie. Shaft is a confident, sexy black man in a white mans world, but he is not taking crap from anyone. He walks down the streets of Manhattan with his head held high and his shoulders straight. He is not shucking and jiving, there is no slouch with attitude, he knows who he is and dares anyone to disagree. His knee length leather coat and dark yellow turtleneck, sell swagger without him having to do much more than walk in a straight line, but he does do more. In 1971, the idea of a sexual black man as your lead was startling, he has a afternoon tryst with his beautiful girlfriend, and the camera lingers on his backside and her hands. The revolutionary part is that he openly engages in inter-racial sexual athletics. Any woman would find him attractive, he is a sex object for all females not just those of one ethnicity. “Guess Who’s Coming To Dinner” was only four years earlier and the inter-racial relationship was sold as sanitized by having Sidney Pointer and making him a Doctor. Shaft is picked up by a white girl in a bar, she is clearly the aggressor, and he sends her away when he is done with her like she was a waitress asking if he wanted anything else. If you listen to the end of the trailer, you will hear the announcer proclaim him hotter than Bond, and cooler than Bullet. That is a little hyperbole, but Roundtree does his best to sell it and it works. Eddie Murphy and Denzel Washington as well as Samuel Jackson have Richard Roundtree to thank that Americans can accept a black man as the lead in any kind of picture, not just a social piece. I remember that this was not always the case.

The theme song is the second selling point of the movie. Issac Hayes won the Academy Award for Best song for this piece of driving, soulful, energy. His cool deliver of the lyrics sets the tone for the movie. Like I said, the opening title sequence with Roundtree walking through New York and the music playing over the scene, that is what you want most from the movie. The story is not that interesting and there are no other characters that match up with Shaft at all. Charles Coffi is pretty good as a gruff police Lt., who understands Shaft and tries to use him to know what’s going on. Shaft would never say they were friends but they appear to treat each other with due deference after they wrestle over status issues. The bad guys are nondescript for the most part, and the women are pretty but not really a part of the proceedings. There are some other pieces of music that try to emphasize the racial tension in the world at this point. None of them is quotable or memorable. There have been other movies where the theme song was influential in shaping our perception of the film and main character, but none have ever done it as well as this piece of music.

Finally, the third reason to see the movie is to get a sense of how the world looked at the time. Physically, the New York streets are very clearly shown. As Shaft travels in a taxi uptown, he passes by theaters playing straight features from Hollywood, right next to porn houses peddling smut on a big marquee for all to know. The clothes of the time are authentic, not exaggerated retelling s of the time, but reflective of what people might wear. Most of all, you get a sense of the tension that exits in racial relationships. Not every white person was hated, but plenty were and deserved to be. Not every black was a revolutionary, but they often felt outside. Outsiders and insiders were the real lines between people, and color was a symptom of that, but not necessarily the cause. Shaft was a big part of the Blaxplotation era, but it was a success with wider audiences as well. It moves a little slow and some of the actors are painfully amateurish, but the lead and the music are worth your hundred minutes. If you don’t have the time, treat yourself to the opening five minutes below.