Originally, today was going to be “Shaft”. I recorded it on the DVR and was all set to transfer it to a DVD, and something was wrong. There was the info slide from the satellite, but no picture. I skipped ahead and there was nothing. I made the assumption that the machine had not got it so I went ahead and deleted what appeared to be an empty file. My default was “Big Jake”, but when I went to it, the file looked the same. I again deleted, and then thought to check other HD programs I had recorded. It looked like they were all the same. I was about to call Dish, when I decided to look at the troubleshooting guide on the satellite. They recommended that I shut down the receiver, let it reboot and then check. Ten minutes later everything was there the way it should be, except the two movies that I had recorded for the blog. So now I am a little short on titles because I was a little short on patience. I can hardly get madder at someone else than I do with myself in these kinds of goof ups. I put off my movie, we had lunch, watched some other stuff and then I got back to this task. I needed something that would put me in a good mood. I had been saving this title for the end because it is so special, but today I needed to rescue myself from self loathing, and “American Graffiti” is the perfect prescription.

Eleven years ago it was 1999. “The Sixth Sense” and “American Beauty” were competing for the Academy Award. It hardly seems more then a couple of years to me, although my kids are through high school and college in that time period. The catch phrase for “American Graffiti” was “Where were you in 62?” The movie came out in 1973. Eleven years after the time it was set in. When I saw this movie, I was fifteen, in 62 I would have been four. It is the same short amount of time but for me it felt like forever. It was not the blink of an eye period like between now and 1999. In the eleven years between the 1962 in “American Graffiti” and the time period that I saw it originally, two Kennedy s were assassinated, we had a civil rights revolution, there were riots in a dozen American cities, the Beatles came and conquered the world, we entered and exited the Vietnam war. Even though I was alive in 1962, this movie seemed to be about a place so exotic and so removed from my experience, that there was almost a bit of disconnect at the time. Today as I watched it, I am reminded of how people just a few years older than me might have felt. It isn’t alien at all, it just captured the feelings of the world at that moment before the cultural revolution began in earnest here in the U.S.. In 1973, when I saw the movie, it was not nostalgic for me, but I did enjoy the heck out of it and I loved the music.

This blog has been all about nostalgia. I have been trying to convey experiences that I had while growing up. I hope that people who know me, will know me better as a result of reading this project. I have had a chance to exercise some writing and thinking muscles that have been a little rusty. Most of all I have had a chance to write about my favorite subject in the world, movies. It is easy for me to be nostalgic for the films I saw in the 1970s as a grew up because they were a part of my life. What is so amazing about “American Graffiti” is that it makes me nostalgic for a life I never had. There are two films on my project this summer that have had this effect; “The Summer of 42” and “American Graffiti”. I think it is pretty clear that a movie has been well written and well crafted, if it makes you miss a time and place that you never had been before. I did a tiny bit of cruising with Don Hayes when we were in High School, but it was never like this one night in today’s movie. Every character feels real, all the situations are things that you could imagine being a part of. The fear and ambivalence of Richard Dreyfus’s character Curt are so familiar. The idea of leaving home and your friends makes even the great opportunities something to be tentative about. Ron Howard plays Steve, and he is overwhelmed by his love for his girl and the context where he was the King, that his anxiousness to beat it out of town evaporates. Charlie Martin Smith, is so perfect as the awkward, hero worshiping Terry the Toad. Terry is so desperate to be accepted by others, that he never really sees how much of their world he really occupies. The sweetness of his night with Debbie, is tinged with some bitterness over the experiences they share and some of his disappointment, but her final kiss and invitation to call turns Terry into a Prince. Paul LeMat, is the hero in town, with the baddest car and the cool Steve McQueen attitude, before Steve McQueen was the Cooler King. 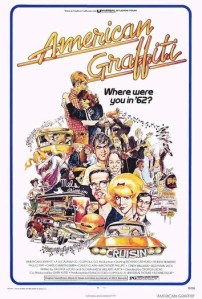 I have heard people complain about the movie as if it did not have a plot and was just a series of random incidents. The incidents may be random, but only in the way that the dots in a Monet are random. When you pull back and look at them, you get a clearer image of time and place than you would have with a documentary five times as long. In 1962, the world was in front of us, it had the promise of greatness and the shadow of unfamiliarity surrounding it. This movie shows us how every group of kids probably feels about the world, no matter when they grew up. That’s why this movie is something to treasure. 1973 films competing for the Best Picture award included “The Sting”, “The Exorcist” and “American Graffiti’. Those other two movies are fantastic, “The Exorcist” is still the most frightening movie ever made, and “The Sting” is still the cleverest despite newer rivals like “The Usual Suspects” or “Inception”. I think “American Graffiti” is the strongest of the three. It doesn’t rely on manipulation of fear, or thinking. It shows us what was in the mirror, no matter when we look. For my money it is the best film George Lucas ever made. “Star Wars” is revolutionary, and maybe the more important film, but Graffiti, is the real kind of storytelling that film makers who are artists aspire to. While Lucas continues to tinker with Star Wars, digitally enhancing this, or manipulating that, he has never to my knowledge, felt the need to go back and fix or improve this movie.

Everyone who writes and talks about this movie, mentions all the future stars that are in it. We have Oscar winners, Richard Dreyfus, and Ron Howard, future Oscar Nominees Kathleen Quinlin, Candy Clark, and Harrison Ford. TV stars Cindy Williams and Mackenzie Phillips, and movie character actor Charlie Martin Smith are all a big part of the movie. Paul LeMat, has had a very successful career, but he should have taken off like a rocket in the seventies. I don’t know what happened, and maybe some of it was his own choice, but I would have expected the most out of him when I first saw this movie. This is the third movie this week with Bo Hopkins in it, this was a really good role and he played it with a great deal of menacing and slimy charm. There is a really nice little bit by Wolfman Jack, playing himself, that should give people of today some sense of what radio was like in the early days of Rock and Roll. The other co-star that probably made this movie something special instead of just a teen comedy, is the music. Allison and I were talking the other day about how Quentin Tarantino has a great ear for music. He picks cues from all sorts of movies and plugs those sounds into his own pictures. George Lucas did the same thing here with popular music from the golden days of Rock. He did an amazing job without using a single piece of Elvis material. The way that everyone in the movie is sharing the same soundtrack for their lives is very interesting. They all listen to the same radio station, so they are hearing the same songs, but none of them seems the same. There is rave up rock, rhythm and blues, surf music and novelty songs. Everyone can like the songs they care for most, but at least they have heard the other music. Compare that to today, where music taste is often so narrow that artists with a major cultural impact are often unknown outside of the genre they work in. “American Graffiti” may be a title that has a particular meaning in the hot rod world, I’m not sure, but to me it was always about how the fabric of our experience comes together to show us our own world. The story, actors, events and music make up something far more than scratches on a wall.