This month appears to be sword and sandal month at the AMC Classic scheduling center. Last week there was “The Ten Commandments”, this week “Gladiator” and in the next couple of weeks we are going to get “Ben-Hur” and “Spartucus”. Somewhere, Captain Oveur is smiling and thinking of Joey in ways that we cannot mention. This is an opportunity to write about a film I have loved since it came out, but have never posted on before. Given that it stars Russell Crowe, was directed by Ridley Scott and won the Academy Award for Best Picture, that seems a little strange to me.

“Gladiator” is only fourteen years old, yet it already feels like a classic because it launched a hundred imitators. Before 2000, it would have been a long time between historical epics featuring legions of ancient warriors conducting combat with swords and spears. After this picture succeeded, we got “Troy”, “300”, Kingdom of Heaven”, “The Eagle”, “Pompeii”, remakes of Conan and cable series based on “Spartacus” plus a dozen others that don’t pop into my mind at the moment. This film was hugely influential on the subject matter of films in the last decade and a half and also on their style.

Russell Crowe won the lone Oscar of his career in this centerpiece of a three picture Oscar nominated run. His turn in “A Beautiful Mind” might have been deserving, but his work in “Gladiator” is what made him the biggest star in the world for about five years. You would need to go back to 1959 to find a winning performance in an action film. This is a raw, bloodthirsty part that required physical agility, and intellectual engagement with the motivations of the character. Maybe if you count John Wayne in “True Grit”, you’d get a film role that won because the character was a hero who used violence in an active way to achieve his character’s purpose. Maximus starts the film as a warrior general. Not content to sit on the sidelines but charging into battle, swinging a sword and getting bloodied up close. His moment of despair at discovering the fate of his family, reaches our hearts and hardens them to the villain of the piece, who before this may have simply been a misunderstood wannabe. The challenge he issues to the crowd in the second of his five scenes in the arena, ” Are you not entertained? Are you not entertained? Is this not why you are here?” is both an indictment and an incitement and Crowe has just the right take on it. Everyone who has seen the movie knows that the passage that won him the award was his self revelation to the Emperor at the conclusion of the first Coliseum fight. His controlled fury is the point at which the story has been tightened to it’s greatest capacity, and we await the outcome because his voice told us it would be coming, in this world or the next.

As I listened to the music, there were several passages that sounded just like the themes from “Pirates of the Caribbean” and it is with good reason. Hans Zimmer recycled some of those heroic motifs from this film in the lighter pirate movie just a couple of years later. There are some great details in the production. The dusty red hued out post that is Proximo’s home feels exotic and dangerous. The blue-grey tint to the battles in Germania were cold to contemplate and you could feel the dirt on your body. The golden shaded views of Rome and the gladiator contests themselves make the setting the center-point of all the proceedings.  Richard Harris leaves the film early but still makes an impression. Joaquin Phoenix as Commodus has a terrific scene with Harris, that makes us temporarily sympathetic. He manages to turn that into revulsion by delivering the provocative description of the fate of Maximus’ family in a tone that makes the words even more horrible. His work contributed to Crowe’s performance substantially in that section. Oliver Reed leaves this planet with what might have been his finest performance. This movie has dozens of great elements to it that make it so worthwhile. 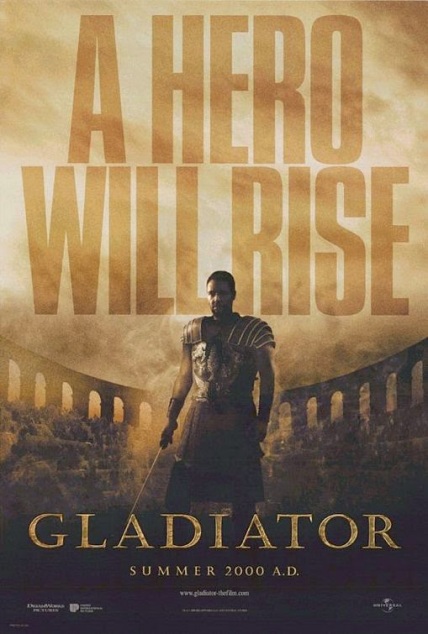 It was just me and one other guy in the theater today. AMC needs to build this programming up a little more. I could not figure out why I was not seeing trailers for the other films coming up in this series, instead of the two art house releases that may never make it to these local theaters. The cashier in the Box Office, was surprised when I ordered my ticket, she did not even know the fim was playing. That is at least the third time I’ve had that reaction when I went up to the ticket window for these showings. AMC, you are doing a great thing with this program, but get the promotion up to speed and let’s get a few more seats filled. There are others like me who would make the effort a couple extra steps were taken in letting people know what is happening.

This was the last of this years Best Picture nominees that I needed to catch up with. I saw it yesterday at the AMC Best Picture Showcase along with four of the other nominees. It has an amazing original take on technology and humanity and the vision of the future is realistic enough to take seriously some of the concepts that are presented here. Joaquin Phoenix stars in a meditative and sad performance that was surprisingly un-nomiminated this year.There may have been some talk of Scarlett Johansen being included for her voice work, but that technological breakthrough will not be coming to the Academy Awards first. Someone else is going to need to push that part of the envelope.

In the not too distant future, humans become so dependent on technology to connect with each other that they begin to fray at the edges. Theodore is a writer of letters that are personal expressions of deep emotions, the only thing is they are not letters written for him but by him. He works for a company that is paid by others to express their ideas in more poetic and eloquent ways. He is a ghostwriter for the daily emotions that people wish to convey to one another. He himself is something of a ghost. His marriage has broken up and while he has friends, he is intensely lonely. He expresses others feelings in amazing letters, but appears to have a block on connecting with others at more than a superficial level. He is not a hermit but he does have trouble maintaining relationships.

A new operating system for his electronic life begins to take over his emotional core. “Samantha” is a great fictional character that is never visualized on screen, she is a voice in his earpiece that means more to him than the once precious marriage that he is in the process of dissolving. As an artificial intelligence, Samantha is not ominous in the way HAL turned out to be, but the impact on human life may be devastating in completely different ways. I was impressed with the story arc and development of the relationship between Theodore and Samantha. There were several odd moments where the issiue of sex comes up and if you are at all squeamish about those issues, let’s be frank, it is not nudity that is discomforting it is the imagination. 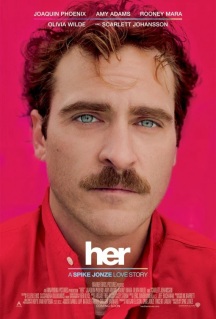 I don’t like to put anything into these posts that could spoil the movie for an audience. There are some things here that will be a bit surprising and some that are a little too precious. I thought the ease with which his dating relationship was accepted by his coworker was an interesting take on tolerance but also a potential condemnation of our unwillingness to judge others. The society of the future might sound silly to begin with but it does not seem that far fetched when you see how people currently interact with their phones. I also would have to imagine it is the far future when L.A. has become as elevated an compacted as NYC and as dependent on public transportation. It was nicely visualized and the CG modifications to Disney Concert hall and the city scape are pretty inventive. The beach scene is funny because the crowds and the way Theodore enjoys the sand in his street clothes. Taking a nap in the sun like that on the beach would result in a nasty sunburn, but that part of the technology is not really shown.

I would not be at all surprised if the next generation of phones work in a way very similar to those shown in this film. There are some nice practical advantages to the bi-fold design and the multiple lens access. The blue tooth earpiece is already ubiquitous so it is a short step to the interactive nature of the tech seen in this movie. Years ago I read a science fiction story called “Meathouse Man”, about a guy who misunderstands the way in which human bodies are being used as sex partners. He falls in love with the unseen operator of the “sex equipment” and the revelation at the end of the story reminds me a little bit of what happens in this movie. In the end, we are our own best measure of what love really is.