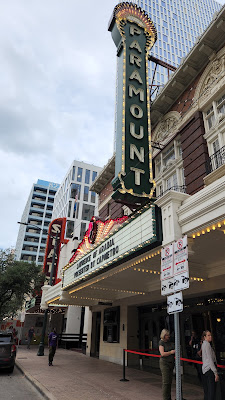 As is usual when “Lawrence of Arabia” is on the Big Screen within range, we went again to see one of the greatest cinematic experiences ever created. The Paramount Theater in Austin is finishing off their Summer Classic Movie series with some great ones. “2001” and “The Godfather Part II” are also set for the next wee, and I may try to get to at least one of those, but “Lawrence”, always.

I’ve written about this movie several times and each time I do, I try to find a different angle to focus on. This time I’m going with something that has been staring us in the face for 60 years, but we don’t really take notice, Lawrence is a funny guy, and David Lean inserts a lot of funny moments into the film. It’s easy to see the story arc of our central character by how his mischievous nature and dry wit, wither in the second part of the film.

Lawrence delights in his insouciant manner with his military superiors. He acknowledges to one General that it is his manner that makes him appear to be insubordinate when he is really just delighting in word play and his own perspective on things. He can also laugh at others and take delight in the two boys who become his servant/worshipers. It is only after the loss of one of them that the bemused smile that is usually on his face fades. It comes back briefly when the battles are won or when he foolishly chooses to enter a town with a Turkish garrison. After the sadistic treatment he receives from the Turkish Bey, he almost never smiles again.

Other characters have to cover the humor in the post intermission segment of the film. Ali pleads with God on behalf of his friend, Auda pontificates with a poisonous wit now and then, and General Allenby and Mr. Dryden provide asides and barely hidden smiles to keep a bit of humor in the film in those grimmer scenes.

It was a long day and my companion had utilized most of her energy at work that day, so I was a little concerned that the long movie and the late evening might cause some drowsiness. The temperature in the theater solved that problem. I have not been so chilly in the desert since I saw “The English Patient” in winter at the Rialto theater where the heater had gone out. I guess they were overcompensating for the weather here in Austin.