The strength of Pixar films has always been the way they manage to take an original idea and flesh it out into something the audience can relate to. Some of the concepts have been straightforward; a family of superheros, the secret life of toys, cars as people. Other concepts have been downright strange; a rat who cooks, a lonely robot, a princess who turns her mother into a bear. Regardless of the oddity of the conceit, the Pixar crew has managed to make these movies work to a large degree. Our current example is one of the weird ones. In a fantasy world that has forgotten magic, two elves must finish a spell to bring their dead father back for just one day.

I think the reason that the films of Pixar succeed for the most part is the way the creators wholeheartedly embrace their idea and run with it. Director Dan Scanlon and his collaborators Jason Headley and Keith Bunin have grabbed their idea and run with it. They commit to the universe they are creating and try to play with it as much as possible. There may be occasional inconsistencies, but they hardly matter as we plunge quickly into the story and become familiar with the characters.  The plot is a basic mash up of a high school coming of age story and a fantasy quest. The fact that these ideas are familiar to us may explain why we don’t worry too much about the characters we encounter. We will just go with the flow if we can have some characters to relate to.

“Onward” gives us two characters that we will understand immediately but also come to care for by the end of the film. Tom Holland is not really stretching much by playing an awkward teen with unforeseen powers.  We’ve seen the Spider-Man movies. Here the character is animated but it continues to be Holland’s slightly nasally voice and young sounding pitch that sells the character to us. Ian Lightfoot is turning sixteen and it makes him nervous. In fact everything makes him nervous, partially because he missed ever meeting his father who died before he was born. Lack of confidence is not the weakness of his older brother “Barley” however,  he dives in head first with enthusiasm to most things. The bravado of the character is also perfectly realized by the voice talents of Holland;s Avengers co-star Chris Pratt. The two of them together are a mismatched pair of brothers out on a road trip. The scenario creates plenty of opportunities for humor but you know that a Pixar film is not going to forgo the sentiment. There is an interesting switch in the purpose of their quest, which manages to make the movie more poignant at the end. It is another example of the writers taking a concept and finding ways to work it that are not obvious from the start. Maybe the quest is predictable, but the emotions are not. 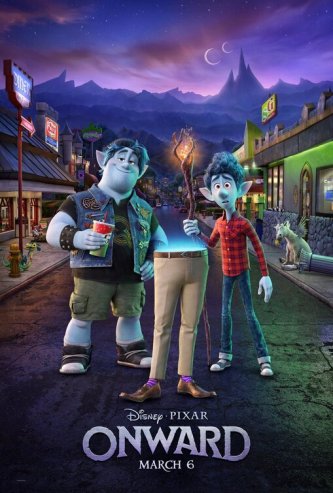 As always with these computer generated dreams (or nightmares if you remember Cars 2), there is a fantastic look to the production. The characters are realized in ways that give us shorthand on their archetypes,  but they still look original. The two brothers are Elfish but in very distinctive ways. Their Mom’s boyfriend is the nice guy cop, who maybe is a little bit of a nebbish despite being a centaur. The path that the kids take is fraught with adventure, but the biggest fright is simply being a new driver trying to merge onto the freeway. I loved the way they played with unicorns in the story, they are essentially the scavengers of this world, and like our own scavengers, they can look benign like a raccoon, but they can be pretty nasty as well. Spites turn into bikers and dragons are made of rubble, and it works because the creatives found ways for us to relate to those images.

The secondary characters fill in some space and provide a little more opportunity to play with the fantasy world, but the focus is correctly placed on the two brothers. As usual, the music cues us in on emotional moments, but like many contemporary films, it relies on our knowledge to find the right feeling. You will hear some passages that sound like they are out of a spaghetti western, and some motifs that belong in a fantasy film. There are clear action beats as the Indiana Jones moments are playing out as well. I don’t know how well the Disney team has marketed the film. I did not have a high degree of anticipation for it, but having seen it, I now know they have a solid film. I hope it lands with audiences the way it did with me.