We here at the LAMB love Oscar talk, not so much because the Awards are so meaningful, they often are not, but because they focus our attention on all kinds of details. We get five or more nominees in twenty four categories, many of which would not normally be the subject of our usual discussions. This category is one of the big eight so you might have had a little discussion on these choices, so get prepared for a little more.

This year, in this group, there are no first time nominees. In fact, everyone in this classification already had an Academy Award. They all have multiple nominations in the past, and two of the nominees have multiple awards for acting. So this is old hands time and not really a place to make up for a past injustice. Only Brad Pitt has not won an acting award from the Academy, but he has the comfort of a Best Picture Oscar as a producer on “12 Years a Slave”.

The range of characters represented here is impressive. A Union boss, a gangster, a TV Icon, a Pope and a down at the heals Stuntman. All of these characters come alive in a variety of ways and probably deserve the nominations they received. Looking around, I don’t see any significant Snubs in this division. So let’s celebrate each of the nominated performances with some gusto.

It’s been 22 years since Sir Anthony Hopkins was a nominee, which seems hard to believe. His performance as Benedict is quiet and confounding at times. We are never quite clear on what motivates this man of high intellect and deeply held religious convictions to surrender his papacy, especially to a man with whom he has significant doctrinal disagreements. We can however see the humanity in the man and his desire to advance the church in troubling times. His nomination may in part be a reflection of mastering Latin and a little bit of German. At the end of his trail, is a warm relationship with his successor and a sense of relief on his mind which we can see in the actors face. Hopkins does indulge in what I have always seen as his most obvious acting tic frequently. He has a particular way of saying the word “Yes” that he falls back on three or four times in this film. 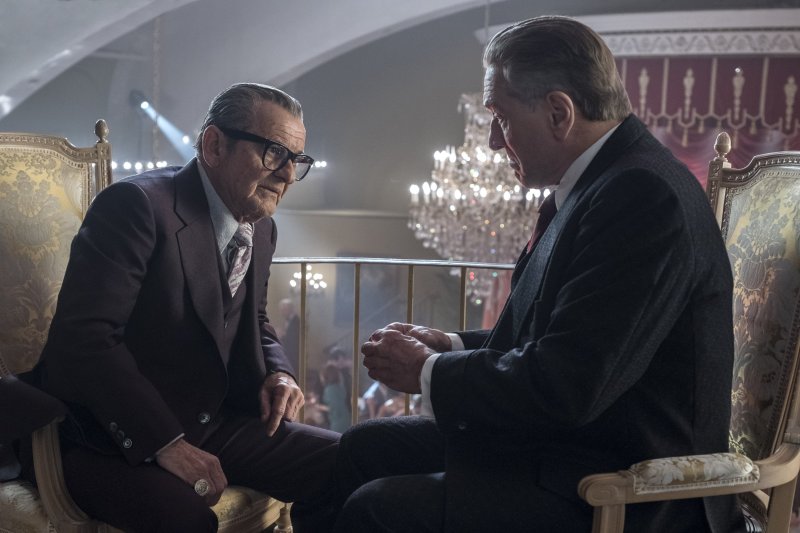 Mr. Pesci is batting .500 in this classification up to this point. His previous nominations came in Martin Scorsese projects, and surprise, he gets a third nomination after coming out of retirement for another Scorsese film. Again he is a gangster, but this time a more mellow and thoughtful hood than the volatile Tommy DeVito of Goodfellas. This role is not particularity showy and in fact, I thought it could have been played by a number of other actors. What he brings is the gravitas of his past performances to pump up a character who is largely peripheral to the main plot. He does have some nice scenes with DeNiro as he nudges the Irish thug into his crime family so there is something here, I would be surprised if this was his second win.

Tom Hanks- A Beautiful Day in the Neighborhood/Fred Rogers

Mr. Rogers was such a culturally recognized figure that it takes a pretty delicate performance to avoid doing an impression that would end up as a parody. There have been plenty of those over the years. Tom Hanks uses his quiet distinctive voice very effectively in bringing Rogers into the story. His deliberate pacing and even modulation are pitch perfect. It helps that the lines are also so well written. The most brilliant aspect of the performance is the recognition that Fred Rogers is not really the protagonist in the story, he is a critical secondary character.  Rogers was known for being famously kind and polite, so it made perfect sense to have the man that many would say is the nicest guy in Hollywood portray him. Hanks is not a doppelganger for Rogers, but hair, makeup and costumes also go a long way in making this a truly credible performance. 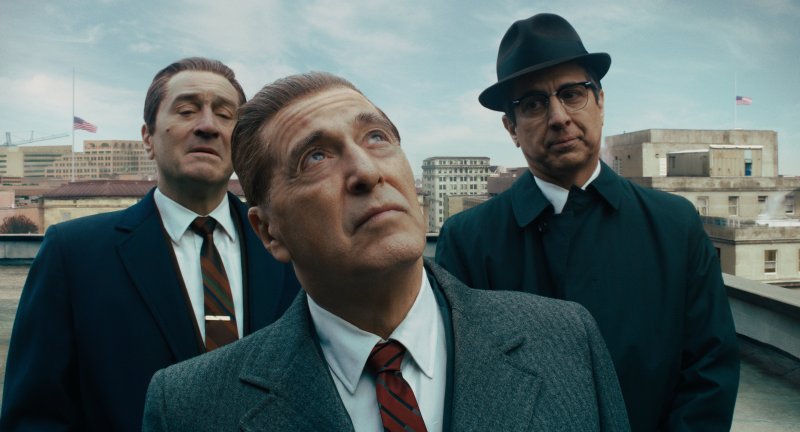 I grew up in a world where Jimmy Hoffa was as famous a public figure as any President or Senator or Governor. He was a powerful man who had a loyal union and he was not shy about battling the government over his authority. Al Pacino has been frequently bellicose in his performances since winning the Best Actor Oscar for being just that in “Scent of a Woman” in 1992. This is his first nomination since then, maybe it is a sign that he needs to adjust his style, because when he did so in “The Irishman”, he was so much more effective. He still plays a tough guy but he is disarmingly quiet in many of the big moments in the film. The way he seems to connect with the main characters daughter, effortlessly is a good example of that. Pacino conveys the pig headed nature of the Union Boss, and the obtuse way in which he responds to the gangster partners he has made is demonstrated in many scenes in the film.  He is the standout in this his first collaboration with Martin Scorsese.

This character is one of the most appealing features in a film stacked with actors doing great work and Tarantino moments that will stick with us for a lifetime. Pitt takes this detached, knockabout companion of TV star Rick Dalton, and turns him into a charming, sharp and ultimately lethal character.  It is never clear to me, how the line between Leading Actor and Supporting Actor is drawn. Pitt uses his magnetic smile and aw shucks demeanor to great effect when he faces down Bruce Lee, the Manson Family and his own dog. Cliff holds his posture in a manner that suggests he is casual, but in any situation we can see he is really the alpha, even if he is willing to pretend otherwise. He takes many of the essential qualities of Kurt Russell, and underplays them, especially in his few scenes with Kurt himself. The clincher of Pitt’s performance however is the stop at the Spahn Ranch where he deals with those damn hippies. This is my pick for the winner in this group.