No my friends, I did not fall off the face of the Earth, although there have been some days when I wish I had. In the month since I last posted, my world has been one of great ups and horrible downs, and I’m not going to go into that in detail. Just suffice to say that my perspective on this film might be influenced at times by my own emotional jumping jacks, so this will be a first pass at a written review. I will probably come back and re-evaluate the movie when my head is clearer and it is awards time. I am pretty certain this film will be up for a number of end of year accolades. the question is, should it be?

The first teaser trailer for this movie doesn’t really tell any of the story or give you much context, all it really does is tell you that this movie will be different, and brother is it. This is a grueling examination of a man’s mental collapse and the consequences to the rest of us when such obvious problems go unaddressed. It is also easy to sympathize with the main character up to a point. He is down trodden but still game, he lives a fantasy with his mother that all is well, and some moments he appears to be warm and tender. That however is the point of the movie, appearances are deceiving but pain will not be fooled, it will win out in the end and woe to those in the way when it happens.  I have seen some political chatter on this film, suggesting it is an apology for one group of fanatics while at the same time inciting another group of fanatics. I don’t see either of those as credible evaluations of what the film presents. Only in the tortured machinations of some deconstructivist social thinker can those points make much sense.  The social failures in Arthur Fleck’s life are too numerous and diverse to lay blame on a political foundation. By the time the story is finished, you will be horrified by what happens, not inspired to act out, or, you will be frustrated by storytelling that takes advantage of the Batman/Joker trope that the Joker always lies.

The performance of Joaquin Phoenix in the lead will be one of the safest points to make comment on. His acting is effectively tortured and creepy in the right spots, but he also manages to beguile us on occasion as a misunderstood outsider who has simply run into a number of difficulties that have warped him. Physically, as other actors before him have done, he transforms his body into an emaciated skeleton with angles and crevices that are disturbing to think about. His vocal performance is calm, despite the condition he has that results in uncontrollable laughter at inappropriate times. His interviews with the social worker are all controlled rage while seemingly subdued on the outside, Once his full transformation is achieved, the part is much more standard. Of course standard Joker would mean over the top behavior and Phoenix manages that as well.

Assuming one half of the story we are given is true, and that is a big assumption, it seems improbable at best. Maybe Gotham City is a powder-keg waiting for a spark to ignite it, but we never see any of that. The resentment of the rich is a media transference from the status of the first people who feel  the evolution of Arthur. The earlier beat down he suffered had little to do with economic necessity or social inequity, rather it is just a typical moment of horror that we have seen on the news regularly for years. A random pedestrian cold cocks a man on the side of the head, and that man dies. On lookers participate. These days the participation might be recording the incident instead of intervening. It is still reprehensible. When Arthur is attacked the second time, we can root for him like Paul Kersey, it is an act of self defense. However, we see Arthur lose control, he is no vigilante at that point, he is a monster. The creation of a rich versus poor dichotomy in this vision of Gotham is the invention of media types, willing to exploit an opportunity.

The movie is brave in a way most commercial films are not. Todd Phillips and Scott Silver are not afraid to let us see the emptiness that Arthur faces on a regular basis. The world is concentrated gloom delivered in a visual style that is dark when it comes to the colors but lively when there are dramatic moments to play out. Phoenix dominates the scene most of the time but the peripheral characters are important as well. To me the most troubling aspect from the view of someone who might be a comic book aficionado is the portrayal of Thomas Wayne ans an indifferent corporate overlord. We get a completely unnecessary retelling of the events that propel young Bruce to his future, and I get the feeling it was only included to remind us of the universe this story is supposed to take place in. This is actually a second DC Comic based movie for actor Brett Cullen who plays Thomas Wayne. He was also the Congressman who gets taken for a ride by Catwoman in “The Dark Knight Rises”.  The political aspects of the film are minor details to the main story which is the de-evolution of the protagonist. 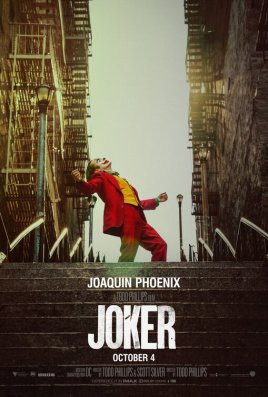 I like most horror films, so I have a high tolerance for bad things happening to people. I don’t care for torture material however and the length of this movie and the absence of any other perspective does make it seem a bit torturous to watch. If you find any humor in this experience, at best it will be of the morbid variety, and there will not be laughter but head shaking. Really, I feel as if I’ve seen a movie that is important, but I have a hard time explaining why. I think the film is compelling but it is repugnant at the same time. I wanted to praise it more than I can but I also want to damn it more than needed. Forget all the political/social justice baloney that people will try to cram down your throat, this is a film that can provoke a good discussion without mentioning ant party, issue, figure or cause. Maybe that is the best justification I can give you for seeing this, you want to know what you are talking about.