I’m all for good will for original films. I don’t want the world of movies reduced to Comic Book spectaculars and star driven franchises. There need to be good movies in all different classifications. Here is a tween comedy, with a risque script, foul mouthed kids and tons of sex and drug jokes. It’s really fine and you should go see it, but be warned, the film is not as funny as it is being hyped up to be. This is a solid double for a summer youth comedy, it is not “Animal House” or “Superbad”. In fact, as the movie goes along, the title becomes more and more apt.

Three kids, who are friends, are reaching maturity and like all insecure kids, they look for validation from their peer group. Most of what follows you have seen before, it’s just that this time the kids use some language that they just don’t use correctly. They find answers in the wrong places, and they make a couple of bad choices along the way. It is standard comedy material with the age twist being the main hook to the film. 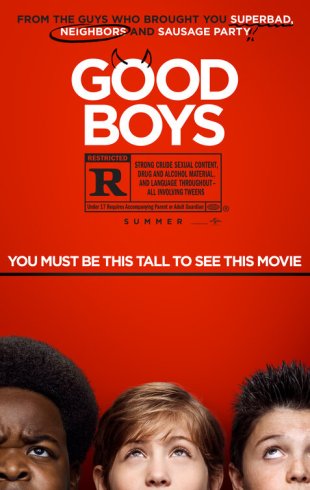 The title gives away the main point of the film. Despite the hi jinks and foul language, these truly are three good kids just dealing with oncoming adolescence. They are friends, you know the kind of friends we have seen in movies like “Stand By Me” and Television shows like “Stranger Things”. The story arc doesn’t force them into a deep discussion of their relationships, there is too much insanity to focus on, but you can see that it is coming. All the kids question one another actions, with the best intentions but are incapable of diverting from doing something awkward and usually stupid.

Unfortunately, the best gags are in the trailer. Those moments play pretty well but there are some punch lines from the trailer that are missing in the film and the humor is softened a bit as a result. I had at least two hard laughs at things that you haven’t seen yet so that feels like a strong recommendation to make, but everything else is merely amusing rather than thigh slapping -spit in you eye uproarious.

I don’t want to steer you away from “Good Boys”, they are in fact pretty good. The sweet and sentimental aspects at the end of the movie are fine, it just may not be what you were expecting. If you can control your projected love of the idea of the film, you will be fine. Lower your sights and have a good time.