“Yesterday” is a delightful little fantasy, that has little on it’s mind but everything in it’s heart. It is a love story about the music of the Beatles and the love of music in general. There is also a romantic element that weaves through the main story that dramatizes some of the same ideas that are being told in the main tale. Ultimately however, it is merely a fantasy film, designed for audiences that care both about music and the nostalgia of history.

The premise is pretty well summed up in the trailer. After an accident that results from a worldwide blackout, Jack Malik, an unsuccessful, struggling musician, is the only person who seems to know the Beatles. It’s as if Thanos snapped his fingers and just wiped out part of cultural history, rather than half the population of the planet. Like most fantasy, you have to be willing to go along with the conceit and not worry about the logic behind it, because there isn’t any. Much like a body switch comedy from the 1980s, we don’t need to know why the phenomena occurred, we just need to handle the consequences. Jack remembers the songs and lyrics of the greatest pop music ever written and starts reproducing it for himself. Himesh Patel has a face that conveys defeat and frustration at every turn. His failure to connect with an audience outside his circle of friends is sapping his spirit and draining the passion he has for music. The chance to make a success out of his life by claiming the music of the Beatles as his own offers him a conflict that we as an audience can sympathize with. He becomes the greatest plagiarist in history, but he does so in the most guileless way imaginable. He just wants to play the songs. Success is great but he knows he is riding on the work of someone else, but those people will never be able to produce the material themselves.

Jack’s school chum Ellie, has been his manager for all of the time he was not a success, and she steps aside for his career to advance because she can’t really represent him effectively, without altering her life too much. Lily James plays Ellie and she is lovely and sweet and as a secondary character asks on multiple occasions, why have the two of them never gotten together.  Much like a time travel story, “Yesterday” wants us to think about the opportunities that we missed along the line and ponder why circumstances end up as they do. Jack and Ellie seem perfect for each other but after years in the “friends” zone, they are making choices that are fall back positions. Ellie withdraws to a new relationship and Jack pursues fame and fortune with the Beatles songs.

The music is of course terrific, we can thank Lennon and McCartney for that. Patel performs the songs with passion, and although he has a good voice, it is clear why he never made it on his own. The songs he writes are not bad, they simply lack the magic that came from the musical genius of the fab four. When people hear the tunes and the lyrics, they are captivated by the music, not the musician.  Success feels hollow for Jack because he has lost his friend and the songs are not his own. There is a building plot point that concerns whether he will be revealed as a fraud, and in fact he has a nightmare about that possibility. The resolution to this plot line is a good twist and it has one of the most satisfying “what if” scenes that a film like this wants us to speculate on.

It is interesting to think about the way the world might be different if the music of the Beatles did not exist. There are references to some contemporary artists who certainly were influenced by the Beatles but they seem to be unaffected by the disappearance of  John, Paul, George and Ringo. While this might make a logical movie feel off completely, this is a fantasy, and the story gets by simply by acknowledging one influence that would be altered, instead of making it as widespread as it clearly would be. That reference was my biggest laugh in the film, it also opens up another line on music for Jack to take advantage of if he keeps going.

The music business is also lampooned a great deal. Kate McKinnon arrives to manage Jack’s career and make him rich, but mostly make the record company richer. Her greed based, heartless music executive is a stereotype that we will recognize, but she also knows how to manipulate Jack by using his own momentary short comings to guilt him into her way of thinking. Ed Sheeran plays himself, and he cheerfully goes along with sending up his own image. In fact, he may be a little too brutal on himself for comfort. 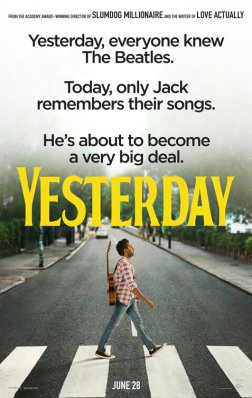 Screenwriter Richard Curtis takes a premise he created with another writer and makes some magic that will be very recognizable to fans of “Love Actually” and “Four Weddings and a Funeral”.  It is possible that he is mining the same material from his own film from 2013, “About Time“, which has many of the same fantasy elements and dilemmas. This movie is directed by Danny Boyle, who will not be doing James Bond but still can end up on an anticipated list of movies that I want to see. “Yesterday” is a good sized hit for the kind of movie that it is. I think it plays to an older audience because of the Beatles connection, but the young stars probably have added to it’s appeal for a younger audience. If the Beatles music means nothing to you, feel free to skip this movie. But if you are a part of the population with the good sense to know how important that music is, I suspect you will enjoy the film in spite of some flaws along the way.