The last day of the Festival is always a bit melancholic, after waiting a whole year for the event to arrive, it is suddenly on the brink of departure for another year. However, just as we try to enjoy the days off after Christmas, the last day of the festival should be something to treasure as well. If you can find a romantic comedy starring Cary Grant, I think you are onto the path for success in overcoming your doldrums. If the movie also features Katherine Hepburn, my goodness you have hit the Jackpot.

There were a couple of things that were hard for me to believe about “Holiday”. First it was hard for me to believe I’ve never seen this movie before. I’ve seen “The Philadelphia Story” dozens of times and “Bringing Up Baby” is also an old friend. Grant and Hepburn only made four films together. I don’t have any memory of Sylvia Scarlett and I thought I might have watched “Holiday” at some point but as it played out, it was clear to me that I had not. The second thing that was hard to believe was that this movie was not screening in the main house for Sunday morning. This is just the kind of film that should bring all the classic buffs to a theater on a lazy Sunday morning at the festival. The crowd was quite large for the event, and I don’t know if there were disappointed fans turned away. As far as I could tell, the big house was not being used at the time so it probably could be done. Well, I’m not in charge of programming and I’m sure someone wiser than I calculated all the relevant factors.

There is a sense of the same kind of madcap foolishness in this film as found in the two pairings of the stars I had seen. Grant is an investment accountant of modest background who falls in love with the daughter of a millionaire. She loves him back but it becomes apparent that she has reservations about his odd life plan. He hopes to score an economic windfall that will allow him to retire on Holiday as a young man, and then get back into work when he has that experience behind him. The eccentric sister of Grant’s fiance is Hepburn, who approves of him when the others in the family have their doubts. As a critique of greed and convention, “Holiday” is a little light in themes, but when it comes to what a real love entails, Hepburn has it in spades over her bifurcated sister.

The morning hosts were Diane Baker and Ron Perlman. They talked generally about classic movies but did not have many specifics about this film. The conversation was fun but not essential to this experience.

On the previous day, at the Fox Appreciation event, a nice clip of “The Robe” was shown, that highlighted the width of Cinemascope and the beautiful cinematography. I’d been a little uncertain about what we might see at this time slot, but that moment settled it for me. It was also fortuitous that this showing of the film was happening on Palm Sunday. There is even a sequence in the movie where we see Jesus arriving in Jerusalem and the crowd waving their palms in the air.

The crowd at the Egyptian was solid but not entirely packed. Our host for the screening was President of the Motion Picture Academy and celebrated cinematographer John Bailey. If you look at the list of movies he worked on you will be suitably impressed. Of course Amanda and I appreciated that he filmed the recent Lambcast Movie of the Month “Silverado”. It made complete sense for a director of photography to talk about this film, since it was the first movie to be produced in CinemaScope. Mr. Bailey provided a brief guide to the process and explained how the focus has to be adjusted by the lenses that are used in the process. It appears that the Technicolor label on the film is a bit of a misnomer because there was a new film stock used that had been created by the studio for it’s new process, it was simply that Technicolor had to do the corrections and prints.

The film stars Richard Burton in one of his first prominent roles. There is definitely a vibe around his character that is similar to Ben Hur, but in reverse. He is a Roman Tribune who is banished to Jerusalem because of a contentions relationship with soon to be Emperor Caligula. He and the slave that he has outbid his rival for, arrive in time to participate in the Crucifixion. What follows is a religious conversation and a variety of spectacular sets.  Victor Mature is quite good in his part but he is definitely a supporting player. The part of Caligula was played by actor Jay Robinson in his first big screen performance. He is incredibly over the top here that he might have had trouble getting subsequent work, except he has a distinctive voice and eyebrows. 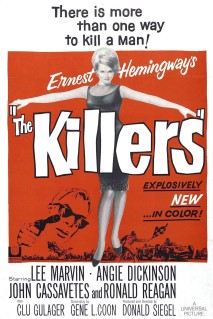 I had long heard of this movie but I have only a vague memory of seeing clips and those were black and white [at least in my memory].  This is supposedly a loose remake of an even more loosely adapted Ernest Hemingway story. I can’t testify to either of the previous sources, not having seen them, but I can say I see some Hemingway roots. The men in this film are all tough and fatalistic. The woman is cold and duplicitous. I also understood the film to be a low budget TV production that instead got a theatrical release. Well let me tell you, it does not play like a TV movie at all.

Director Don Siegel was the right man for the job. The story is told through a series of flashbacks and there are some brutal moments of violence that the camera does not turn away from. Just as in the future collaborations with Clint Eastwood, the possibility of violence floats under almost every scene and the characters are not sentimentalized at all. This was shot in color, and it does look like the kinds of color timing and saturation that you might get in a TV movie but it all worked well.  There are a half dozen really solid actors in their parts and I was impressed with the cast list as it came up on the screen during the titles.

Norman Fell and Claude Aikins are well known television actors, and both made frequent forays into the theatrical film as well. Clu Gulager is also a staple of television but has been in some of my favorite movies over the years including “The Last Picture Show”, “Into the Night” and “The Hidden”. He is also still working, he is going to be in the Tarantino film coming this summer. I think his role here was maybe the biggest part he had. He is a sadistic hit man who is partnered with Lee Marvin, so he is in the film for most of the running time. The image he cultivates with the ever present sunglasses is one that is always threatening. Lee Marvin owns the picture although you never think of him as a hero, he is clearly a bad man, he is also however a clever man. The two killers figure there must be a financial reason behind the hit they pull off at the start of the film and they plan on getting a part of the pot.

John Cassavetes is the doomed race car driver who gets involved with a mystery woman played by Angie Dickinson. He is very low key in this part until the final sequence of flashbacks that shows us when he ended up being dead, long before his actual death. Angie Dickinson plays a femme fatale who has eyes for more than one man in the story. She was the guest at the screening

The real revelation in the movie was Ronald Reagan. This was his last film, and although he reportedly hated playing a heavy and the slap he gives to Dickinson, he was really quite good in the part. Reagan always had charisma on screen, but he was usually most effective in a secondary role rather than trying to carry the picture. This movie shows that in addition to the charming comedic parts he usually played, his range could be broader.

This was a heavily attended program and we were in the last group to be admitted to the theater. I felt we were fortunate to get in and see a great star like Dickinson, who was generous in her praise of everyone in the movie. She said that even though she is a Democrat, she thinks everyone can agree that Reagan was a good President, but she also thought he was a good actor. Someone in the crowd is a friend of Clu Gulager, and we got a little shout out from him via a text message of greeting to Angie.

Although there were still opportunities to see some more films at the Festival, Amanda had to be at work early on Monday, and all the screenings were not going to finish until nine. We skipped another film and the closing party, and headed home, completing the 2019 Festival with a very satisfying piece of crime film and history.