Yesterday was a Chris Pratt film Festival for me. In the afternoon I saw the LEGO 2 Movie and in the evening I took in this slow paced western. I have to admit it is easier to like the animated film. It was light, with a lot of laughs and rapid paced action. This in turn moseys along at a very deliberate rate. It was not boring but it feels like it was much more methodical in telling the story than was necessary. That may be because the film is directed by a second time feature film director, actor Vincent D’Onofrio. The film is competently put together but it does have some flaws.

The script by Andrew Lanham is attempting to provide a backstory for the notorious Billy the Kid while also showing the last days of the Kid. Basically, a fourteen year old boy is trapped in a nightmare family scenario and it is strongly hinted at that he may be traveling the same path as William Bonney (Henry McCarty). It is a morality tale that tries to warn us off of the path of violence at the same time showing the violent nature of the men who are the heart of the story. “Pat Garret and Billy the Kid” follows the same material but was more focused on commenting on the dying western tropes. In Sam Peckinpah’s hands it was an elegy, D’Onofrio makes it more of a cautionary story.

Actor Dane DeHaan was not my favorite part of “Valerian and the City of a Thousand Planets“. In fact, DeHaan was terrible in that film. I thought he was much more effective in this movie. The character of Billy the Kid is all twitchy coiled danger and DeHaan’s face is a perfect canvas for those characteristics. He speaks in a low key manner and expresses the kind of swagger and confidence that the notorious outlaw is known for. Ethan Hawke is Pat Garret, a grizzled mirror of Billy’s character. They took different paths after the Lincoln county war but hey both were hired killers at one point, and Garret seems to have developed a moral backbone wheras Billy is clearly flexible when it comes to right or wrong. 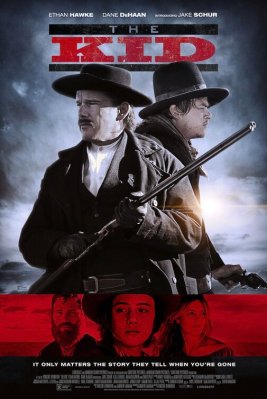 Our young hero, Rio, played by first time film actor Jake Schur, the son of two of the producers of this film. As a child/adolescent performer he is competent but does occasionally have some wooden moments. Rio is caught between the two legendary gunmen and has to figure out which path is the right one to follow. Neither seems to be a pleasant future for the young man. His Uncle is pursuing he and his sister who have fled from a family tragedy. Uncle Grant is a horrid human being without an ounce of redeeming qualities. That he is played by the usually charming Chris Pratt is the casting twist that this movie offers. He was believable as a louse who is ready to ruin the rest of the family for pride and avarice. The only part that was not convincing was his beard.

Pratt, Hawke and D’Onofrio all worked together on another western, the Denzel Washington remake of “The Magnificent 7“. Perhaps that is the genesis of their working together on this movie. Westerns are few and far between these days and the fact that this trio was involved in another western just three years , suggests that it is no accident that they are all on this project. There are several moments of violence in the film, so there is action but you would not really think of this as an action movie. The director chooses to show more than is necessary in some scenes, for instance there are long takes in the wagon that is used to transport the captured prisoners back to the jurisdictions where they are to be tried. The music for the film sometimes echos the music for the Kristofferson version of the story, but the final song is not written by Bob Dylan. The movie aims for something deep but because it is so ponderous at times it simply feels oppressive. In the end I would recommend it but only for fans of older style westerns.