A slow burn with a heist that does not carry much weight in the end. “Widows” is a quality film about a criminal enterprise, unfortunately, it is the political system in Chicago as opposed to the robbery that is at the heart of the film. The cast for the film is impressive and the story is full of unpleasant twists but there is something about it that holds me back from a strong endorsement. Those who want a slick crime film will be disappointed because this movie travels down some byzantine alleys and the thing that is around the next corner is usually a downer.

The grime and decay of the neighborhood featured in this movie should be enough to tell you this is not “Ocean’s 4”. There is nothing cute or charming or fun happening here. This is a story focusing on rich criminals robbing each other in the midst of urban decay and neglect. That the criminals are all politically connected should come as no surprise to anyone familiar with how things work in these big urban centers. One crooked deal makes way for another and the only thing more depressing is that everyone considers this de rigueur. The only thing that changes is who gets the power. This movie attempts to shift the power to a group of women by turning them into reflections of evil men. I’m not sure that is the best way to create a story of female empowerment.

It is a little hard to tell what the basis of the opening theft is. The story starts mid-crime when there is a shootout between the robbers and the security team for a local thug who has delusions of political grandeur. Half an hour later we see what happens to those crooks who were supposed to be providing security and got taken. They should have just asked to jump in the van and take off with the money. As it turns out, getting tagged and tracked down to a local warehouse is part of the plan. I can tell you that this detail was not included in the notebook containing the plans for all of the criminal masterminds plans. Viola Davis is an excellent actress and she shows her worth in a couple of grieving scenes. Her husband has been killed in the robbery and her moment trying to gather herself rings very true. In a flashback, we see another death that she mourns and again, it plays realistically although that death plays like a note from a producer on the film who is a little too “woke”.

As the widows begin to plan their robbery, there are several tasks they have to accomplish. Michelle Rodriguez has a very solid scene where she gets caught in a lie and still manages to get a piece of human behavior awkwardly into the moment. Had it gone any further, the moment would seem unrealistic but the guilt and the loneliness of the two people involved really does provide some emotional core for what is otherwise a very cold film. Elizabeth Debicki has the only moments in the film that could be thought of as light. As she tries to get a proxy to buy guns for her, she uses a story that is grimly amusing. Unfortunately, as we have learned, physical abuse at the hands of a man is not a fiction in her life. Cynthia Erivo who I just saw in “Bad Times at the El Royale” is equally good here as a babysitter/hairdresser who gets recruited for the job and turns out to be just the right touch of bad ass under the skin. 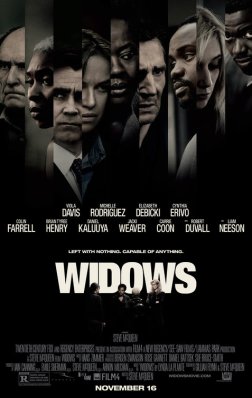 As for the rest of the cast, well there are a lot of them and most are solid. Lukas Haas who I just realized was in “First Man”, is a man with a cynically realistic view of romance who enables the women to get a key piece of information. Garret Dillahut makes a second appearance in a Steve McQueen film and this time he is a lot more sympathetic. Colin Farrel, Bryan Tyree Henry and Robert Duvall, dance around each other as political hacks with ambitions that confound each other. Jackie Weaver is the most cynical Mother you will ever hope to meet. It is Liam Neeson however who manages to turn a small roll into a strong performance and with one plot twist turn most of our assumptions around. What starts off as grief turns to long term resentment and finally to the worst sort of betrayal you can imagine. Finally, Daniel Kaluuya lurks in the background, menacing everyone with his crazy eyes and and reckless disregard for humanity.

The exposition that goes on in long conversations between the characters often reflects danger but it is not just physical danger but moral danger we are facing. Only the very last shot in the film provides any hope that the world might be an OK place to live.There was a point in the story where the worst crime we can see coming is directed at an animal, but at least the immorality of all of the characters is not taken out on the dog.