Frankly, I may not be in much of a position to give this film a fair and objective evaluation. There has been a huge amount of upheaval in my life in the last month. My emotions are very heightened at this time and as a result, my reactions could be influenced by my state of mind. With that caveat in your head, let me say that the emotional journey this film takes you on is likely to be one of the most satisfying in many a year. This is a third retelling of a story that is very well known now, but it manages to get a lot of mileage out of the romance and heartbreak of a love story with a blossoming career and a exploding one as background.

First time director Bradley Cooper has managed to not only get a naturalistic performance from his first time star Lady Gaga, he has directed himself in an honest and mostly low key performance which is filled with examples of both their talents. “A Star is Born” is an adult story with enough bells and whistles to make a less introspective audience happy as well. While it does have some modern sensibilities like brief nudity and frequent use of the worlds most over indulged adjective, it still maintains many of the traditions and touches that the older films have. Hell, the font for the title could easily have been used for the 1954 version of the story, and the placement of the star in that title frame is all about the notion of an emerging star as envisioned by audiences in four different decades before.

You know that Lady gaga can sing. She has a powerful voice and a great range that she uses with much greater subtlety than most of today’s divas. The first song she does is a rendition of classic era tune that is primarily French. The subsequent moments as her talent emerges in front of the eyes of Country Rock Star Jackson Maine, are heartfelt modulated nearly folk performances. The chanteuse that will arrive in the second half of the film, identified with a single name like “Cher” or “Madonna”, is much more contemporary pop icon, but as the reticent songwriter who is falling in love with the bad boy singer, Lady gaga emulates a striking but contained sort of performance. Her songs fit the audience she is thrust in front of and her voice matches those expectations. Cooper as Maine also manages an amazing range of vocal performances. For a guy who is not really a singer, he sings really well.

When this story moved from backstage Hollywood to the concert stage in the Streisand version, we got a chance to see the talent of the male lead instead of merely having it talked about. Kristofferson was well cast and effective, but Cooper manages to project a real artist on both the stage and in the love story. The success of this film is largely due to the fact that the lead actor’s story is finally presented as an equal plot thread as opposed to something merely for the lead actress to react to. The duets and collaborations here go much deeper than other versions which makes the romance more effective. Ally is not a milquetoast woman standing by her man and quickly overlooking his flaws. Lady Gaga gets some real hurt in her eyes at some of the events that happen in the story. The screenwriters have set up some of that personality but she is the one who manages to carry it off.  Even when she does seem to simply be loyal to Jackson despite a humiliating public experience, she does so in a way that suggests the kind of fed up tolerance that someone in love really feels.

Gaga doesn’t have to worry about another female drawing away from her role, she is largely the only woman in the main cast. It seems a little unfair that the star part has to be supported by so many men, but let’s say that it is a pretty great set of men. The always welcome Sam Elliot gets to be the rationale voice in the head of Jackson’s character, even when his character ends up estranged from the singer. Ally’s Dad is played by none other than Andrew Dice Clay, who continues to show that he has talent as an actor, dismissing any criticism of his long time role as stand up provocateur. Dave Chappele and Eddie Griffin ditch their funnyman backgrounds as well and step up as minor characters in the most romantic sections of the film. 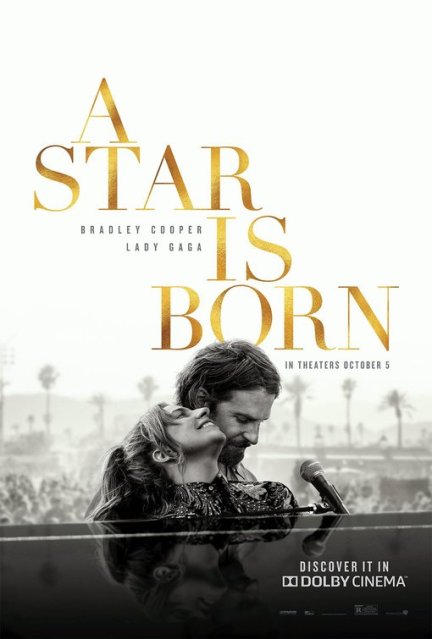 There are a dozen great songs in the film and another dozen that are wholly satisfying without necessarily being great. “Maybe Its Time” “Shallow” and “First Stop Arizona” were the standouts for me, but the gut punch end song “I’ll Never Love Again” resonates too much for me in this time of my life for it not to be my favorite. Maybe I have always been too sentimental for my own good, but when I hear the words to that song and think of my own life, I wept. This film may have flaws that will be more noticeable on second and third viewings, but at least you are going to want a second and third viewing.