In hosting the Lambpardy episode this week, two of the guests mentioned this as a rave for the week. Now I had planned on seeing it later on, but when a window opened up, we dove through based largely on the positive word of mouth. I will say that the movie is entertaining and there are some good laughs to be had here. I don’t want to oversell it however because while it is worthy, it is not something that requires an immediate watch.

The trailer introduces the concept pretty well, but like a lot of trailers, it also gives away a couple of the better gas or “tag” lines from the movie. When you see the phrase “based on a true story” in the sales material for a movie, you should always be cautious about believing too much of what you see. The article that this film is based on was in the Wall Street Journal back in 2013. I suspect that the emotional depth that this film goes for toward the end was better covered by the Journal, because you can clearly see what some of the embellishments in this story are .

Five adult friends have continued a game of Tag that they have played in the month of May for 30 years. That is the premise of the article, and that there were sometime elaborate tricks played to tag the next person, some of which do get used in the movie. What is certainly been added is the notion that one player has never been tagged and that the group members will resort to physical aggression in pursuit of the game. Basically, the whole of Jeremy Renner’s character. “Jerry” is the master of the game and he also happens to be a fitness guru who knows six different types of martial arts and participates in “free style running” as a hobby. This is the material that clearly marks this as a movie entertainment rather than an essay on friendship and the factors that sustain it.

I think Renner is an excellent actor, and he makes some very interesting choices when choosing his movies. Having been tapped to be in the Avenger’s films [except Infinity War] he has done serious work, like his awards worthy performance in last year’s “Wind River“,  but he has also made films that are clearly just commercial projects with some schlock thrown in, “The House” or “Hansel and Gretel :Witch Hunters“. “Tag” falls somewhere in the middle. There is a theme here that has some depth to it, this mostly comes out in the last twenty minutes of the movie, but there is a lot of movie wise guy cleverness that also takes up a bunch of screen time. For example, Renner internal monologues his responses to the various attempts to tag him. He sounds like Robert Downey Jr. in his Sherlock Holmes mode. It is completely unrealistic but that doesn’t mean it’s not fun. 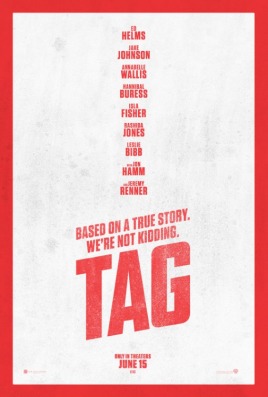 Ed Helms, Jake Johnson, Jon Hamm and Hannibal Buress play the pursuers, each with quirks and motivations that add something amusing to the story. Johnson portrays the future of those states with legal pot businesses, a customer who has lost motivation to do anything else. Hamm is the successful executive who can’t let his failure to tag his friend go. Buress is an emotional cripple who gets the least about of backstory but who does get several nice lines during the game. Helms however is the main protagonist and he has played this part in “The Hangover”, “We’re the Millers” and others for a decade now. He is a pro at these parts, you know exactly what to expect from him. Isla Fisher gets a chance to recapture the mania of her performance in “Wedding Crashers” as the wife of Helm’s character and an even more competitive person than her husband. Leslie Bibb lampoons a dozen characters she has played on television or in movies with her needy version of Renner’s bride to be.

There is not really one of those mid credit sequences or post credit coda’s that dominate the comic book movies these days, but if you leave when the credits start, you will miss two big laughs. Renner and the rest of the men do a version of the Crash Test Dummies song from the 80s. Renner can actually sing but it is still funny. There is one final touch at the end of the song that will bring a smile to your face as well.