You Were Never Really Here

This is a thriller in the broadest sense of the word. It has many of the tropes of an urban thriller; a lone hero, a deep conspiracy of the powerful, an innocent who needs to be saved, and a variety of criminal elements. If you were to group this in with an action film or another Liam Neeson film, you would be so off the mark as to be at risk of hitting your own innocent bystander. One of the reviews quoted in the trailer refers to “Taxi Driver” as its’ counter-part. That is about as close as it gets to any other movie you may have see. The Scorsese film from the seventies has some of the same points, and another isolated hero. Unlike Travis Bickel, “Joe”  lives in a more average surrounding, but his psychosis is probably deeper, darker and more paranoid than anything you have encountered before.

Director/Screenwriter Lynne Ramsay, has visualized the story as a series of images and nightmares. The narrative is mixed with the nightmares and the result is something disturbingly hypnotic. In some moments, Joe is a fierce enforcer of the task he has been set. His grim facade and deliberate pace make him feel very much like a robot set on a program that cannot be moved from it’s goal. Just when he seems to be a mechanical drone of a killing machine, he shows flashes of humanity, vulnerability and confusion. He seems to care for his mother but she frustrates him. There are frequent flashbacks to their early life, and the violent nature he possesses seem to have been both bred into him and taught to him. His dark visions of childhood conjure up a dream of death that he sometimes acts out. This is not auto erotic asphyxiation,  Joe is both suicidal and indestructible. He is testing the limits of both feelings on a regular basis.

It also appears that this PTSD is not limited to experiences from his childhood. Joe seems to have served in one of the Middle Eastern Theaters and seen some things that have left scars. Ramsay does not dwell on these events, they come up as brief flashes and we never see a full picture of what has befallen the man he was. Whatever it was it seems it was pretty ugly. An easy chair psychologist might look at the victims he encountered overseas and put that together with his current crusade, but such psychoanalysis seems simplistic for the complicated figure that Joe is. Joaquin Phoenix seems the perfect choice for this role. His reserved style of speech and his quiet face represent the coiled danger that Joe carries around with him. He seems to still have a tender heart at times as he responds to his Mother’s voice singing an old song from their past and he needs to join in. His willingness to sit with her for a few moments as she goes to sleep also seems like a dutiful son, but his dark side does crop up with visions where their life together disappears in a moment of violence.

Joe has contacts but not really friends. He is so paranoid that when there is a chance encounter with some one who knows him from his violent life, sees him in his home life, a partnership will come to an end. As it turns out, his paranoia is somewhat justified. His job leads him across the path of dangerous people. The plot is never clearly explained. This is one of the nice things that makes this movie unique. Not everything is spelled out for you but if you have imagination, you can figure out as much as Joe. Again, his dark visions tell us as much as the narrative does, and they usually substitute for too much detail. Another visual touch that director Ramsay adds is to let us see most of his rampage in one location, only through security camera footage without sound effects. There is still score but the silent acts of violence seem unreal, as brutal as they are, and morally as justified as they are.

When it is clear that a twist in the story has taken place, we go in several directions at once. In a seventies thriller, the plot would all be about how the twist must be dealt with and the enemy punished. That is the way this film seems to be heading, but there are more curves ahead and each one brings this film to a new point of view that continuously challenges you. Joe may be driven nearly insane with revenge, but sometimes his empathy manages to get the best of him. If you have disdain for the seventies song “I’ve Never Been to Me”, by Charlene, prepare to reassess. In one of the boldest moments of the film, this song plays out through a moment of horror and tenderness. It is an honest gesture that feels so odd but also so right.

Speaking of music, this has a muscular synth score by Jonny Greewood who was recently an Oscar nominee for “Phantom Thread”. Mixed with contemporary songs and also old classics, the music creates moods and images that match the energy or actions of the scenes in an eerie manner. It is almost good enough to make me go and listen to Radiohead, a band that he is a member of. Along with the sound design of the film, the music adds to the hypnotic atmosphere. This film is a slow burn but it is anything but tedious. 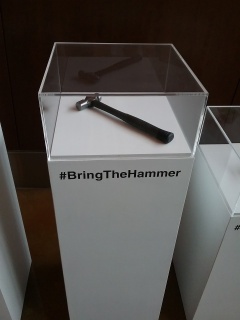 As Joe envisions what he might do, there are some amazing visual moments. The asphyxiation issue is combined with a counting mantra that both Joe and the young girl he is trying to help use. That they go in opposite directions and mix and then change is another great choice by the director. Late in the film there are some incongruous visual moments with Joe and Nina. The harrowing effects of PTSD are not going to end for either of them and we know it by getting a chance to see the darkness repeatedly. The resolution of the film is inevitable and sad and satisfying. It is somewhat ambiguous but that seems all the more appropriate since It would be hard to say how much of what we witnessed was real and how much was nightmare.