I went back to look at my review of the original “Pacific Rim” and it is relatively positive. There is an acknowledgement that the premise is silly and the characters are thin, but otherwise the movie was fun. So consider this as a sequel to that review. My comments here will probably mirror the film in the same way that the original review mirrored the first movie. The depth will be less, the characters less interesting and story will be more incomprehensible. Five years ago I found the energy to make the review a little entertaining, today I don’t have the same creativity or motivation.

There have been so many films that have trashed the cities of the Earth in the last ten years, they all start to run together. For a brief moment, it felt as if this film was going to forgo that routine and do something more creative. For ten minutes we get an alternative world, where people are living as scavengers in the ruins of the cities that were destroyed in the last film. Two characters are quickly introduced and there is a homemade “Jaeger” to entice us. When one giant robot fights another, I had hopes that this would be something a bit different. Unfortunately, the two new characters that are introduced are immediately placed in the world that existed in the first film. We get a weak reboot of the training/drafting process and a potential threat from a technological improvement in the weapons is abandoned almost immediately for a development that makes almost no sense.  We do get some robot on robot action but it isn’t long before that morphs into the same thing with a different cast.

Sydney, Australia and Tokyo, Japan are the two cites that get busted up in this go round. There is a tasteful decision to convince us that thousands of people are not dying with every punch being throw and every monster waving it’s tail. The four second visual reference and one line of dialogue are meant to assuage our guilt about watching these cities be torn up. The more comic book aspects of the movie also help diminish the significance of the destruction. It finally is a little hard to worry that CGI building being collapsed means anything. It’s a bit like the destruction of Alderlan, we know what it means but it carries only symbolic weight, no real emotional consequence.

There are a few characters carried over from the first film, but to be honest, since I’ve only seen it the one time, five years ago, I forgot the role they played for the most part. John Boyega is supposed to be the son of Idris Elba’s character in the first film. I don’t think there was ever a reference to him in that movie, only to the adopted daughter who is his sister. Rinko Kikuchi is that sister and she does not get much to do. The other carry over characters are more important to the story but they make almost as little sense as the previously unknown brother. Scott Eastwood is fine as a rival character, he gets to be the butt of one good joke line, but mostly he is stoic and ready for action. Boyega has to try to match the spirit of the speech from his dad in the first film, and he just sounds like a cheerleader. 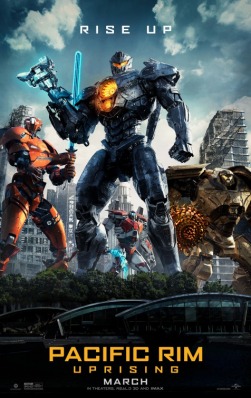 “Pacific Rim Uprising” is not interested in any social ramifications of the war against the Kaiju. There are a couple of places where some political and philosophical issues could be made a part of the story, but they are jettisoned immediately. The film does this repeatedly. It asks a question or raises a subject and then does nothing with it. The emotional loss of the movie characters is nil. Even the one character who announces that he will be dying by making a foreshadowing statement early in the story, gets denied the payoff that was set up in that earlier scene. The technology is never explained as it was sometimes in the first movie. Jerry-rigged solutions to complications that come up get done in time regardless of how much time might be needed to make any of it logically work. I can believe I just used a criteria of “logic” to judge this movie, because there is no consistent rationale for what happens, it just does.

The robots fighting each other and then fighting giant monsters is fun for a while, but it does get repetitive. There were no real human elements to offset the repetitive nature of these continuous battle, so the movie feels a little long and redundant. The end result is that this film will help you kill a couple of hours but not help you anticipate another time killer two years from now which is clearly the plan. That giant white gorilla movie coming in a couple of weeks, suddenly looks a lot more entertaining by comparison.