If it’s time for your weekly testosterone injection, here it is in a two hour-twenty minute dosage. This film has maybe three or for women with lines, and only one of them has more than a couple, and she is peripheral to the story. So this film will not be passing the Bechdel test this week. Instead, it will be filling the screen with about two hours of macho scumbags comparing the size of their members by the load carried in their modified AR.

This story is about how the good guys are the ones who kidnap and torture people to get information from them. That should tell you that the bad guys are even worse. This is the nightmare visualization of a major crimes unit in the L.A. Sheriff’s Department, led by “Big Nick” a bad man with a badge. They square off against Merriman and his crew of mostly former Marines who apparently are not interested in a regular form of employment. Seemingly stuck between them is “Donnie” a bartender with a criminal record for holding the fastest speeding ticket in California. He may be demeaned by the members of the outlaw crew, and teased about his penis size by the cops, but there is more here going on than anyone know. 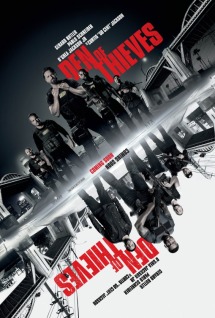 Gerald Butler is one of the producers on this film, a role that has allowed him to be featured in several of these kinds of movies in the last ten years. As Nick, he comes across as arrogant, dangerous and full of the masculinity that would be referred to as “toxic” by some members of our culture.  Pablo Schreiber is Merriman, the master mind with ice water in his veins. He is curt, judgmental and playing the angles. Nick and Merriman become a thing that drives the whole second act of the film.

Imagine that scene from “Heat” where cop and criminal take ten minutes to converse like people. This film is sort of the same idea, only instead of courtesy and plain spoken honesty, we get a game of one upsmanship. They trade insults in a restaurant, match skill at a shooting range and score with the same girl. All this is in a effort to show who is the biggest dog in the pound. This is a long slog with a lot of side routes. We get back story on each character, we learn of their weaknesses, but mostly we build tension because the release is what the last section of the film is all about.

Like all heist films, we are not let in on all the machinations that the master criminal has planned. There will be twists and turns and events that we can’t figure out at first. For example, I can’t figure out how the criminal crew got from Montebello to Downtown Los Angeles in five minutes on a Friday afternoon. The cops are also unpredictable, they start trying to apprehend the fleeing suspects in a traffic jam [the most realistic scene in the movie] where everyone will be in the killing fields between the cops and the robbers. The truth is once the fireworks start, it doesn’t matter if anything makes sense, because the adrenaline rush you’ve been waiting for is kicking in and you just want to sit back and take it all in. 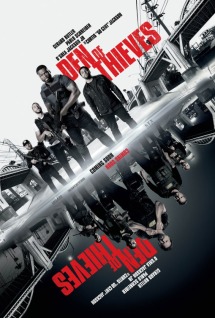 At the close of the film there is a reveal that has been hinted at in a few places but was not particularly well set up. The flashbacks establish a little bit of background but it still feels like a cheap exit to the plot. It is enjoyable, but it takes all the grittiness of the film and turns it into a “Fast and Furious ” moment that just seems out of place. The thought is not a bad one, but like a lot of these complex double agenda films, it depends on one character knowing ahead of time what every other character is going to do. It is simply more ambitious than it has any right to be, it does not feel earned.

The action is bookend in the film. The opening shootout is brutal and the final chase and gunfight is pretty exciting. Since none of the characters are very much emotionally invested, there is not much satisfaction in how things finally wind up. As stupid as all of it ultimately is, it runs the same amount of time as a couple of widely acclaimed films [The Tree of Life/Call Me By Your Name] and I was never bored by this the way I was by those pretentious pieces of art. Maybe there is nothing about this movie that is worth remembering, but it would not be something I’d avoid if it comes across the radar down the road. At least at the end I would know that I was being entertained momentarily.

2 thoughts on “Den of Thieves”