It’s hard to be dispassionate and analytical about a subject that you have been passionate about for forty years. Star Wars has been a cultural phenomena for that long now, and even casual fans can get carried away by the enthusiasm of anticipation and nostalgia. This film manages to hit most of the right buttons for the cosplay crowd, while still being accessible to everyone else. I suspect it will require a couple more viewings to be a bit more objective, but even now I can see a few things that are weaknesses from my view. They are not particularly significant to my enjoyment of the film, but they were more noticeable to me than the flaws of the last two Star Wars movie. “The Last Jedi” is a good story, surrounded by an ambitious production, with a couple of cinematic weaknesses that keep it from the perfection that so many are hyping now.

First, the good stuff. Just about every sequence with Mark Hamill works and gives him an opportunity to bring a character we have loved for a long time, some new dimensions. The callow schoolboy of the original trilogy has become a wizened figure of melancholy, but one with a great sense of humor. There are several light moments in the film that provoke a laugh, Hamill provides most of these, even though he is a character fraught with regret. Writer/Director Rian Johnson has given Luke an arc that is redemptive, cynical and blind all at the same time. Since I refuse to simply tell you the story, I’ll let you find out for yourselves, but the payoff at the conclusion of Luke’s story is emotionally satisfying to all of we fans who watched the original film in 1977. This is the best kind of torch passing you will see outside of the Olympic Relay. 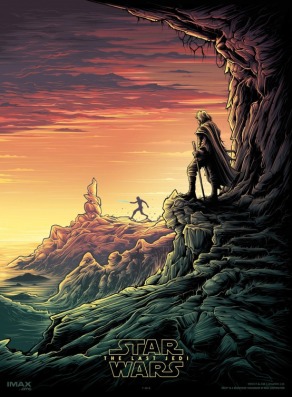 It’s been a year now since our Princess left us, but the character lives on in this film. Carrie Fisher has a significant role in this movie and she finishes her career with a strong presence in the film. Leia is haunted by the events from the last film in the trilogy, but she is needed more than ever by the Rebellion. There is no doubt that “the Force” lives in her, even though she is not a Jedi. Largely missing from the second act, her storyline through the rest of the film works well at keeping us connected to the reason that the “First Order” cares about a relatively small rebel force.

Many people, including myself, thought that “The Force Awakens” borrowed heavily from “A New Hope”. There were plenty of call backs but also it seemed that the story beats mimicked the original film to a fault. It has been widely suspected that this movie would end up doing something similar with “The Empire Strikes Back”.  There are several points that echo or repeat ideas from that film. They are mostly moments though, rather than plot threads. The parallel between Luke now and Yoda on Dagobah is clear but superficial. The temptation of Rey by Ben is very much in the vein of Luke and Darth Vader in “Empire”. These similarities felt like strengths to me rather than weak imitations. It is as if the pattern of the struggle between the light and dark sides of the Force are destined to repeat themselves.

Of the characters introduced in “The Force Awakens”, the ones who come off the best in this film are the principles in the main plot, Kilo Ren (Ben) and Rey. Adam Driver is being used in this film the way Christian Hayden should have been used in the two prequel films. His emotional arc is more subtle and less random than the earlier character. The behaviors that he was mocked for in the last film are not eliminated here but they are exploited to tell a story and create some motivation on his part. Getting rid of the mask will be one of the things that allows this film to be much more mature in bringing this character to the next film and the climax of his story.

Rey also gets a solid few pieces of character development, and much like Luke in the original trilogy, she is the center of the story without having to carry the whole film and plot on her back. Daisy Ridley can’t have quite the impact she did as a new character in the last episode but she grows and fights and makes choices that all work because she commits as an actor to the character. Her best moments include a series of interactions with Luke, a moment of uncertainty in a cave, and the culmination of her interaction with Ben. Everything else in the film is context for the relationship that is being formed with these two.

OK, now to some of the things that hold this movie back from it’s potential. The other characters introduced in the last episode do not fare as well in these events. Oscar Issac as Poe Dameron, is not the mix of Han and Luke that we want him to be. The character comes off as a weak version of Maverick from “Top Gun”. Head strong and unwilling to listen to those higher in the chain of command, he needs more charm to be able to pull this off. His character is underwritten and feels the most cardboard of the leads in the film. Jon Boyega’s Finn is marginally better, with more to do and a new character to play off. The problem is that the main sequence he is featured in was the weakest part of the film. The casino plot on a new planet, Canto Bright, feels the most like the prequel films. Elaborate set design, background scenes filled with CGI creations to amuse us, and a completely unnecessary chase on new creatures that we are introduced to, simply for the opportunity to have them in the film. The rushed and tacked on inclusion of Maz from the last film also makes this story thread feel like an accessory rather than something endemic to the plot.

There are some treats that come along with the story, which help compensate for some of the excess. The opening battle sequence is excellent as is the fight at the climax of the film. The material where Snoke confronts Rey and Ben is also a welcome surprise and turn of events. As I have already said, the Luke Skywalker payoff was maybe the most satisfying thing about the movie and the reveal and reactions to it were well played by all involved. This is officially the longest film in the Star Wars franchise, and it did not need to be. I was never bored but I was sometimes overwhelmed by having to keep track of so many events taking place simultaneously. 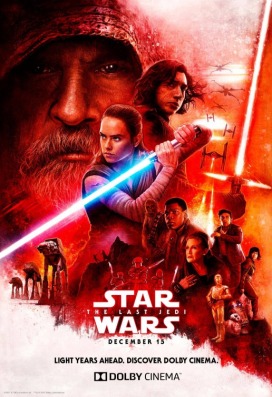 “The Last Jedi” can work as a stand alone feature but it does set up future events for subsequent films. The film looks terrific and there are plenty of action scenes to keep us involved, but only the plot with Luke and Rey and Ben feels like it is relevant to the story that is being told. I wish it had ended on a note that builds anticipation and discussion for the next film, but this movie feels complete. Clearly there are characters that have to be resolved, but It is unlikely to create the kinds of discussions that took place after either “Empire” or “The Force Awakens.”.