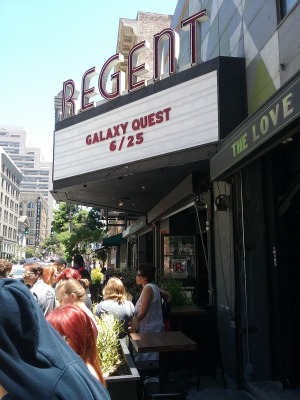 Having made the trip to downtown L.A. last night for a fantastic screening of “Jaws”, we returned to the area today for another screening that was equally marvelous, “Galaxy Quest” at the Regent Theater. This is a much smaller venue, and it lacks the historical value of the movie palace we visited last night. The venue is more of a club now a days but they do show films occasionally so they have a big stack of folding chairs that they can dig out and put in rows with zip ties. I can’t really complain because the folks there treated us well and made sure that we got an accessible seating spot, so the staff is great.

The one time I have written about this movie before was in a post I titled “Three Perfect Movies“. It is the second film on that list and as I said at the time, there is nothing that I think could be changed about it to improve it at all. The screening today was sponsored in part by “Screen Junkies“, a website I am sure most of the readers of this blog have visited. They are putting together a documentary about the legacy of “Galaxy Quest” and there were cameras in line and during the Q and A, to insure there will be contemporary original material to go with their interviews. 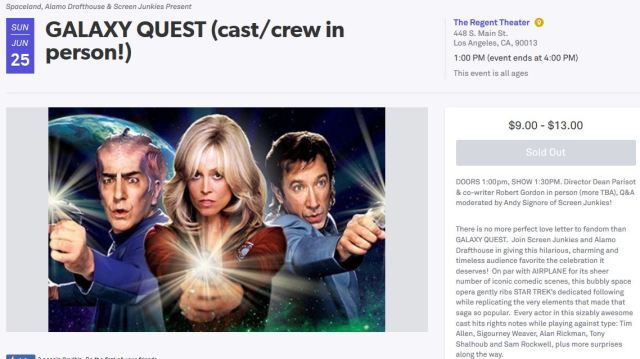 They are working in conjunction with Alamo Drafthouse, who will be opening a theater complex in Downtown L.A. next year, and they provided a rough version of a trailer for the film at the start of today’s presentation. Hopefully that preview will be available soon so that everyone can anticipate the film. The screening today included several guests, but there was also cosplay going on in the line and in the theater.  A young woman right behind us in line had her own Lt. Tawney Madison uniform and she was interviewed by the film crew. Later, a band of Thermians showed up in character and charmed everyone and willingly posed for pictures. That group ended up in the front row and will certainly be a part of the documentary feature as well.

The film, for anyone who has missed it, is a humorous tribute to the cheesiness of the Original Star Trek series and their fans, who would form the basis of the current geek culture. The movie does not treat the characters disrespectfully and it clearly has a warm spot in it’s heart for the actors that are being thinly lampooned.

The screening today looked to be a DCP presentation, and it lacked to switch from one aspect ratio to another that I so distinctly remembered from my original viewing of the film way back in 1999. The sound was great for the audience, but the setting were such that the cast and crew who spoke after the film, had a hard time hearing each other in spite of using microphones.

It is the guest list that makes the presentation today so special. Mark Johnson, the Academy Award winning producer of “Rain Man”, was also the producer for this film and his appearance here suggests how deeply he really cared about the project. Also speaking of a film he seems to truly love was director Dean Parisot. Screenwriter Robert Gordon was included in the proceedings as well and his contributions to the discussion and to the screenplay were great. Two of the actors who starred in the film also were surprise guests, they were Enrico Colantoni who played the Thermian leader Mathesar and Missy Pyle who was the other female star of the film.

Johnson told a story about how the film came together and mentioned that he hired Parisot after having worked with him on a previous film, when the original director (Harold Ramis) left the Galaxy Quest project. Parisot was also described as famously handling notes from the studio by nodding his head and then ultimately not doing anything of the sort. The best example of that was the line that Sigourney Weaver was supposed to deliver upon seeing the crushers she and Jason (Allen’s character) are expected to traverse. She said the original “F*@k” and Parisot did not shoot any coverage or alternate takes of that scene so when it is dubbed, it is clear what she originally said. Gordon spent some time revealing an odd note that came from Dreamworks Exec Steven Spielberg, that he’d had a dream about the villain of the film “Sarris” and a large ball. Everyone was a little unsure how to tell the genius that his idea was wack, and Gordon said he thought it might have been a test, to see if the screenwriter really believed in his own work and would stand up for it. Enrico Colantoni shared a little bit about his time with the film, and he appears to have created the dynamics that represent the Thermians behaviors during the movie. Casting Director Debra Zane was in the audience, and the director asked to to explain how she used Colantoni’s audition tape to prompt the other actors for their roles. Missi Pyle told a couple of stories about everyone who played a Thermian attending “Thermian Academy”, basically a camp project where the actors honed their off kilter vocal delivery and practiced the odd walk and arm movements of the aliens. The best piece of information revealed was that the rock monster, when finally ejected into space, was supposed to have a thought line that read “Tranquility at last”, but someone decided we don’t really need to know the motivation of a rock monster.

Everyone was heartsick about the loss of Alan Rickman last year, and that seems to have put the “Galaxy Quest” limited TV series on hold for the moment. Both Johnson and Parisot seem to hold out hope that it will still happen, and the crowd was very enthusiastic. We also met up with my friend Michael who writes the site “It Rains…You Get Wet”. We last saw each other at the TCM Film Festival, and today he was joined by his daughter who is about to embark on her senior year. So it was a successful afternoon and a joy to see a great movie with fans who love it as well.