It Comes At Night

If you have not seen the trailer above, wait to watch it until after you see the movie. It is filled with visual moments that will take away a little of the mystery of the film. I would not say they were spoilers so much as they are more detail than you want. I can say that when I first saw the trailer I was intrigued by the movie, but I only saw it the one time and I did not recall all of the information that it doled out. That was fortunate for me because the pieces of information that show up bit by bit help add to the suspense of the story. As usual I will try to keep this commentary spoiler free.

To begin with, the title of the film is accurate, but not in the way you expect it to be. There are substantial elements of horror in the story and they are often envisioned as a part of the night time experience of the people involved in these events. There is no prologue or background information, we are introduced to our characters as they are carrying out the inevitable but brutal task of surviving in the world they live in. Something has happened in the world, we never get a clear picture of what it is, but it has brought isolation, infection and paranoia with it. There is a family at the heart of the story and they are struggling to maintain a sense of family identity, surrounded by fear and unpleasantness. Writer/Director Trey Edward Shults has fashioned a claustrophobic Rorschach test for his audience, and there are two excellent performances that get us there.

Joel Edgerton is an actor that I apparently first encountered in the Star Wars prequels. I did not realize it until I looked him up today, but he plays the young version of Luke’s Uncle Owen. He really came to my attention however in 2011 when he was in two high profile pictures within a month of one another. He was one of the two brothers in my favorite film of that year “Warrior“. The second was a film that I really ended up disliking and it came out just a month later, “The Thing [Remake/Reboot/Prequel]”. In the years since he has had an interesting diversity of roles to play. The role he fills in this film is certainly different from what he has done before. He is a man named Paul, who has created a set of rules that he and his family are living under, in order to protect themselves from the horror that is happening around them. His terse delivery of lines and flinty looks suggest that he is a hard man. In truth he is a dedicated family man who has been forced to become hard by circumstances. One of the reasons a film like this works is that the audience members try to identify with characters and they are forced to ask themselves, what would I do? Paul is faced with tough choices on a daily basis and it may be alienating him from his son.

The son, Travis, played by actor Kelvin Harrison Jr., is really to main protagonist of the film. We see the effect the way the family has to live on his psyche. He is an inquisitive and sensitive seventeen year old, who needs to grow but is being asked to do so under difficult circumstances. He loves his father but seems less and less close to him as more tough decisions have to be made and sometimes Dad just chooses rather than discussing it. This is a dystopian film without a macro view of society, but rather a micro perspective. The horror elements involve tension and uncertainty with the consequences being equally unknown. The imagination creates as much of the unpleasantness surrounding the characters as their actual situation does. The question will arise on several points, Is Travis having memories, nightmares or vision of the future? The tag line in the trailer sets it up very well, the real monsters are created by fear. 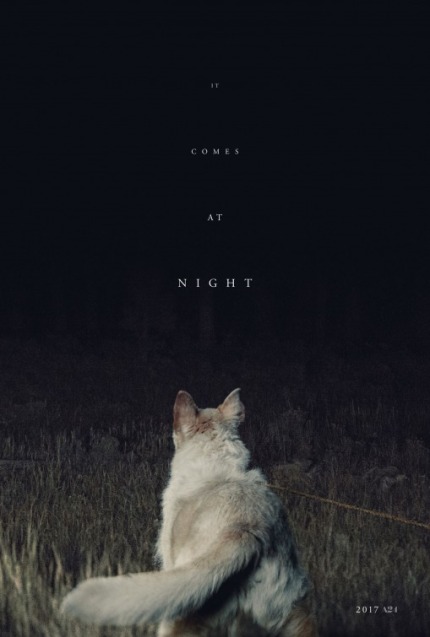 This is not a traditional horror film and if that is what you want and expect you are likely to be disappointed. It is however a truly frightening film which build up tension, creates horrific anticipation on the part of the audience and then asks us to judge our selves. What would we do?  There are a couple of jump scares but it is the paranoia and rationale follow through of the philosophy of survival that Paul has adopted that creates the real terror here. There are moments of tenderness by all of the characters in the story, but they underline the dangers that this necessary route to survival would result in. It will certainly leave you doing more thinking than quaking in your boots, but they will not be the comforting thoughts that arrive at the climax of most horror films.

2 thoughts on “It Comes At Night”