The X-Men franchise has been going pretty strong for the better part of two decades now. Both Hugh Jackman and Patrick Stewart have grown older in their roles as Wolverine and Professor Xavier. I don’t know how they will replace Jackman, but Stewart has been gracefully edged aside for James McAvoy in the last few outings, including a dual casting in “X-Men: Days of Future Past“. The two of them have been cast in this capstone film, which basically cements their exits  from the franchise. This episode is tonally very different from any of the other films, including the last outing for Jackman which was “The Wolverine” back in 2013.

Most of these films have been cartoony super hero stories with a new “big Bad” to fight against in each edition. There is some subtext about ethnicity/sexuality and culture but usually it comes down to some big action sequences that everyone is looking forward to. “Logan” has plenty of action scenes but they are mostly a series of mutants versus mercenaries, and usually involve a car chase or two. No stadiums are lifted into the air, the Statue of Liberty is not at risk, and the wold does not seem to teeter on a single moment. The darker subtext here has to do with genetic manipulation for intentional purposes. Since the film is set ten years in the future, it is safe to make some jokes about GMO crops and GMO humans. The Frankenfood that most alarmists are worried about is mocked, but the human process is the thing that provides some depth to the movie.

Let me share a quote with you from my review of the 2013 film: “ I know the film is PG-13 because we get only one f-bomb, and the blood from all the fighting and evisceration that is taking place, stays mainly on the characters. Body parts don’t come flying off the screen, there are no fountains of blood spraying the walls, and the violence remains mostly in the imagination.” Apparently, director/writer James Mangold felt the same way, or else he read my comments and decided to fix this deficiency. “Logan” is R-rated for blood and language. It’s not a surprise that when freed from some contractual restrictions, Wolverine would find colorful uses for the f-adjective. What is a little more of a shock is the degree to which the claws get set free. The number of times the three prongs end up in the head, throat, or chest of a bad guy rivals John Wick’s kill count. It gets a little wearisome at times. Let’s throw in another character with claws, and the dismemberment, decapitations and general viscera is way up. If you have trouble with violence that looks really violent, then this film may not be for you.

I mentioned that the tone of the movie is different. Both Charles and Logan have medical issues in this movie. In a different X-Men Universe, there would be brilliant blue furry mutants and mystic scientists working to discover solutions for their problems. Instead, we have a pair of overworked caregivers who are struggling to get by while hiding from the world. Some vaguely hinted at disaster has made the X-Men disappear. Getting the pill count and schedule is hard enough, but some characters also need assistance in going to the toilet. That’s not something you will see in the comic books I bet. Another thing that will show how different and dark this world is, no one is spared in the story. Sympathetic characters die and often in gruesome ways. I thought we were being set up at one point for a secondary character to use some skills that are human based, but no. As soon as we hear about those accomplishments and start thinking of how they might be used, the character is dead. The warmth of friendship or humanity is held out only long enough to make us feel something when it is snatched away.

Overall I liked the movie quite a bit, but I have my reservations. The violence is continuous without the self awareness of a movie like John Wick. There is background missing that would make the story a little more interesting, and just as we get some monologing to  explain it, a bit of violence jumps in and cuts it off as if to say “That’s not the story we are telling here.” This is really an elegy for the X-Men characters we have known and a passing of the torch to new mutants. It feels like the studio has set up the whole franchise for a second reboot since they got started. The Deadpool 2 teaser at the start of this film has nothing to do with this movie except for a brief reference to Logan as a joke. The mood of the opening teaser is incredibly different from the movie that follows it. The final tip off for where this is all going to end up is contained in the use of a Johnny Cash song in the trailer and a different Cash song in the end credits. The dire and desperate voice of Johnny Cash is a natural for Mangold to use. He was after all the director of “Walk the Line”. It is also a Cliff Note sized clue that this movie is a tragedy and not an adventure.

Last night I had a disappointing experience. We decided to watch a horror film and we chose “The VVitch” because we’d heard a lot of positive things about it. Maybe it works for other people but I was not happy. In fact I found it quite irritating in the way the story gets resolved, or at least sort of resolved. Today, to wash the bad memory out of my brain, we picked another widely acclaimed horror film. This movie is more contemporary and it has an interesting perspective on the world. I’d seen the trailer and I was afraid it was going to be a polemic on white privilege, instead, the movie twists the idea of cultural appropriation in a way that is totally off the wall and satisfying.

Daniel Kaluuya is a name I did not recognize, but he was in a movie I saw a couple of years ago, “Kick Ass 2”. His part in that movie was not significant, but his role in this movie is impressive. He is the lead and he carries most of the drama and horror of the film on his shoulders. The only thing I know Allison Williams from is the highly criticized Peter Pan Live form a couple of years ago. She was also very good in this film and her character has surprising elements to it that will turn the story at some points. Three other well known old timers are also in the cast. Bradley Whitford from the West Wing and “Cabin in the Woods” plays the neurosurgeon father of Rose, the white girl that is dating Kaluuya’s character Chris. Dad is just enough of a social justice liberal to be disarming, but still he and his wife player by Catherine Keener, are just a little off.  Mom is a psychiatrist who uses hypnotherapy to help clients deal with smoking and other issues. At first they seem just a little odd but as time passes, Chris begins to listen to the doubts that he might be expected to have as a lonely black face in a well off suburban neighborhood. The third character played by an old hand is Jim Hudson, another blind character played by Steven Root. He turns out to be a key element of the reveal when it shows up.

The slow burn creep factor in this movie is exquisitely patient. We know things are off but we have no idea exactly what is going on. Chris gets warnings from his friend Rod, who is concerned about him going into the country with all the white people.  Rose is supportive in the way a girlfriend ought to be, but she is also a bit nonplussed by the potential of her black boyfriend meeting her parents without their knowledge of his background. All of the family friends that show up at the parents house are also a little too awkward and direct about Chris and his ethnic difference. There are a couple of disturbing or frightening scenes that involve the servants at the house, and there is definitely a Stepford Wives feel to the goings on.

The twist comes and it is a dozy. Suddenly things are more frightening than they might have appeared and the story gets clever with the social conventions but maybe a little to direct with the horror elements. Rod gets some great sequences that add some comic moments to the film, and that makes the story feel a lot more believable than it otherwise would have. I can’t give away anything, it’s not my style to do so, but I can say that the story is a lot more satisfying than the psychological supernatural film I saw last night. The wrap up to this film may be more conventional, but at least it feels like it is part of the story that we have been watching. 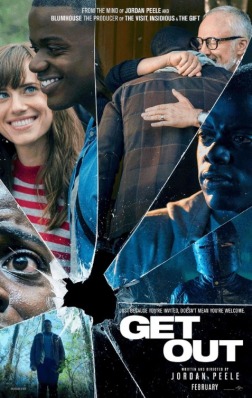 Writer /Director Jordan Peele is a guy I recognize but I have not really paid much attention to. I have seen the routine with the substitute teacher, in fact, I plan on using it in my classes. As an actor, I remember him from the “Fargo” TV series, as one of the FBI guys who screws up massively. This film shows that his talent is not limited to comedy and he clearly understands the check points for a good horror film. This probably does not need any recommendation from me, the movie is doing good business after all, but I will be telling anyone who will listen, this is worth your time. As I said to my daughter at the end of the film, “Now that’s how you make a horror film!”.