Fantastic Beasts and Where to Find Them

When I wrote my review of “Harry Potter and the Deathly Hallows Part 2” five years ago. I  reported on the sadness that came with knowing the story was over and our time in the Wizarding World was at an end. I must have forgotten the times we live in because of course when there is money to be made and a hunger for stories, the film industry will try to find a way to produce more. Earlier this year, a widely acclaimed stage play of a Harry Potter story from post Deathly Hallows made it’s debut in London, and the script for that play became a bestselling book. Also in the woks was this piece of entertainment, a spin off story of the Potter books, featuring only a vague couple of references to characters we would recognize. The opening of the Universal Studios Hollywood version of The Wizarding World of Harry Potter earlier this year, making this a banner year for fans of the franchise. I’ve not seen the play, so I can’t comment on it (although I did read the script and had some reservations). I’ve not yet visited Potter World at Universal, although my daughter has an annual pass and seems to have gone a half dozen times or so, (she is very enthusiastic). I have however seen the new movie and that I can speak about.

“Fantastic Beasts” is mostly a delightful fantasy adventure that captures much of the essence of the magical world. It is also clear that there are many other stories to exploit in this thread and many others from the Magic worlds. The story is a bit convoluted but works out correctly in the long run. The biggest strengths of the film are some new characters, the production design and the title beasts themselves. The additional films that are planned may run a bit thin at times because there is not the rich backdrop of a single location or the evolution of characters over seven years,but as fantasy films they should be a treat. There are seeds of the Dumbeldore-Grindelwald story are here, as is a plot line that will lead to more exploration of the social taboos of “No-Maj” (Muggle) relations.

The lead character in the film is Newt Scamander, played by Eddie Redmayne. His look is perfect and the actions he plays out seem to fit the story nicely, but I do have to say he was the weak link for me of the main characters. Jeff Bridges is regularly criticized these days for the tendency he has to mumble his lines in that Texas grumble. Well Redmayne does a whole lot of mumbling as well, but he is supposed to be so reserved and shy that when he mumbles, not only can you not make out the words, you may not be able to tell he is speaking. There may be confusion over some key elements of the story because he has a lot of exposition in his character’s dialogue. Fortunately, the character is accompanied by a great trio of supporting characters that have the light touch and personality that his aw shucks boyishness sometimes misses. Dan Fogler, an actor I know from “Fanboys” and “Balls of Fury”, is impressively effective as the “No-maj” Jacob Kowalski, a bystander who gets sucked into Scamander’s adventure. He is a great audience surrogate and has a charm that belies his somewhat schlub like appearance. Unconventional casting results in a humorous side kick and a surprisingly believable romantic figure.  The magical sisters Tina and Queenie Goldstein are also great additions to the story. Katherine Waterson as Tina and Alison Sudol as Queenie are lovely women cast as ethereal beauties with much more than their looks to get them through this adventure.

I think everyone will enjoy the creatures that Newt carries around in his briefcase. An item that has magical dimensions to it much like the tents used by the Weasleys in their trip to the Quidditch World Championships. Some of the beasts are charming and will amuse the audience immensely, others are more difficult and present a threat at times but also a promise. All of the story takes place in a vividly realized 1920s New York setting. The decor and clothing styles are all right up my alley. It is a world vividly realized by the talented craftsmen behind the scenes and in the computers used to make this film. Colin Farrell’s suits are enough to make you want to be living in that period and wealthy enough to dress as the magic folk do. There are the usual magical battles and dramatic chaos that accompanies it. There are however several quieter scenes that make the story richer. I especially appreciated the apartment scenes where Newt and Jacob are taken in by the Goldsteins. The mixture of the mundane and the magical is great in that sequence. The more extended trip into Newt’s collection of animals is another standout moment from the film. 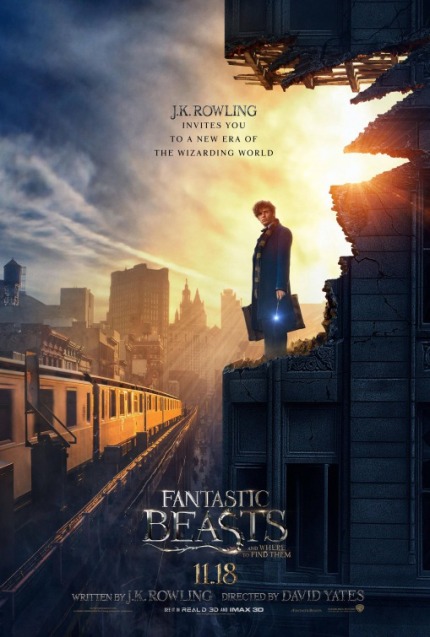 The idea of exploring the Magic world in another location on the planet is a solid start in making this series of films feel fresh. The Magical Congress of the U.S, as counter-part to the British Ministry of Magic is clever with some very American style twists.  I do think there is a great opportunity for these films to grow in stature and depth as we get deeper into the mythology and history of the characters and places in the stories. “Fantastic Beasts and Where to Find Them” should be a successful start to a new line of stories, only distantly connected to Harry Potter, but hopefully as rewarding when we get to the conclusion.