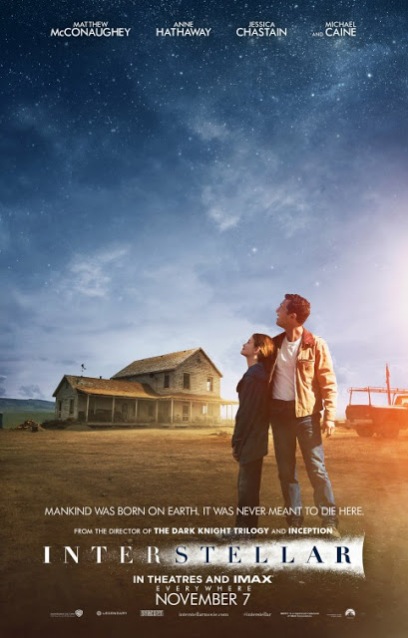 This was an interesting weekend for films at our house this weekend. My daughter is in the middle of her first watch Halloween Horror  month, and I have a few blind spots there to fill in. This weekend however provided multiple opportunities at the movie theater for catching up on some quality films that have been out of theaters for years. “Taxi Driver” is having a 40th anniversary screening at AMC,  and the whole Harry Potter Series was screening this weekend as well. There was however one film that I have visited only once before and it was showing as part of an IMAX Space film salute also at the AMC Theaters. My daughter had never seen it before, and since Interstellar was number two on my list of films from 2014, it seemed the right choice to make.

The opening act is long and it often feels oppressive. It takes a long time for this voyage to start but the premise is set up very well and the relationship between Father and Daughter is the key to the emotional payoffs we get at the end of the film, so it is important to get it right. I wanted to scream again at the approach the education system was taking to the Earth bound crisis. The Moon Landing is substituted for SDI in the theory about how we crushed the Soviets and then a big helping of conspiracy paranoia lifted from “Capricorn One” is laid on top. Fortunately, the terrestrial politics is larger in the background and instead we get a thoughtful speculative story about travel that is not yet technically possible.

I have already linked my earlier review for you above, so I’m not going to recap all of the things I thought were worthwhile in this film, you can read them there. I do want to add that the sound design is very impressive and I really enjoyed listening to the movie and the score in the dynamic stereo system that the IMAX [Fauxmax} theaters provide. I also wanted to express my admiration for the creative and simple design of the two robot travelers that accompany our hero astronauts. TARS and CASE look futuristic without resorting to art deco elaborations. Their role in the film is not as significant as that of HAL in “2001” but they provide humor and companionship along the way.

There are still some things about the interactive gravitational model in the climatic scene that confuse and bother me. The interjection of future human travelers into the process requires an understanding of physics and relativirty that will give even the very smart people out there a headache. I’m willing to grant all sorts of time travel conundrums so I can focus on the story in a number of films, it just feels like a bit of a cheat in a movie that has taken these concepts so seriously up to that point. The payoff however with the Father Daughter dynamic was worth it all. It provides a great emotional high point and does Cooper’s final mission and the imagined future for him.

I saw that this same film was playing on my satellite programming this morning, and after watching for a few minutes, I once more can tell you that if you love movies. The best place to see them is in a theater with other film fans who share the experience with you.  I may have paid more for the two tickets than I would have for a Blu-ray copy, but the value of the experience to me was worth it.