I’m not a comics guy as I’m sure I’ve said a couple of times before. My guess is that the number of people like me, those who will see a comic based movie without knowing the whole cannon, outnumber the people who can tell you that the eye-shadow on the Joker is inconsistent with the history established in volume 274 of the Dark Knight Series 3 featuring the four fingered Joker variation (or some such detail).  In other words, I’m not so invested in the characters that I can’t handle change. There was a lot of talk when this film was being produced about whether it could meet the fans expectations. Other than Harley Quinn and the Joker, I’ve never heard of any of these characters, so maybe my opinion will be discounted by some because I am not invested. As the summer season came on, the buzz was that “Suicide Squad” would be the film to make the comic book fans happy. When the first reviews started coming in, there was a stampede of disappointment and negative word of mouth started to set in. From many of the critics, you would think this film was a bomb. The box office so far has to be comforting to the film makers in spite of the poor notices. But, from the view of this outsider, the film is largely successful in what it is attempting, and suffers from the same problem that all big action films do, a weak antagonist makes a weaker story.

We are fortunate that we do not have to wade through a series of stand alone films to be set up in this universe. The first half hour or so of the movie, inventories the characters, highlights their quirks, and establishes personality for them very effectively. These small vignettes are probably the most effective sequences in the movie. I will say that it was a bit of a give away that one member of the team is introduced when they are put together and there was no B Roll on their character in the first section. So guess which character will be sacrificed to show that the secret government agency in charge means business. There has also been talk that Jared Leto’s Joker has been significantly excised from the film, that seems to be a lot of hot air. The Joker Character figures in one of the background stories, participates in a parallel story, and is part of the coda of the film. It is true he is not on the team, but that does not mean that his presence is insignificant.  Margot Robbie’s Harley Quinn will certainly be the breakout character in the film and she can expect to explode in the business over the next few years. Miss Robbie is extremely watchable and carries off her part here with great panache.

Let’s discuss a couple of weaknesses of the film. It turns out that the Big Bad the group has to face is created by the attempt to create the group in the first place. All of the characters are given such menacing  back stories that the quickness with which the authorities try to establish a working team seems unrealistic ( as if anything in this didn’t already). There are a couple of actions that have to be done by the team that seem unnecessary, including the rescue of an unidentified figure at ground zero of the main fracas. It also makes no sense that the plan of action being followed involves a simple explosive device, when the secondary antagonist seems to be impervious to other weapons. Also, the idea that it could take out a member of the team also seems inconsistent with what has been established earlier. In other films, the duo of Jai Courtney and Joel Kinnaman would threaten to but me to sleep. Both of these guys have been charisma free in other films, but this time around they get a chance to shine a little and Courtney especially makes a favorable impression.

The main villain seems a bit of a stretch, but in the D.C. Universe they are working at creating, maybe it is plausible. The representation however is so horror film fetish bound that it looks ridiculous. At the climax of the film, the bad guy is basically doing the most stupid voodoo dancing and arm waving this side of the 1976 remake of King Kong.  The problem that happens when you give a character powers to make them a worthy opponent is that you also have to find a flaw that gives the heroes (sic) a chance. Things did not come together well in this regard and the confrontation feels like a giant CGI smackdown without much credibility. 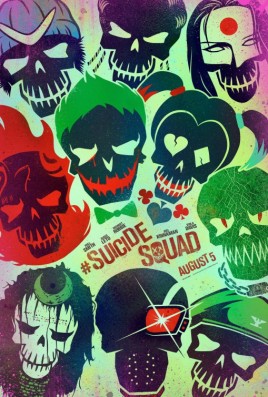 The soundtrack is packed with music from the last fifty years so there will be plenty that audiences can relate to, although sometimes the choices seem a little hokey. The color palate of the film is neon without becoming overly cliched and tiresome. There is also a lot more humor in this film than the two films that preceded it in the MCU queue. There are some very clear tie ins to this years Batman v. Superman and Bruce Wayne has a couple of scenes that tie it together even more. Viola Davis is a stone cold hard ass as Amanda Waller, the covert intelligence officer responsible for the team.  There is a point where Will Smith’s Deadshot asks facetiously, “and we’re supposed to be the bad guys?”, it is Waller’s character that he is referring to. So I’m down with the characters and the performances for the most part. I also think the movie looks very solid. Where they lost me was in creating an obstacle for the team to overcome. It feels a bit too overheated. It may not be the widespread opinion, but I think this film is fine and it accomplishes what is needed, a set of premises for the film and an outrageous team being put together in a reasonable manner. Now all Ben Afflect has to do as Batman, is repeat the process, only recruit the Justice League members with a bit more elegance. Ignore the bad word, it’s a solid film with some flaws but also a lot going for it.