I’ve saved my favorite events for the end of the Festival post. This was a tough choice because so many special moments were had by me at this years festival. The Vitaphone Presentation was incredibly enlightening and educational. It certainly gets me in the mood to learn more about the process and to seek out the films of that early sound era. Francis Coppola was  a personal high point because he was the first director I knew by name as a kid and seeing him in person was just a great emotional moment. “Fat City” was the best rediscovery of the Festival, Stacy Keach was magnificent in the film. “Shanghai Express” was a wonder to behold, the technical sophistication of the film in 1932 is a wonder. Ultimately, my geek side won out because there is just something about a couple of tech guys, talking about their own fascination with the process that acts like a magnet for me.

Special Effects wizard Craig Barron and Sound magician Ben Burtt, are the Dynamic Duo that always seem to impress. My first visit to the Festival was two years ago when I crashed a screening of my favorite movie that was being discussed extensively by these two.  Their avuncular personalities and attention to detail really impressed me and last year they repeated the accomplishment with an excellent presentation on another early classic. So I had high expectations this year as well.

Everyone has seen “It’s A Wonderful Life”  enough times I’m sure to be dehydrated from the experience. I think this was my first time seeing it on the big screen however. My companions included my daughter Amanda and my friend Michael, who blogs at “It Rains…You Get Wet“. We saw several films at the festival in his company, but I suspect this one might be his favorite. He has thought very carefully and thoroughly about it as is evidenced by his “Favorite Scenes” post from just a week ago.  In addition to the waterworks we all experienced, our special effects guys did a very nice job showing how some of the visual and sound elements of the film were achieved. There was a very nice power point presentation which visualized the bridge that Clarence and George both jump off of. The imaginary river and the pretty perfect process shot that goes with it were a complete surprise to me. I’d never have guessed that this was a shot that involved a large amount of camera trickery.

The composites that go into this shot were really pretty amazing, but it is put together so seamlessly that you would think they filmed on a actual bridge. We also got to see some miniatures that were used for the Baily house in the opening and the matte shots that help make up the second story of the old Granville house

There was an extensive discussion of some of the sound elements in the film as well. The crowd noises and wind sounds and the tinny piano that young Janie Baily plays as George is having his breakdown were not accomplished without some effort. As an extra treat there were a few deleted shots of Mr. Potter’s mansion thrown into the mix, just so we can say the Academy archives had been fully plunged. 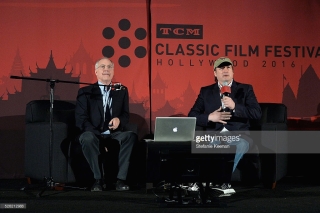 The second film they presented was even more fascinating and right up the special effects alley that these guys own. The  George Pal production of “War of the Worlds” is a spectacular looking movie with enough effects shots to keep an audience involved for hours. The extensive footage shown which described a brief twenty second shot of one of the Mars War Machines attacking a part of the city before it crashes was compelling as all heck. They pointed out a very amazing shot in which the model actually caught fire from one of the squibs that was used to simulated explosions as the attack takes place.

The combination of shots that was required to produce the effect of the war machines shields was just great. It’s always incredible to me how the early film guys figured out all the things that had to be done to get a great shot. This movie is more than sixty years old but the sophistication of the techniques is impressive without any computer work at all.

This reproduction of one of the war machines was on display in the Club TCM area of the Roosevelt Hotel. The puppetry, electronics and mechanical engineering required to make it all come together was fascinating to see. As I sat with a capacity crowd in the theater, I felt like I was being delivered my own “live” version of a DVD Special Feature. 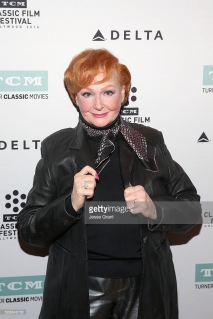 There was also a demonstration of the manner in which some of the sounds of the attacking machines made was achieved.  A student group from a local technical college had brought in a high tension wire, stretched from floor to ceiling and you could hear the dynamic and other worldly sound that it made.

A bonus to the screening was the presence of co-star Ann Robinson, who after being introduced in the audience, stood up and answered a few questions and shared a few memories of making the film. There was an interesting publicity shot of a make up and costume look that had next to nothing to do with the picture. Ms. Robinson told us that it was just some publicity material that was tried out at the studio and never really used.It was an unplanned little extra that sometimes happens at events like this. Barron and Burtt were pleased to be able to add a little to their presentation with her input.

The new fan zone planned by TCM promises some backstage material from the TCM archives. I suspect that these interviews, demonstrations and slide presentations will be among the featured items at the site. I hope I’m right on that, and when I spend my money on it and support the channel, I will be able to revisit some of these great Movie Conversations. Be Burtt and Craig Barron are on the top of my list of things I hope to find on “The Backlot“.