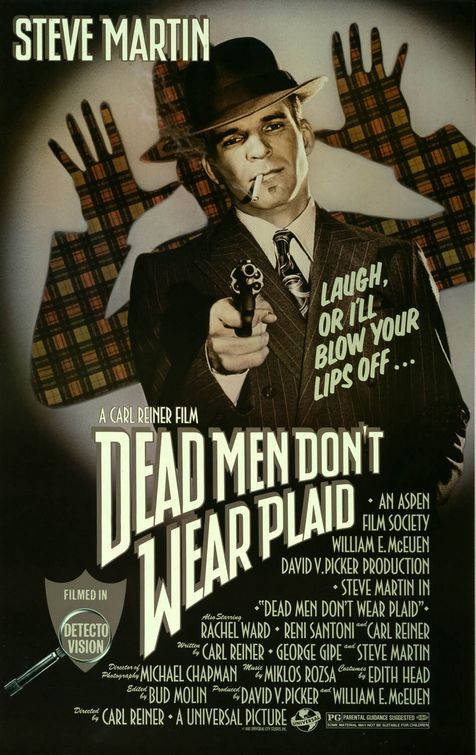 Steve Martin and Carl Reiner collaborated several times in the late 70s and 80s. Some of their films are silly and some are brilliantly realized concepts. Dead Men Don’t Wear Plaid is both. It is an homage to the film noir of the 40s and 50s, with a Saturday Night Live sensibility. They took clips from more than a dozen classic films and mixed them with new material that was specially created for the movie. Martin rocketed to fame as a stand up comedian, and Reiner honed his comedy chops on improve and 50s variety shows. They seem to have been perfectly combined for this movie.

I saw this movie when it opened in May of 1982. I still have the promo button they passed out at preview screenings proclaiming that opening day was National Plaid Day. It remains very funny but the technology for merging older film stock with contemporary materials is much greater today than thirty four years ago. It still looks great but we are spoiled today by the digital wonders that come from progress. My guess is that Zelig and Forrest Gump would also suffer a little by comparison as each uses a similar technique to this film to tell it’s story.

Rachel Ward was the “It” girl of the early 80s after starring in “The Thornbirds” on TV. She is the damsel in distress rather than a femme fatale here, which she would be two years later in the neo noir “Against All Odds”.  Steve Martin gets to man handle her a couple of times for big laughs in the movie and she was indeed a beautiful woman, although she has no comic touch at all. Reiner himself appears as the butler, and maybe a little bit more, and he hams it up with Martin very effectively. Most of the costars are actually big names from past films who appear for a few brief seconds but are integrated so well into the movie that I hope their families are getting residuals.

Mr. Reiner was honored after the film with a short assemblage of film clips put together by TCM and a nice introduction by actress/author Illeanna Douglas. She proceeded to try to interview him but Reiner was “On” and would not be contained. The 94 year old actor/writer/director/producer was full of jokes, side track stories and assorted foolishness. He was very entertaining but I was occasionally left wondering if he sometimes just lost track of what he was doing and went to a comfort zone.  The big house at the Chinese Theater was packed and the nearly 1000 of us lucky enough to get in gave him a standing ovation greeting that was very sincere.

He talked about his days with the Dick Van Dyke show and was clearly quite proud of his accomplished children, including his director son Rob, his psychologist daughter and artist younger son. He shared George Burns ribald comment with the audience as to what sex was like in your 80s, after all they did work together on “Oh God”, but he had to make sure there were no children in the audience. The analogy was disgusting and funny as heck.  He appears to be in good health and still very amusing with his improvisational comments during the interview.  It was an afternoon well spent and reminds me that I should be visiting my DVD collection more often, where “The Man with Two Brains” and “All of Me” reconnect him with Steve Martin. There are several other films to post about from Friday and Saturday, but I will have to catch up during the week, it’s just too late when we are getting back to do any coherent writing.