It’s been an amazing ten years that AMC Theaters have put on the Best picture Showcase. In 2007, there were only five films nominated, continuing a long tradition since the 1940s of only including five films in the top category. In 2009 there was a change in the nomination process and up to 10 films would be honored as Best Picture Nominees. That’s when the Showcase evolved into a two day affair spread over two weekends. Since then we have had two years of ten nominations, two years of nine nominations and two years of eight nominations. While it is nice when extra films are included, the four a day weekends are a little easier to get through than the two five a day weekends they had when the rules first changed. Someday though, I hope to tackle the 24 hour marathon when they have eight to ten films play back to back in a single 24 hour period. 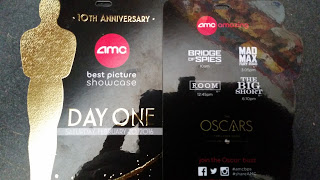 So this year, for some reason, I’ve not seen as many of the nominees as usual. That means I don’t have a lot of reviews to link back to. I will try yo make my comments extensive enough to give you a sense of the film, without necessarily giving you a full review. 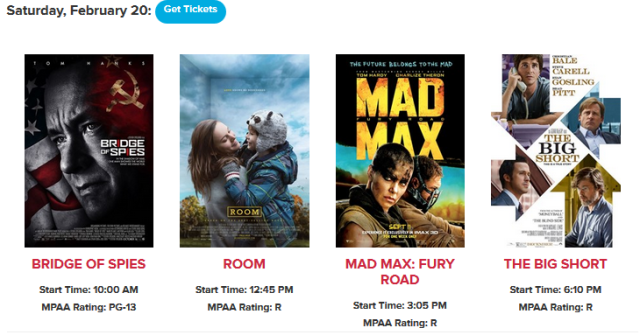 How it is that I missed a Steven Spielberg film, starring Tom Hanks and featuring Cold War spy intrigue is a mystery to me. I think that Mr. Spielberg has reached the point where everyone seems to take for granted that his films are going to be good. A bit like Meryl Streep, his movies get nominated a lot but don’t usually end up taking the prose. This is his third nominated film in the last five years, he has had eleven Best Picture Nominations in his career, but only one has taken home the top prize. It gets to the point where we just expect great work from him and then don’t need to confirm it with an award. As an artist with a high degree of consistency, Spielberg is hard to match and he has another excellent film with this movie.

The production design of this film is meticulous. The late fifties and early sixties are evoked in the subway rides and the vistas they reveal. Sometimes we are moving through an elevated train in Brooklyn, and other times crossing the border between East and West Berlin. The data that was being gathered by the Soviet agent is never described or explained, only the context of his arrest and the times. Tom Hanks Manhattan attorney works in the sort of firm you imagine would be found at the time, with big oak desks and solid doors with engraved nameplates to indicate the partner who’s office we are in. The bleak apartments and prisons of the Communist dominated sections of Germany are contrasted with lush Western hotels and meeting rooms. Only the Soviet courtroom where Francis Gary Powers is convicted, has the grandeur of the western locations.

Working without John Williams for the first time in forever, the music of Thomas Newman is dramatic without having a signature touch. Hanks is as usual excellent, but the stand out in a not quite wordless but certainly an economized set of lines is British Theater star Mark Rylance, playing a Soviet agent who remains unperturbed by his predicament. The impenetrable web of lies that the east Germans, Soviets and Americans  share with one another, has to be translated by the boy scout of an attorney played by Hanks, and there are national security issues in every step. It plays out effectively with the usual Spielberg professionalism and eye for details. The parallel images of boys jumping over neighbors back fences in New York and families being machine gunned as they try to cross the new wall in Berlin, is just one mark of that eye that Spielberg has for connecting the visual with the emotional.

I’m not sure I have recovered from seeing this movie yet. A dark story that will horrify and inspire simultaneously, “Room” may be the best acted film nominated this year. Young Brie Larson is almost certainly going to be the winner of the Best Actress award. Her portrayal of a wounded lioness trying to raise her cub while at the same time learning to live with the damage done to her was remarkable. She works with a child actor equally gifted at this stage, Jacob Tremblay. The two of them are the focus of the film almost entirely, even in scenes with other actors, including accomplished veterans, they form the kind of symbiotic performance that makes your heart melt in one moment and freeze in the next.

The story is told effectively in the first half, with limited camera movement in a claustrophobic space that induces hopelessness. Even after the two emerge from the location of the first five years of young Jack’s life, they seem to still be trapped in that space. It is surprising that Jack, who has known nothing but “room” his whole life is the one who exits the cocoon with the least amount of difficulty. His mother Joy seems at first to be ready to be back in the world but the trauma of her experience is more likely to haunt her for a much longer time than her tough little kid. The scene where her parents and step father sit and confront the elephant in the room will show you how everyone was traumatized by the experience and also give you hope that Joy can recover. Her philosophy toward her son and his existence is humane and righteous, and the fact that her father can’t really deal with it crushes her despite her new won status.

The story is never exploitative, which says a lot for the screenplay and the director. It could have been a horror film or a melodrama, instead it is an opportunity to consider the reality that all sorts of crime perpetrate on our psyches. You may recoil at the suggestion of the media that Joy may have missed an opportunity at one point to spare her child, unfortunately you will also recognize the brutal nature of the news to find any point of controversy to exploit for interest sake. She is a young woman who survived a horrible tragedy, finds a way to rescue herself and her child and then gets second guessed by someone who can’t see that her life is still coming apart in spite of the fact that she is restored to her family. Anyone who doesn’t love animals may not get it, but the healing power of both real and imaginary dogs will cover you with a final warm message.

My third favorite film of the last year, Mad Max Fury Road is the kind of movie that I loved as a kid and would never expect to be nominated for Best Picture. Action films are often seen as mere entertainment and despite the fact that they have been put together in polished and inventive ways, they are mostly neglected at awards season. This is the fourth film in a series that has not been active for thirty years. As a reboot it expands the vision of the director and takes the real. in camera effects that make us movie fans, and puts them on the screen like they did in the days of Ben Hur.

There is also much more of story here than you may at first believe. While the whole movie is a chase film, it is also a film that empowers it’s female characters and pushes back against the brutish domination of women that is often seen in action films. Charlize Theron and Nicholas Hoult are the real lead characters They play wounded souls who are aided reluctantly by the titular hero.

I am clearly not as smart as I’d wish to be. Even with Margot Robbie in a bathtub and Anthony Bourdain making metaphors in the kitchen. a lot of the financial hocus pocus this film was trying to show us was invisible to me. I have a vague understanding of the concepts but an unclear vision of how it was carried out. In an interesting way, none of the groups pictured in this story are the bad guys. They saw what was coming and did make a killing on it, but they simply screwed the real bad guys, whop were the incompetent and indifferent Wall Street types everyone worries about.

Written and directed as if it were a thriller. “The Big Short introduces us to a variety of characters that deserve admiration for their acumen and criticism for their scruples. It was put together from a non-fiction work that tried to explain how the economic meltdown of 2008 came about. According to the screenplay, avarice and stupidity combined with circumstances to bring about a situation where the housing market collapsed on itself. A combination of economic gurus, hedge fund analysts and up and comers anticipated the collapse and created a way to short the market that greedy banks and investment houses were all too willing to try to take advantage of.

The hit and run nature of the story does not give us much chance to care about the characters. We learn that Steve Carrell’s character has a tragedy, that Christian Bale’s character is a genius with no ability to connect to people, and that the character of Ryan Gosling is a weasel who simply cares about getting richer. Most of the action consists of people talking and screaming. Sometimes they are doing so in a humorous way, and every time they prove how stupid someone from an investment company. a government agency or a newspaper is, we get more depressed. After seeing “The Wolf of Wall Street” a couple of years ago, the director and screenwriter Adam McKay seems to have followed the director’s crib sheet and he tells the story through narration, comic freezes, and outrageous moments of human foibles. It’s a good film but I was not as impressed with it as I thought I might be. At least we skipped most of the drug use and sex parties of the Scorsese film.

Next week, the other four films, two of which I have seen and look forward to seeing again.