The blogathon that we are participating in here, is designed to focus on films in which a courtroom battle is featured and argument is the main source of drama. I know a little bit about films, a little bit about argument and a little bit about “Inherit the Wind”. I hope that such a background will reassure you that I am not troubling my own house for no purpose. My purpose is to bring attention to a fifty-five year old film that is based on an ninety year old case that will prove that in nearly a hundred years, we as a culture are still capable of being riled up by events that we see as earth shattering, but in the long run are only a small part of human progress.

If you are unfamiliar with the film, let’s start with the fact that it is largely based on real events. The “Scopes Monkey Trial” may be only a hazy memory to you from your American History class, but it was nationally famous in it’s time. If the Supreme Court ruling in Obergefell v. Hodges, has dominated the news in recent weeks, imagine a similar kind of focus on a local trial in 1925. In reaction to religious anxiety about Darwin’s theories on evolution, in Tennessee, the Butler Act had made it a crime to teach evolution in state funded schools. Nearly a hundred years later, we have the same kind of preclusion against teaching anything that might challenge evolution. Intelligent Design as a theory is heavily criticized by academics and scientists, with similar criticisms as those of evolution from the 1920s. So in essence, the same battle is taking place with the presumptions reversed. The tide of history repeats itself. 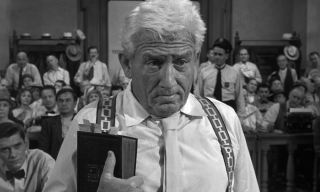 One of the reasons that the Scopes trial drew so much attention was the confrontation between two towering figures of the early twentieth century. Clarence Darrow was a renown labor attorney who migrated to criminal and civil cases and in a hundred cases where the death penalty was at stake had lost only once. The year before he was involved in the Scopes Trial, he had defended Leopold and Loeb in one of the early “trials of the century”. The two were University students who had committed a “thrill” killing of a fourteen year old boy. Two other movies have been based on that case, “Compulsion” features Orson Wells playing essentially Clarence Darrow. Alfred Hitchcock’s “Rope”, has no trial in it so it does not fit the criteria for this blogathon, but you should see it anyway. In the current film, two time Academy Award winner Spencer Tracy plays Henry Drummond, the character based on Darrow.

His opponent in the actual case was three time Democratic Nominee for President and former Secretary of State William Jennings Bryan.  Imagine if Hillary Clinton or John Kerry came forward to prosecute a local case and oppose a political philosophy they abhorred. Bryan was a populist who was known as the Great Commoner and he was also a famous orator, which meant so much more in the days before mass media. He was a strong opponent of Darwinism and took his religious faith so seriously that he considered it an obligation to participate in the trial. He had spoken on the Chautauqua circuit for years, arguing that the theory of evolution was a threat to the foundations of morality and an evil force in the world. In the film, he is portrayed by two time Academy Award winning actor Fredrick March as Matthew Harrison Brady.

The events surrounding the trial in the film, based on the play by Jerome Lawrence and Robert E. Lee (no not that one) are somewhat exaggerated, and an elaborate background of the town minister, his daughter and the high school teacher who was being prosecuted, was all invented for the film.  The circus like atmosphere of the trial however was real. More than two hundred reporters covered the trial. It was big international news. A radio broadcast of the trial did appear on WGN and there were trained chimps performing on the lawn of the courthouse. The trial  in Scopes was a stunt designed to challenge the law, and substitute teacher John Scopes purposefully incriminated himself to make a prosecution more likely. In the film, Bertram Cates, the teacher on trial is presented in a much more noble light, as a beacon of knowledge to high school students everywhere. Future “Bewitched” star Dick York plays Cates with sincerity more than anyone else in the film.

The play, film and coverage of the original trial by journalist  H.L. Mencken are all heavily slanted against the prosecution case and against Bryan/Brady. In a battle over ideas, the story here is that the media influenced public opinion more than the arguments did.Henry Drumond (Tracy) understands the importance of the media but despises some of it’s practitioners, including the character modeled on Menken,a straight dramatic role from Gene Kelly as E.K. Hornbeck.His job in the story is to ground out any nuance in the arguments of the case and help sensationalize them for the world. His cynicism at everyone else in the story actually results in him being one of the sadder characters in the story. Here is a good example of dialogue that reflects the snide attitude he has toward the locals, but it also extends to everyone else as well:

Townswoman: You’re the stranger, ain’tcha? Are you looking for a nice, clean place to stay?

E. K. Hornbeck: Madam, I had a nice clean place to stay… and I left it, to come here.

Drummond’s approach to the case is to undermine the law under which Cates is being prosecuted. The problem is the judge will not allow any of the expert testimony in defense of evolution to be heard. Henry Morgan as the judge appears to be a strict constructionist who believes it is the legislature that should make the laws, not the courts. He takes the very valid position that the law is not on trial but the accused is. Social Justice warriors will find this belief old fashioned but it happens to be the correct legal interpretation. Ultimately, the importance of a single accused man is not what attracted all the attention. The supposed conflict between religion and science is the draw. Until a key moment in the trial, the prosecution had the upper hand and all the best lines and public support. The film though does go out of the way sometimes to make Brady a figure of ridicule. There is a scene where he is speaking with a bib around his neck and he appears to be picnicking at the trial, burping and wiping his greasy fingers from fried chicken on his clothes. Matthew Harrison Brady is portrayed as being out of touch and a figure from the past. His eloquence is right for a tent show revival or Chautauqua stage, but bellowing on the radio isn’t going to work. He has sincere religious beliefs that are referenced during the trial and that is the mistake that he makes as a prosecutor. Drummond baits him into basing arguments from the bible and then calls on him as an expert witness on the book. In the real world this sort of thing is not likely to happen right? The prosecutor being a witness cross examined by the defense,that’s ridiculous. It’s also just what happened in this case. The real Clarence Darrow cross examined the real William Jennings Bryan for two hours on the seventh day of the Scopes Trial.

This is the key dramatic point for the film. The confrontation of the two political giants and the two acting giants, in a courtroom confrontation. Fireworks do ensue but inevitably the imbalance of the views comes crashing down on the scene. Drummond trips up Brady with inconsistencies in the stories of the bible. He uses the average persons presumption against paradox as a fulcrum to wedge the audience and the jurors away from their inclination to side with the Biblical text. He twists Brady’s word to make it seem as if Brady is holding himself out as God’s spokesmen on Earth, a self concept that would be at odds with any average man’s view of another in most situations. The legal argument is largely abandoned in favor of a generic attack on fundamentalist beliefs, some of which are backed by evidence but many of which are unsupported ad hominem attacks directed at the prosecutor rather than the case. As Brady sputters to reconcile contradictions, Drummond mocks him mercilessly in front of the jury. It makes for a great dramatic sequence but a lousy piece of legal argument. In the Scopes trial, all of that interchange was stricken from the record and the jury was admonished to ignore it. In the drama of the film, one character figuratively performs a  coup de grâce on his opponent.

The freedom to offer controversial points of view in a classroom is sacrosanct from the view of those with tenure. The sciences and math being two fields where not much controversy is supposed to exist, but there is plenty of controversy in science. That is part of the scientific method, to continuously test the theories and beliefs that are “settled”.  For a parallel to the evolutionary debate of nearly a hundred years ago, look at the climate issues discussed now. Imagine a “non-believer” challenging the settled science of climate change in a classroom today. They are very likely to be chastised and hounded (“denier”) because they don’t accept orthodoxy. One thing that has not evolved, is the human desire to control other people’s  thoughts. The difference today is that the shoe is on the other foot.

Modern audiences might find the style and performances of the actors in this film to be stilted or hammy. March’s character is supposed to be that way because he comes from an old school of declamation that cherished bombast and speeches as sermons. Yet even Tracy’s Drummond has moments of corn built into it and that will strike today’s audiences as mannered. The humanist approach taken by Drummond is a fair one. He acknowledges that change comes at a cost. Look in the following passage:

“Progress has never been a bargain. You have to pay for it.

Sometimes I think there’s a man who sits behind a counter and says, “All right, you can have a telephone but you lose privacy and the charm of distance.

Madam, you may vote but at a price. You lose the right to retreat behind the powder puff or your petticoat.

Mister, you may conquer the air but the birds will lose their wonder and the clouds will smell of gasoline.

When I read arguments on line about films, especially older films, that get criticized for their effects, style, pacing or racism,  I am reminded that progress costs us. Technology may allow us to see things that could not be visualized before CGI, but what happens to our sense of gravity or physics? Editing and digital video may make a story move quicker, but we lose character and suspense. An evolved mind should dismiss the thinking of the past, but you will lose the ability to enjoy the wonder of the past from their perspective.

“Inherit the Wind” reminds us that 1928 was a different time, that 1961 was equally different as well. The argument continues, what is progress and what is worth keeping? Film makers and society continue to try to answer that question, and to honest, the answers are not always satisfactory.