I suppose it is faint praise to say “I didn’t hate it”, but that was my first impression of the new version of “The Terminator“. I was highly dubious when confronted by the most recent trailer (not the one above) which gives away more plot elements than most of today’s narrative revealing advertisements do. This is an attempt to make “Terminator” a continuing project without the messiness of having to deal with the narratives from previous versions of the story told in other sequels. The creators here have the right fulcrum for moving us to that point, but they use it so often, it is nearly impossible to keep track of all the variations.

On a technical level, the movie looks good. The special effects are up to snuff and there are several spots where practical effects seem to be used instead of the now dominant paintbrush of CGI. Believe me, there is plenty of CGI also, but the frequent car chases, crashes, and combat scenes are much more realistic than you would find in most computer generated effects. The opening sequences which are set in the future and feature Reese and John Connor are actually a well told story of that relationship and the events leading up to the original insertion of a Terminator into 1984. The mix of elements from the original into this current version was effective, and although Bill Paxton’s punk character is recast, you would almost believe that the sequence was lifted whole cloth from the first movie. Almost immediately though the plot twists start and it is apparent that a complete revision is being undertaken.

Time travel stories are always interesting, at least they are to me, but they can be confounding. It would be helpful to have Doc Brown in the basement with a chalkboard, diagramming all the possible contingencies so that we can keep track of what is going on. Everyone who loves cinema wants a movie that is thought provoking as well as entertaining. The problem with this movie is that the thoughts provoked have nothing to do with morality, politics, society or history. Your brain will start thinking about the mechanisms of the story rather than the implications of the characters choices. Instead of pondering what choice would be the most ethical to make, or whether we as a society are surrendering too much power to the technology we use, you are left wondering “how did this timeline get started, or what happens to the future if John Conner kills his own parents, or how do we get John Conner when his parents don’t seem to be getting together?” You end up thinking about the machine that is driving the plot rather than the social implications. That turns the discussion into a nerd fest rather than a philosophical imponderable. Kyle Reese says it himself in more than one scene, this story is hard to keep track of. “Pops” may come along and say it is rather simple, but that does not make it so.

Instead of lingering on plot loopholes or time travel conundrums, I want to discuss for a moment the philosophical question, is Skynet already happening? In 1984, before we had the sort of internet and dependance on technology that exist now, it was scary enough to contemplate. Today, Google and Apple know almost everything that everyone does. The NSA is mining that data, most of us operate electronically in banking, services, communication and almost every other part of our lives. The “Genisys” app in this movie is not far removed from the kind of technological innovation that is going on right now. Earlier this year, there was the spy film “Kingsmen: The Secret Service” which postulated a nefarious takeover of technology that was more cartoon like but which could be plausible because just as in this movie, it recognizes that we are all wired in to each other in some way. A couple of weeks ago, I saw a story about an A.I. experiment where the computer got a bit nasty with the the programmers. That’s just the kind of thing that might make us believe that the combination of Artificial Intelligence and widespread dependence on computer technology might not be a match made in heaven. “Terminator Genisys” touches oh so briefly on this concept, but it is mostly focused on building an action plot to attach visual spectacle to.

I don’t watch “Game of Thrones” so I am largely unfamiliar with the work of Emilia Clark. She is made up to resemble Linda Hamilton enough to sell the idea that she is the same character. Jai Courtney is an actor I can’t quite seem to warm up to. I’m not sure he is being cast correctly but someone has decided he is the next big thing, I’m not sure he’s not the next Sam Worthington. Jason Clarke is an actor that I have admired in a number of films but he seems to be directed here to play the character of John Conner a bit over the top in the opening and then a little too subdued in later sections. Arnold continues to be Arnold. I am so much happier with him as the Terminator than as Governor that a couple of awkward moments don’t even register. There are some pieces of humor plugged into his part and the usual stoic mannerisms seem to be working. The explanation of his aging is acceptable and I thought the three different time periods he appeared in seemed matched appropriately.

The movie is ambitious and attempts to put all of the elements of the story we have come to know into play. Judgement Day has been shifted somehow and that is one of the unclear lines of thinking created by the multiple time line angle. We don’t yet know how Terminator 2.0 gets sent to protect Sarah at age nine, it looks like this is being set up as a series of films and that will be a plot point for another entry. The movie is under-performing in the U.S. market (largely I suspect because of the lingering demand for Dinosaur mayhem). Internationally it may do well enough to justify continuing the series. I don’t think anyone will become emotionally invested in the story enough to be disappointed if this is the last in the series, but I won’t roll my eyes in disbelief if a new entry is eventually announced either. 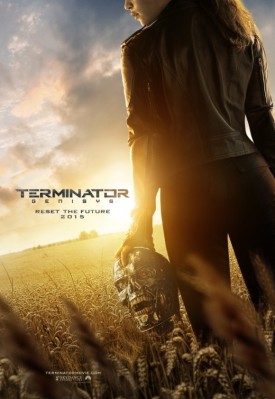 If you would like a ranking as a way of assessing this opinion, I’d put the first two films on a level all their own. I prefer the original to Terminator 2 but that is mostly because I love that last sequence with the stop motion and puppetry. “Terminator Genisys” and “Terminator: Rise of the Machines” are also pretty equivalent, to each other. They are action generating plots and each has some spectacular stunt work but neither has the depth or imagination of the first two films. “Terminator Salvation” is a vague memory. I enjoyed it well enough at the time but it is six years later and I have never rewatched it since then so it must not have impressed me that much. I’d be willing to see this film again but I will never be willing to try and figure out all the time line confusion that this entry in the series introduces.