I can’t say I am a big fan of these films. I saw the first one when it came out and did not return to the series until the previous film, Furious 6. That film had a convoluted plot, brought back a dead character, and pushed the limits of what is believable in a car chase film. Somewhere along the line the gang of criminals featured in these stories became the good guys and they now are working as intelligence operatives because they pissed off the wrong people. I don’t buy a second of any of it, but watching it was not annoying in any way and if you are willing to give up any sense of realism, recognize that gravity and physics don’t mean anything to making movies any more, than there are worse ways to pass a couple of hours.

Vin Diesel and crew are the continuing attraction. They race cars manically and they take dangerous stunts to the ultimate level. Paul Walker’s death in late 2013 delayed this film as they had to create a way to tell the story with bits of his role that had been filmed and plug in spots where there was no footage to work with. I guess you could spend the time playing “spot the CGI double” but that is too much effort for such a weightless film.

To me, the two best things the movie has going for it are reliable veteran film tough guys, Kurt Russell and Jason Statham. “Handsome Rob” is playing the villain here. He is an unstoppable tornado of violence that kills at the drop of a hat. It looks like in the introduction there is already a body count in the dozens and the movie is just starting. I like Statham as a tough guy and he is appropriately menacing in this, however, he is much like one of the vehicles that gets thrown into the story, indestructible because it would slow things down. His character shows up in places that he has no reasonable ability to be and we never see any planning from this bastardized version of James Bond. The most elite military teams in the world can hit him with a single shot despite the presence of dozens of  high tech weapons. He is a cardboard bad guy made to a boogeyman that is hard to enjoy.

Mr. Russell shows up as a surrogate for Dwayne Johnson’s F.B.I. agent. The Rock’s character is sidelined early on but he did get a nice fight sequence with Statham and he picks up a big machine gun at the end of the movie and does the best impression of Arnold Schwarzenegger ever. Kurt is cool and smarmy and gets involved in only one real action scene and it is the most believable character arc in the story and it is ridiculous. Just having him swagger in and smile is worth whatever they paid him and I would not be surprised to see his character pop up again if the series gets another film, which given the box office seems inevitable. 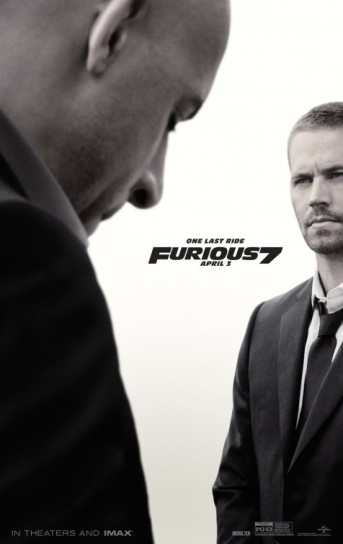 In a movie assembled from action pieces, strung together by oversimplified spy tropes, and depending on dialogue written as if it is going to be delivered in a big balloon over the characters head, the cast does what it can to sell the emotional components of the film. There is a nice epilogue with Paul walker that seems to be a fitting goodby to their co-worker. Now it is time to get back to work, crank out another one and make another couple of billion on the shallowest  movie franchise this side of “Scary Movie” parodies. The cheese is laid on thickly, and it goes down quickly and will not upset your stomach too much.

One thought on “Furious 7”