Harry Houdini was and is the most famous magician in the world. This was true a hundred years ago and it is true today. Even with the widespread medium of television, David Copperfield can not hope to supplant the name Houdini as an invocation of the world of magic. Houdini was a sensationalist and a pioneer in a variety of field, including aviation and film making. He made five full length silent features and and it was thought that this film was mostly lost, with only about ten minutes of it held in paramount studios hands. A private collector however had a copy that came from the Houdini estate. As someone at the event told it, the estate sold the film since their insurance company would not insure the house if the nitrate film remained there.(This was incorrectly attributed by me to magic historian Dick Brookz, it may have come from another TCM Guest and I simply did not remember). It stayed in private hands for nearly seventy years after that, being screened maybe two or three times for magician friends of the collector. Brookz finally managed to get the owner to turn the film over to TCM who restored it under the care of Rick Schmidlin, a preservationist who lead restorations of “Greed” and “Touch of Evil”.

As I stood in line with another capacity crowd waiting to get in and see this treasure, I chatted with Teresa from Minneapolis and Ken from Winnipeg. They had both enjoyed the Festival immensely. We compared notes on the films we’d seen and passed an hour very pleasantly. I noticed a group of people waiting to get in who all seemed to know each other, and Teresa noticed the flamboyant boots that one dark and long haired man was wearing. Everything about that group set off familiar bells in my head that I have not heard for nearly thirty years. These people were magic folks, come to see the great Houdini on the screen. My guess is that they were an invited group from the Magic Castle, located just up the hill from the Chinese Theater.  There had been a screening of the Tony Curtis Houdini picture earlier in the evening and it featured some performances from the Castle. Also featured was prominent magician and Houdini authority Dorothy Dietrich. 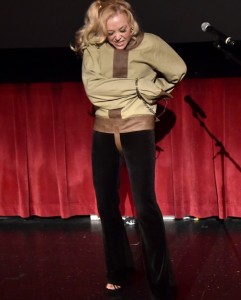 She did not perform before “the Grim game” but she provided a substantial amount of background information on the film and the steps it took to bring it to restoration. Along with author and collector Brookz, they shared a piece of Houdini memorabilia and did a rising card trick with a vest that Houdini once owned.

The trick was fine and the audience was enthusiastic but everyone was really waiting for the movie to start. One of the reasons that the screening started a little late is that the small orchestra for live accompaniment had to be set up. This was a silent film and a new score had been commissioned by TCM for the event. The composer would also be the conductor for the piece and the four or five piece “orchestra” would play live immediately below the screen during the film.

“The Grim Game” is a melodrama full of convoluted story twists designed to give Houdini a chance to show off his escape expertise. From manacles, to jail cells and straight jackets, nothing could keep our intrepid reporter from reaching his girl and solving the case. The movie contains a half dozen escapes and an thrilling aerial accident that really took place and was left in the film. Neither pilot was seriously injured but the dramatic sight of two planes colliding in the sky could not be wasted when film was rolling.

I’m not a music expert so I hesitate to be too critical of the score. It is done in the style of the times and it had a old fashioned tinny sound to many passages. It is certainly an authentic representation of music at the time but it seemed a bit repetitive to me and although it was well played and synched to the story, there were passages that seemed ill used and some dead spots during the film. It is probably my jaundiced modern ear that left me satisfied but not astounded by the work done here.

The film is an interesting treasure of century old movie making and a historical gem detailing the skills and showmanship of the star. It was a bittersweet presentation because it was the final film of the Festival and it brought the curtain down on all but the wrap party. It is also the conclusion of my week long recap of my Festival experience. I hope you have enjoyed it as much as I have.