Way back in 1987, I visited my favorite store in Hollywood, “Hollywood Book and Poster”. At that time they were located on Las Palmas, just North of Hollywood Blvd. It was a cavernous room with high ceilings which made it possible to display all the cool new posters that were for sale. I’d purchased a number of items over the years, usually in the $10-$40 range. The most notorious find was the original “Revenge of the Jedi” poster I bought when the movie was still called “Revenge of the Jedi” in December of 1982. Last year I took it to a screening of the Drew Struzan Documentary and the artist signed it for me. If you click on the image it will take you to my story about that day. 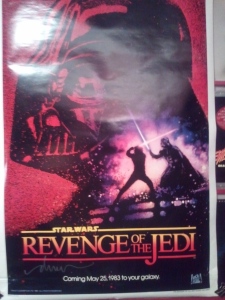 1987 was the Tenth anniversary of  the original release of “Star Wars“. When I walked through the store that day, I spotted a beautiful lithograph poster on a thick piece of paper stock that took my breath away. It was a pricey item, at $120. I’d not seen anything like it and because I am a geek, I decided I had to have it. It became one of many Christmas gifts to the family that were a tradition between my wife and I.

It was much too nice to put in one of the standard poster frames you can get at Aaron Brothers or other stores, which I used to display many of my other posters. The idea of having to bend a corner to fit it into a prefabricated frame was an anathema to me. We decided to wait and get it custom framed. Flash forward twenty-five years: we have moved into our house for about eighteen years and I decided to do an inventory of my posters.   One of the things I find is that poster I bought back in ’87 and had done nothing with. After having had several pieces done at a local business that specializes in framing (Richards Framing), I knew that the project would not be cheap. So again I bide my time and wait for an opportunity to splurge.

The opportunity came up as I am celebrating my 57th birthday this year. There is a new Star Wars movie coming, and it turns out, as I expected, that the poster I bought in 1987 was painted by Drew Struzan himself. It was a print run of 3000 and he had signed them all. I suspect this was one of the projects that ended up unhappily with the agent he worked with at the time and was mentioned in the documentary. I sure hope he got paid because the image is fantastic.

I just returned from my friendly locally owned and operated business, where Karen, the owner, has done a fantastic job on the project. I have several images to share of the project.

We picked out the matting based on the colors in the poster and she has a very sharp eye for color. This is a perfect match of the blue and orange hues found in the art work.

I tried to get a slightly different view with this second shot and I turned off the flash. Although neither of these images does justice to the poster itself, the mat and framing work is pretty evident. At the moment I don’t have it up on the wall but I expect that to be remedied shortly. I will include a shot or two at the bottom of this post when I get that done.

At the foot of the poster is the numbering of the lithograph and the signature of the artist, it is just below and off to the right of the image of Carrie Fisher as Princess Leia. I tried to get a close up, but I’m working with a pretty basic older digital camera and I don’t always know what I’m doing.

You can see that this is number 739 of the 3000 prints in this run. It’s a sweet little birthday gift that originated as an impulse Christmas gift and has germinated into one of the nicest pieces of movie memorabilia in my collection of geek worthy stuff. I hope you enjoyed the share and if you can ever make it to our neck of the woods, I’d be happy to have you come and look at it in person. It will definitely distract you from the debris in the rest of the house.