Returning to Santa Anita for the second day of the Eighth Annual Best Picture Showcase. Last week we ducked out just before the start of “The Wolf of Wall Street” since it was not a well liked film at our house. We drove over to dinner at a local salad place, cruised back home. Settled Mrs. K in since she was not feeling well, drove back to the theater, stopped for some drinks at the snack bar, and still ended up watching the last forty minutes of the movie. Geez is that thing long.

This week includes the one film I have yet to see an that is Spike Jonez “Her”. I here good things and I will have a mini review later this weekend.

The folks at AMC have elected to start the screenings at noon this year, which is a lot later than has been the case. I’m hoping that the 10:30 start time for “Gravity” does not make this a hard one to stay up for. The space drama would be my favorite for the big award this year, but my prediction is that “12 Years a Slave” will be honored. It is a worthy film, but not quite the achievement that some have suggested. 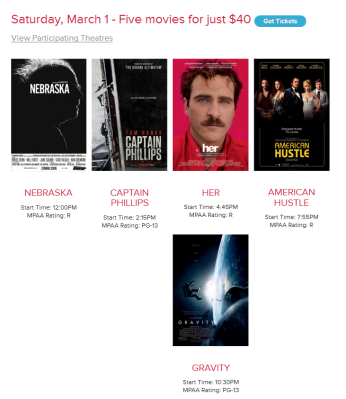 It should be another great day with the Yennys. Last week they only did one round of trivia, we still came home with some loot. Let’s see if we can get in on it again. Below are the previous review links.