The Way, Way Back

Put away your popcorn, forget robots and superheroes, and don’t look for any guns or explosions, the best film of the summer is here. “The Way,Way Back” is a basic story that relies on understanding a character and developing an emotional connection to that character. That the film takes place in the summertime is a bonus that will make this a perennial must watch in the month of July for years to come. It will not replace “Jaws” as the go to July Fourth movie at our house, but a couple weeks later, when the summer season is settling in, I will be bugging everyone to sit down and watch this as a family. The film is not overly dramatic and it is not hysterical either, it is just real enough to touch you and make you remember those awkward moments in your own life. It is nostalgic without the trappings of visiting another era.

Duncan is a 14 year old kid, trapped in a family nightmare and only able to see the world as it sucks. He has every right to. His parents are divorced, his Dad is not present in his life and his Mom has found an unsuitable partner to fill the void in their lives. Trent is not the worst human being ever, but he is the worst for Duncan at this point in his life. Steve Carell plays the new boyfriend as a little self righteous and weak at the same time. Toni Collette is Duncan’s uncertain and awkward Mother, a part she has grown into pretty well over the years. It is not until the end of the film that we begin to understand her at all. Yet, these are not the main characters of the story. The film focuses on Duncan and the way in which he is having to adapt to seeing the world from a different perspective.

The two different paradigm shifting relationships in the movie are the cute girl next door and an inappropriate but ultimately essential mentor figure that he attaches himself to. Liam James plays the overwhelmed young Duncan. He gets the suppressed anger and the awkward small humiliations just right. One of the reasons he works so well in the movie is that he is stingy with his smile. It does not come easily and it never seems to arrive at the moment we expect it. Part of the reason it is difficult for Duncan to relate is that he has not found a complementary force in his life yet. Mom can’t provide it for the moment. Trent does not fit at all and girls are a mystery that are slightly beyond his reach at this stage of life. Lucky for him, and for us as the viewers, Owen drops into his life.

Owen is a local, at the water park near Trent’s summer home, where Duncan’s Mom has dragged him for the summer. Sussana, the cute, slightly older neighbor girl is potentially a friend but Duncan hasn’t learned how to communicate as an adult yet. Owen seems the least likely to be able to help him with those skills, since he is in arrested development himself and speaks mostly in jokes and asides that are hip but maybe not always appropriate. But Owen is older, and wiser than he cares to admit and he has one other special gift. Owen can feel the need that Duncan has to break out of his shell. Owen instinctively responds to Duncan, despite the fact that Duncan can barely get out a coherent sentence. Maybe he recognizes a younger self, or like a lot of partnerships, simply fits in because the other person is letting them. The friendship between a grown man and a 14 year old kid works in a non-creepy way.

OK, so far I have neglected to say that Owen is played by the amazing Sam Rockwell. Over the years, Rockwell has provided more enjoyment to me in movie theaters than could be measured. He has played serious and comedy roles and is willing to inject himself into a story in ways that are not always going to draw attention but do shore up the film. This film lets him do both. He electrifies the movie every time he shows up, but he doesn’t steal focus from the character of Duncan who is after all, the main point of what we are watching. Here is an easy way to describe it, Rockwell is a soda bottle full of charisma and energy and the story allows us to pop the top off and let the fizzy lifting goodness flow over us. It may seem in retrospect too contrived to work, but while watching the movie I never felt taken out of the story. The impact that Owen has on Duncan is actually subtle even if his character is not.

There are some dramatic fireworks but they do not exceed the situation that the characters are in. It never feels over the top. The story is populated with unpleasant characters, funny neighbors, thoughtless idiots and surprisingly deep and empathetic kids. It is a coming of age story for Duncan but also for his Mom and Owen as well. Younger viewers may not quite get the reference to the title because for more than twenty years now, automobiles with a third set of seats, have all had those seats facing the same direction. The old (or classic wagon as Trent sees it) station wagon that begins and ends this summer trip has a traditional rear facing seat. Kids traveling with their families in the old days often were on a completely different trip than everyone else because they look at the surroundings through a different perspective. That’s what happens here. Everyone gets to see the world from a different view, and it’s not all bad.

The overwhelming majority of reviews of this film have been negative. I try to avoid reading other people’s material until I have seen a movie myself. I want my opinion to be MY opinion. Yet in the past month the stink on this film has pervaded the inter webs. The trailers make the film look like a refugee from the late 1990s, and Ryan Reynolds couldn’t buy a hit if he won the powerball. Well let me tell you, there is a reason for all that chatter and smell, the movie isn’t very good. I suppose it is faint praise to say I did not hate it, but it is likely to end up on my list of disappointments at the end of the year. I can’t imagine that there will be many more films that waste as much potential as this.

I’m a fan of Jeff Bridges. He is a terrific actor and he has a great body of work. This movie probably seemed like a lark, something that would be light and fun and just right for the summer. In concept it is. Or maybe I should say it was. We basically saw this movie in 1997. You know what the reference is. I am going to try and go the whole review without making any direct reference to the film that everybody knows this is basically a knock off of. Instead of having all those qualities that I am guessing Mr. Bridges hoped for, this movie is lazy, loud and not very clearly thought out. The plot is straight out of every sci-fi/action film that precedes it. A hero is plunged in over his head, learns the ropes from a mentor, discovers the nature of his betrayal is more significant than he thought, and has to stop a plan that will let in the end of the world. Check almost every comic book film of the last couple of months or years. Look it can still be done with pizazz, like “The Avengers” or “Pacific Rim”, but there is no flair here. It just hits the notes and moves on to the next riff.

Bridges should be a selling point but instead he is a reason to dislike the film. The accent he affects here is as ridiculous as Nick Cage in “Peggy Sue Got Married” and as hard to understand at times as Bane in the IMAX scene trailer for last year’s “Dark Knight Rises”. In addition, he never stops rambling on. The jokes might work if they were polished and delivered with some timing, but there are so many of them, they are rushed and sometimes they just repeat the same bit of business we had in an earlier scene. There are at least four spots where we are treated to a review of the story concerning Bridges characters mortal remains. The last one tries to make a joke out of the phrase “SkullF**K”. Instead of a laugh, it is just a moment in the movie where we are saddened by the lack of any creative and humorous spark. At one point in the film, Ryan Reynolds character tells Roy (Bridges) to just stop talking. Everyone in our group agreed it would be good advice.

The CGI special effects go overboard to make disgusting “Deados” gross and creative. They succeed only in the gross part of the equation. Never are any of them particularly frightening and so much of what happens is cartoony that it undermines any interest in the action. Some of the problem is that we have seen all of this before, and the second problem is that it was not well executed, and the third is that they go to it whenever they need something to pump up the energy. Instead it is energy draining. Even the name for the bad guys “Deados” feels lazy. It is supposed to be clever and the slang of the R.I.P.D, it doesn’t feel organic, it feels like a compromise to make the story simple. 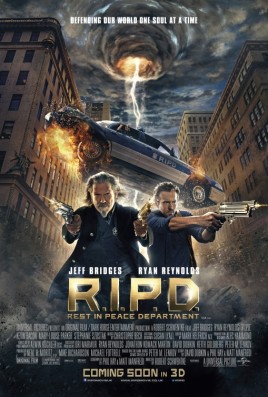 The concept of a “Police” force pursuing the undead in the afterlife is not a bad one. It’s just treated badly by the creative team that put this together. There is a funny idea to use an avatar character in the place of the actor cast in the part, when the R.I.P.D. encounter the living. There is a good set up of the two alternate visions, and then they do nothing with it except repeat the same joke. James Hong is one of those character actors I like seeing in films, but he may have two real lines in the movie and neither of them was done in an interesting or humorous context. It was a complete waste of the potential and another example of the laziness of this screenplay. There is some nice production design, and not all of the visual effects are failures. I liked the sequences where some characters are frozen in time while others are moving rapidly, the cinematography on those shots looked good. Yet every time a “Deado” gets revealed, it just looks cheesy, and not in a fun way. I saw two Ryan Reynolds films and two Mary Louise Parker films in the same week. The good one for each of them is the one that is not this. At the end of the story, it was clearly set up for a series of films. Given the autopsy that this movie has been given, those plans can…well, you know.