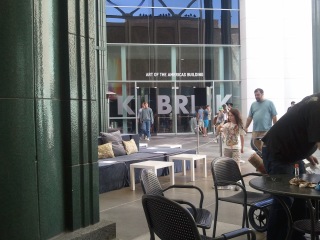 The Los Angeles County Museum of Art has had a featured exhibition of Stanley Kubrick material and unfortunately it ends this coming week. I’ve been meaning to get to it for several months and of course I waited until the last week of the exhibit, but I did manage to get over there and had an amazing time looking at artifacts from all of the Kubrick films and some other projects as well.

The entry had a series of film sections from his major motion pictures, with some words from artists, critics and Kubrick himself. We scrolled through the dozen or so bits in about twenty minutes and then made our way into the entry hall which features a number of cameras and movie posters. I of course would be happy to have this wall to display in my home.

There was a room dedicated to his work as a very young photographer, primarily for Look Magazine. Several shots were on display that featured Hollywood connections and there were scrap books of magazine articles featuring photos he had taken. The first photo that he received a professional credit and payment for was a shot of a sad faced news vendor, as he looks over the headlines on the papers announcing the death of FDR. There was also an elaborate set of materials that he had put together for an abandinde project on the Ghettos of Poland from the time of Nazi occupation. The amount of work he put in to simply move on was incredible.

The gallery did not seem to be organized in any chronological fashion, it did seem to flow very smoothy through all of the film projects although some clearly received more attention than others. The section on his last film, “Eyes Wide Shut” felt to be the slimmest, although reading his words and looking at the background material, I think i might appreciate the film more the next time I see it. 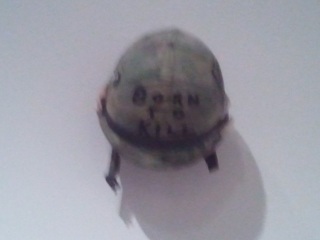 High on the wall was the helmet worn by Private Joker in “Full Metal Jacket”. There was also a model helicopter that had been used in the production. Each section had elaborate versions of the script with Kubrick’s very detailed notes on everything in the scene. His planning was clearly meticulous. The history of each production was described, especially interesting was the display of some of the original source material. In the case of this film, there was a paperback version of the novel that started Kubrick on the movie.
The exhibit was not thin but it was less in the works from the 1950s. His two collaborations with Kirk Douglas had large photos and detailed shooting material. “Paths of Glory” is probably the first of his masterpieces and the themes were nicely described by the curators of the exhibit. “Spartacus” was not his project, in fact he came on after shooting had started and the first director had been dismissed. Kubrick added some much needed battle scenes and the sequence where the Romans watch Douglas and Woody Strode fight for their pleasure and they can hardly be bothered to pay attention, was clearly a Kubrick shot. We see the battle from over the shoulders of the viewers as they chat and gossip. It looks like a view from a window with people sitting on a couch in front of the frame. It was the only film he made where he did not have total control over the picture and he viewed it as something of a disappointment.
Lovers of Horror would have enjoyed the way the axes were displayed from “The Shining”. They were basically buried into the wall as if Jack Torrance had just tried to take us out. The dresses from the two little girls were hung up next to each other, just as if we were Danny and came up on them on our tricycle. There were some interesting letters from Saul Bass, who was pitching advertising ideas and poster artwork. While Bass was enthusiastic, we can see Kubrick’s notes on each sketch and he did not like any of them. There was also a model of the maze from the end of the film and a description of how it was shot. The highlight of that room however had to be the typewriter that was actually used in the film and contained the page with the script that clearly gives away the insanity that has taken over Jack Torrance.

There were two long rooms displaying material from Barry Lyndon, including costumes and the evolution of the script. The other element of the second room was the amazing collection of material that Kubrick had put together to create a film about Napoleon. It may well be the greatest movie never made. I know that the work was immense, he had his own card catalog drawers for the reference works he had accumulated.

There was a small alcove room that was playing a series of film clips and highlighting the music that was used in the films. It was a little claustrophobic, and while it was interesting, I did not stay through the whole loop . To gain entry to that room, one had to move through the section that featured material from “A Clockwork Orange”. There was a series of newspaper articles about a British man who had modeled his behavior on the droogs from this film. Kubrick had defended the movie vigorously from criticism over the violence, but after the events that occurred in the real world he held the movie out of circulation in Great Britain for many years after. In another display, one shelf over were all the mock up newspapers from the film, covering “Alex” and his trials and subsequent rehabilitation. It was an interesting contrast to see the two sets of news right next to each other.

The details of the shoot were highlighted by a series of pictures from the set from the attack on the couple by Ale and his gang. The music sequence from this film that I did watch in the side room featured the treatment which of course involved the score by Beethoven.

I can’t quite remember which section featured the discussion of “red” in Kubrick films. The color has a distinctive role to play in the films, and the significance was indicated by a series of shots from the various films that showed how the color was being used. The clothes that are cut off of the victim in Clockwork and the blood on the wall behind Private Pyle are two of the examples.

There was a passageway from the Clockwork Orange displays to the Barry Lyndon rooms that featured the film A.I., which Kubrick had long planned and then passed off to his friend Steven Spielberg. The drawings that went into the visualization of the movie clearly illustrate why he took so long to get the film started. He was waiting for technology to catch up with his vision. Most of the drawings were from the 1980s and the film did not get made until after Kubrick’s death in 1999. It was released in 2001.

To the right here is a close up of a miniature set reproduction of the War Room from Dr. Strangelove. It looks amazing and you should know that the chairs around the table are about the size of a paperclip. The screens in the display were actual scenes on display from the screens in the movie. The technical material here was the most involved in the exhibit. Cameras and lenses and small script elements made up most of the display. It was on one end of the entry gallery and right next to it was the material on Lolita. There were a number of photos frames of Sue Lyon in costume and on the set. They were all in color and a magnifying glass on a fixed rail allowed the viewer to scroll down the line examining them in much the way a director or photographer like Kubrick might have in making tiny decisions about costumes, make-up, props and lighting.

Friday night, I re-watched 2001:A Space Odyssey in anticipation of the trip to the LACMA. I was sure glad I did because the highlight of the exhibit for me was the material presented on what I think is his greatest film and certainly my favorite Kubrick film. There were two sections of space devoted to the 1968 epic, it included a replica model of Discovery hanging from the ceiling as well as costumes and masks worn by the performers in the “Dawn of Man” sequence. In the center of the first room were pieces of furniture found on the orbiting space station visited by Heywood Floyd on his way up to the Moon.

There was an interesting discussion of how futurists and designers from a number of big companies contributed suggestions to make the vision more real. I find it interesting that at least two of those companies, Bell Telephone and Pan Am, no longer exist and did not make it to 2001. Frank and Dave do seem to be absorbed in their i-pads while on Discovery, so it is not clear to me why IBM did not hit that technology before Apple did. There was a film clip that I saw on some other material explaining the process by which the circular section of Discovery was rotated to produce the effect of the astronauts walking in a vertical circle at times. The actual helmet used by Dave Bowman was on display and it had an interesting front projection display to put the actor in the helmet along with some of the visual effects from the film.

The most startlingly beautiful thing I saw in the whole exhibit was a miniature reproduction of “God’s” white room from the end of the film. This model was suspended above the crowds heads, thus requiring us to look up to see it and leaving many patrons in slack jawed awe as they stared into space.  The Monolith is clearly visible in the center of the room It was a very dramatic piece of design for the curators of this project, and I was lucky that it was among the final things I came across.

I don’t know if this exhibit is touring, if you see it in your local museum be4 sure to take the time to visit. Anyone who admires the work of one of the greatest film directors of all time will feel privileged to have spend even a small amount of time in the shadows of his genius. I know that is how I feel.

2 thoughts on “Kubrick Day at KAMAD”