Top Ten Moments I Experienced in Movies in 2012

Let’s face it, not all movies are worthy of two hours of our attention, where as some are deserving of even more time. It is often the brief moments in a film that redeem it or that make us remember the rest of the film fondly. I selected ten moments from movies this year that reached up and slapped me. They are sometimes poignant, sometimes harsh and sometime hysterical. Here are ten moments to remember 2012 by.

10. The U.S.S. Missouri makes a guest appearance in Battleship.

I know that the movie was crap. I also am aware that it is widely despised. I however may be one of the few who overlooked it’s shortcomings and enjoyed it for the popcorn junk snack it was. The one part that worked for me was when the old-timers launch the Missouri back into battle. Of course it is impossible, but the AC/DC music, the shots of Big Mo, turning into the ocean, and the real heroes of WW2 jumping to duty gave me a rush of patriotic adrenaline which made me happy.

This is the point of the story where Katniss goes from a competitor trying to survive, to a real icon of a revolution. Her brief alliance with Rue and the honor that she shows her, stirs the residents of District 11 to a mild riot. Just the sort of thing the games are supposed to prevent. This is the match that lights up the rest of the stories and makes the material rise emotionally. It brought a tear to my soft-hearted eye and made me care a lot more about the stuff that was going on on the screen.

This was the most tense and horrifying scene in the movie. This is the only moment that Prometheus rises to the level of the original Alien. We are terrified by the concept that our own bodies can harbor the dangers we most fear, and it takes an act of incredible will for Elizabeth Shaw to take the action she does. The scene is gory, suspenseful and the one truly scary moment in a film that needed more moments like this.

7. The Grey: Liam Neeson Stands Up to A Wolf by Getting Ready to Punch It

If you have ever seen the inspirational poster of the mouse flipping off the eagle as it is about to get torn to shreds, you will understand the impact of this moment. Neeson’s character is not going to go quietly into the night. He is going to kick and scream and fight for every moment of life he can get. Whether it could ever work is beside the point. What matters here is that his character is going to try anything he can think of to keep living. This deeply philosophical story is summarized nicely by the deceptive idea that this is an action picture where Liam punches wolves. The real question is whether or not we should bother? This film answers that question very clearly. 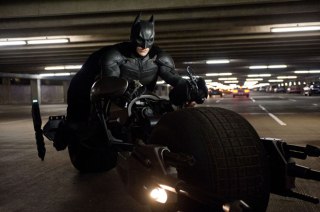 The moment we waited for in the movie. Batman comes out of hibernation and begins to fight for Gotham again. The surrounding areas during a police chase all go dark, and then, to the pounding score, Batman drives out of the darkness on the Batpod, to run down the criminals who just invaded Wall Street. Like the moment from the Michael Keaton Batman film, when he opens his safe and reveals Batman’s costume, we suck in our breath and wait for the fireworks to begin. It is a signal that our story is about to take off.

Sometimes the super intelligent industrialist, the heroic warrior, the Norse demi-god, and all the SHIELD agents just over think their approach. The Hulk just gets right to the point and we all laugh our asses off and applaud. This is a moment of genius, like Indy pulling his gun and shooting the swordsman, the direct approach is often the most effective.

Christoph Waltz’s character has outwitted a hundred idiots in his career.  He has used cleverness and language to move successfully into his career as a bounty hunter. He is even as gracious as he can be when he gets outwitted. He is simply not going to knuckle under to a stupid request to be treated as a civilized person, by the lowly scum of DiCaprio’s Calvin Candy. Even though they have achieved their goal and could safely leave by giving in, Schultz simply draws a line in the sand, and the fireworks that result are the orgy of violence we have waited for through the whole movie.

3. SKYFALL: 007 Has Two Great Moments in One Movie

OK, maybe it is a cheat, but It is my favorite movie of the year and I did not put these at the top, so indulge me a little. In the pre-title action sequence, Bond makes a daring leap from a back hoe that is collapsing on top of an escaping train car. As he jumps into the passenger car, he takes a moment to pay attention to his stylish appearance. Like Connery pulling off a wetsuit to reveal a tuxedo, or Roger Moore straightening his tie after flicking a bad guy off a building, this was a moment straight from the hearts of 007 lovers everywhere.

As a fan of James Bond since I was seven or eight, there are many iconic moments, characters and gadgets that I recall with great adoration. In closing the second act and beginning the third in Skyfall, the film makers bring back an old ally in a reveal that frankly gave me a little too much of a charge. Thankfully the only body excretion was a tear.

This is not a great film, but I was entertained. I will never be able to erase from my memory (nor do I want to) this terrific piece of dialogue.

1. Les Misérables: I Dreamed a Dream

There were a lot of things I did not enjoy about Les Miz, but all of them are forgiven because we got Anne Hatheway doing the key song from the play. If she is not the Academy Award Winner for Best Supporting Actress, I may never watch the awards again.