OK, the build up was too great, the addiction was too strong, and my need to see this overcame my common sense. Yesterday evening, when my daughter got home from work, I asked, are you up for a midnight show? She of course is genetically wired to love James Bond, and she is a spoiled child as am I, so we ended up at the local cinema after a long day, with an early morning staring us in the face, and waited for the start of the new 007 adventure. I thought I was done with the need for these masochistic midnight screenings. It appears that the fifteen year old boy that is still inside me somewhere, has enough influence to make me ignore all the warnings of old age. So, the big question is, was it worth it? Not to put to fine a point on it but HELL YEAH!!! 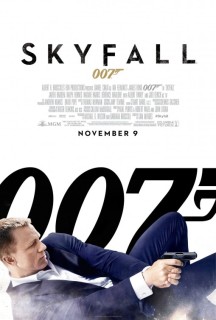 Skyfall met my expectations and those expectations were pretty high. After Casino Royale was such a success in my mind, the letdown of Quantum of Solace made me very cautious. There was a good deal of wisdom in letting the franchise percolate for an extra couple of years. We got a chance to reassess Quantum (not as bad I as originally thought) and we were forced to anticipate something more significant. With the fiftieth anniversary of the cinematic James Bond, it was important to get this one right. The producers went all in with an A list director in Sam Mendes. They got Academy Award winning actor Javier Bardem to play the villain. Two other veteran actors fill in key roles, Ralph Fiennes and Albert Finney. Finally, they take a pretty solid story and load it with smart dialog mixed in with high tension, and then some fantastic nods to the fifty year legacy that they are continuing with this film.

As usual, I will try to remain discreet as regards story. My wife mentioned a rumor that she had heard a week or so ago, and I was irritated to even have it in my head, regardless of whether or not it was true. The pre-title sequence is an exciting chase and fight that takes place in Istanbul. I recognized it immediately not only because of the familiar skyline, but because there was a similar rooftop chase in “Taken 2” just a month ago, that appears to have used some of the same locations. The story and locale work very much better here than they did in the Liam Neeson sequel. The chase involves cars, motorcycles, rooftops, and a train. The action is splendid with a memorable visual of Bond straightening his jacket as he jumps off a steam shovel that he has just used to move from one train car to another. That oh so brief act, carries so much Bond imagery as history it is amazing. I got an immediate flashback to Connery pulling the wet suit off of his dinner jacket in Goldfinger, or Roger Moore dusting off briefly after a fight in Cairo. Those little bits of business tell us all that Bond is both a fighter and a dashing man about town, even in the wreckage of the moment, he wants to look right. It is a touch of humor that was mostly lacking in the first two Daniel Craig outings. It is also a portent of things to come.

The title sequence is beautifully done and only has real meaning once you have seen the whole film. It features what may be my new second favorite title song. Adele’s recording is haunting and fits with the mood of the film. It can’t reach the hyperbolic urgency of Goldfinger, but it’s not trying to. She has simply set the tone for the movie with a smashing pop tune that makes you recall earlier Bond film themes, but is completely original. It has been more than thirty years since a Bond Theme song was nominated for an Academy Award, I think the drought is about to be over. I will mention only one other thing about the opening of the film, it lacks the gunbarrel tracking shot that has proceeded all the other Bond films. It does make an appearance, but it is in a different spot and it works like gangbusters when it shows up.

It gives nothing away to say that the story revolves around a revenge plot against MI6 and M herself. The opening sequence has set us up for understanding why someone might have it out for the head of the British Secret Service, especially an insider with long standing resentments. Bond himself gives into some of those resentments, but being Bond, in the end he manages to overcome his own doubts through sheer force of will. As the plot unfolds, we are also given a clever narrative that explains the twisted logic of the scheme. Bardem’s Silva character oozes festering anger and demented analogies. The words he is given to express them work really well to make his character an enemy that Bond will want to throw down. Like his Academy Award winning villain from “No Country for Old Men”, Bardem’s character does much of the acting with his hair style. There is something incongruous about this dark Spaniard with bleached blonde hair. Every time there is a sequence with Silva chasing or being chased, the hair is a reminder of who the villain is and where he is in the scene. Add to the visual his great line readings and you have the enemy with the best character development since Grant in “From Russia with Love”. 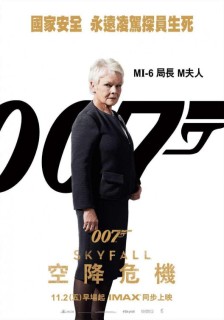 Much of the story also involves some of the intrigue that goes on around the offices of MI6. Politics is a part of the story, but it is a generic type of political power infighting. M is faced with tough decisions everyday, sometimes about who lives and who dies, but also in how money is spent and resources are allocated. The fact that she is, in the end, a bureaucratic figure, accountable to political interests is also part of the story. Judi Dench makes her seventh appearance in the role of M, the head of MI6, and she has one of the best story lines for her character of any of the earlier portrayals. Having once been identified as the “Evil Queen of Numbers”, it is nice to see how she has come around to view the need for field work and especially the double O section. The relationship she has with Bond continues to be a professional one, but it also is layered with a deep seed of mutual respect and loyalty. Her introduction as M in Goldeneye” was a little controversial. Subsequent outings in the Brosnan Bond films ranged from serious to nearly comical. In the Craig movies, she has been a stern authority figure and no cheap laughs are forced into her dialogue.

There are several of the usual action sequences. Bond follows and fights an assassin in Shanghai, matches wits and fists with thugs in Macao and confronts a platoon of hired gunmen as part of the climax of the picture. Almost all of these sequences are filmed in a traditional action mode, without the shaky cam and quick cuts that have marred so many recent features. There is sustained tension in the capture of Silva and then in the interrogation process when we know that bad things are coming despite all surface looks. When there are flaws in the story, they are usually quickly shuttered aside by an engaging piece of action or some dramatic visual. I can’t say that the story is perfect. The main reason is that flaw that most serial killer/revenge/procedural stories have, the plans of the villain always work out as planned, despite their complicated nature. The number of paid mercenaries that Silva has to sacrifice in order to sell the bait in his trap is really high. No one seems to question why they are doing something, and they ignore the consequences to others and proceed to follow orders in spite of their foolhardiness. These are minor quibbles that are designed to show you that I am aware of the films faults, so that when I praise the movie I don’t simply sound like a lovestruck fan boy.

I will finish up by noting several satisfying moments in the movie. The new Q, is not just there for comic relief, and is not always a likable character. For someone so full of himself, he make a cardinal mistake that I could see a mile away. He does have some great exchanges with Bond, some of which gently salute and mock simultaneously the prior Bond gadgets. An old friend of 007s returns in the last third of the picture and the warmth of that return was palpable in the audience. The glee I felt as an homage to the 50th anniversary was gratifying. I got the feeling that the producers and screenwriters recognize that they had strayed a bit from those things that made Bond fun for fifty years. Quantum was so serious and set on making Bond over in the mold of a Jason Bourne, that they lost the legacy that was their trademark. This movie brings it back. The series feels as if it is fresh and ready to move into the future but that it knows what the past means and they are not going to forget it again. There are new characters that I look forward to seeing return in future Bond adventures, but I don’t want to anticipate them too much because I want to revel in the Bond we have right now. I’m going back to see it again tonight and I may go on Monday as well. Welcome back James, your legions of fans are going to be happy to spend another fifty years with you.