This is probably the best movie of the year.

Somewhere along his career trajectory, Ben Affleck went from  leading man  handsome guy, to dim witted lucky guy, then overrated talentless hack, to promising director, to full scale talent behind the camera. His has been a roller coaster film career and with ARGO, he has arrived back at the top, with a film that will probably be competing for the biggest awards at the end of the year.  Everybody loves to tear down the ones who make it to the top in a field where talent is envied. Watching the vultures go after Affleck for several years has not really been a pretty sight. Admittedly he made some bad choices, both in movies (Gigli) and in girlfriends (JLo). The fact that those choices did not work out did not demonstrate that he was a failure, they in fact showed that he was a work in progress, taking risks along the way. Whatever he learned from the doormat days, he has turned into something very productive. I have yet to see his other directing features. “Gone Baby Gone” sounded a little too harsh for me at the time, I just don’t know about a film concerning child abduction and murder (I skipped “The Lovely Bones” despite an Oscar nominated performance from Stanley Tucci, an actor I greatly admire, for similar reasons). I had every intention of seeing “The Town”, but it has just slipped by me . ARGO, on the other hand, hooked me from the very first trailer because the story is one of those things that I remember from the dark days of the seventies.

This is a spy story where the C.I.A. are the good guys, the Iranian Revolutionaries are the bad guys, and the Canadians are our best friends. In other words, this movie reflects reality and my own world view. The seventies were filled with movies in which the intelligence community of the U.S. was overrun with megalomaniacs whose sole purpose was to pull the strings on events of the world stage, for their own benefit. I liked most of those films but I always took them with a grain of salt, because it never seemed to me that people who wanted to protect the country in the first place had to be automatically evil. After the Church hearings in  mid-decade, there were even people who thought we did not need human intelligence agencies anymore, that computers and satellites would fill all those needs. We all now know better and this is a story that celebrates the accomplishments of our intelligence community rather than trashing it. Of course they are not perfect, but they are also not the Keystone Cops with delusions of being Dr. Evil in their heads.

The taking of the U.S. Embassy in Tehran in 1979, is recreated on screen here very convincingly. I think some of the shots were real news footage but most of the opening section is a chaotic visualization of a tragic day in diplomatic history. The six Americans who escaped from been taken hostage did so because of the layout of the Embassy, not because they were smarter than the ones who ended up being held for more than a year. They were smart enough to take the small window of opportunity they had, and run with it. It is at this point, that our friends the Canadians stood up for us. The Canadian ambassador takes in the six at great personal and diplomatic risk. The nearly three months that the Americans hid out with the ambassador, were  a period of time that any moment could have ended in disaster. Afflect as director, manages to build tension not only in the usual ways, but in subtle ways. The performances by the actors portraying the six Americans are subtle. They don’t over emote, they sweat under the strain in realistic ways. There is self recrimination by one, who ignored his wife’s pleas that they leave Iran months earlier. There is stress indicated not by yelling matches but fearful conversations. Simply chafing under the need to be inside all the time, one of the Americans has to step outside for air, just to be able to breathe. That action frightens everyone and you can see in their faces the terror that they faced. When Affleck’s CIA agent arrives and tells them his plan, they are even more frightened than they were before. The fear comes from the atmosphere they were hiding in.

The director does a great job of showing us the streets of revolutionary Iran. There are random teeming protests and men with machine guns on nearly every corner. Suspected loyalists to the shah are arrested, imprisoned and even hung from construction equipment in public. We hear how bad the police state before the revolution was, but we see how bad the mob rule of the revolutionaries is during the story. The music in the film was right for building tension but not drawing attention to itself. As our CIA operative arrives at his hotel, we get point of view shots that highlight the fear on the streets. Every official that asks a question feels like a potential bomb, just ticking closer to an inevitable explosion of violence. All of this was done efficiently, without too much lingering and without drawing attention to the film techniques. It reminded me of the David Fincher “Zodiac”. Everyday things feel wrong, even though on the surface they appear to be stable for the moment. At the end of the film, the story uses more traditional means of building tension, including last minute door closings, transmissions slipping out of gear, and pictures being matched up just as the escape is under way. All of that is handled well, and although we knew the outcome before the movie even started, it was still tense.

The light moments of the film come from the deep background story that the agency sets up to get the Americans a cover that will allow them to escape. ARGO is the title of the fake movie, that the six will supposedly be scouting locations for in Iran. To be able to sell the idea, the CIA sets up a production company in Hollywood using an Academy Award winning make up artist and a past his time producer. The make up guy was real, he later received recognition from the government for a variety of help he provided to the CIA, the producer is an invention, but represents exactly the kind of personality that would be required to pull off this deception. I have read enough material about Hollywood, and lived in Southern California long enough to be able to say they nailed the spirit if not the exact truth of the insider world that made up that world at the time. Anyone could call themselves a film producer, but to get coverage and connections, you needed insider help. The most true moment in the Hollywood scenes of the film occur as Alan Arkin as the producer and John Goodman as the make up guy turned producer, try to option the script for ARGO, from the agency that represents the screenwriter. Richard Kind plays the agent and the banter he exchanges with Arkin is exactly on point. Movie guys bullshit each other, insult each other and respect each other all at the same time. Each one is trying to outmaneuver the other on a deal and they basically lie to do so. 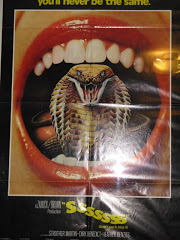 It always seems strange to me when a period piece is actually reflective of a time in my own life.When I was at USC as an undergraduate, there were always protests against the shah by Iranian students. When the revolution came, I was taking a class from my favorite history professor on revolutions and the Iranian revolution was the last of the four we studied. When I was making deliveries of photo materials all over Hollywood, I saw the studios and the restaurants that the film makers frequented. Everything in the movie felt real. I loved seeing the poster for obscure films in the production offices as the CIA and the movie guys are putting their film together. I remember films like “When Dinosaurs Ruled  the Earth” and the poster in Arkins office for “Sssssss” is on the wall right in front of me as I type this. The glasses and hairstyles of the 1970s are spot on. I was looking at the actors portraying the six Americans hiding, and I noticed how they had their hair parted the way I did at the time. The luggage that they carried was not drawn on wheels but dragged and picked up as it would have been at the time. People smoked in public buildings and on airplanes, try doing something like that today. All the little details are exactly right and the art direction here feels like 1979.

So far I have not talked about the performances. This is a ensemble film, and even the lead character played by Affleck, is one of many stories in the film. Arkin and Goodman steal their scenes in the way pros know how, without being hammy. The six actors playing our trapped diplomats were all unfamiliar to me except for Tate Donovan, and they were stellar. They conveyed the real fears of average people in overwhelming circumstances. Victor Garber as the Canadian ambassador is fine but his part is thin despite the real life ambassador’s true heroism. Bryan Cranston is stuck playing a bureaucrat again, but this time his role is not a caricature but a honestly conflicted middle agency guy. His warning to Affleck’s character as he is heading to the Turkey and Iran is chilling, at the same time funny. Affleck plays a real life hero, Tony Mendez, who hatched the plot and bravely walked into a hornets nest to save his fellow citizens. He is appropriately purposeful and sober in his time with the non-hostages. You can see he is driven in the Hollywood scenes but also appreciates the absurdity of his position there. It is not a flashy part but it is an important one. The backstory of his relationship with his son is an important touchstone. These guys are not James Bond, they are family men, doing a hard job that sometimes puts them in the same place as the worst people in the world. The script and the performance convey that very well. Even small parts seem well cast. Adrienne Barbeau has a couple of lines, but who else would you cast as the producer’s ex-wife, fading beauty, working actress doing a read thorough in costume of a B-movie? Kyle Chandler looks like Hamilton Jordan without having to do much more than comb his hair a little differently. The whole cast was excellent. 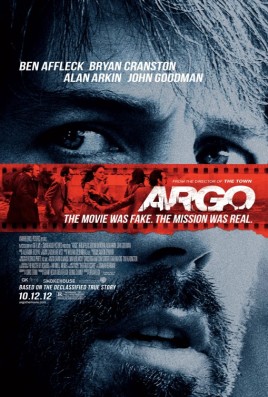 “ARGO” tells a spy story, though a Hollywood prism, with historical attention to detail. It was exciting as hell despite the fact that everyone knows how it turns out. The director puts suspense on the screen in lots of the right places, and in those spots where it is being artificially jacked up for movie drama reasons, it still works. The film stays largely free of politics, and focuses on honest people trying to do their job, who got caught up in the whirlwind of history. This movie deserves to be a big hit because it is all kinds of entertaining  and you will feel good at the resolution. A terrific story that is told by exceptional film makers.