Sometimes I have to question my sanity, or at least my common sense. This movie is out on DVD/Blu Ray on Tuesday, and it is playing in very limited release this week only. So why can’t I wait a couple of days and just buy it and watch it as often as I want? The answer is simple, as much as I love the whole concept of watching movies at home, there is no substitute for seeing a film in a theater, on a big screen, with an audience. Unfortunately for the producers of this film, my audience consisted of only five people. I know that the screenings are not really designed to bring in the cash, because they are basically just advertising for the Video, but this would be a lot more fun with a crowd of screaming teen girls, their hipper than thou dates, and a bunch of other thrill seekers looking for an opportunity to jump up and yell, “Hell Yeah”. My daughter and I love the cheesy horror elements and a shark in the water will bring her to the most awful movie because Jaws is her favorite film. So, on a Sunday morning, we drove almost fifty miles across the county, to the harbor area in L.A., and took in a screening of “Bait” in 3D.

I’d seen this promoted on a Facebook page and I liked it months ago. The site directs you to another site Called Tugg, where apparently, if you get enough requests in an area, the company arranges a screening.  I’m not sure if this was a Tugg event, after all, the film is playing all week and not just for one night. It is an interesting concept, and I saw that another blogger I follow, attended a Tugg event for “The Princess Bride”.  I’ll have to keep my eyes open on this because I am really interested in seeing older films that I have missed, or genre crap that will not get a general release, up on the big screen. So, enough background, the real question is, “How was the movie?”

The concept is an interesting mash up of a disaster picture, with a shark thriller/horror film layered on top.  A group of people with mixed motives and relationships, gets stranded after a natural disaster in a grocery store/parking garage, and they are being stalked by great white sharks. It sound pretty silly, and it is, but when you see how it all set up it makes more sense. Sometimes people are separated and they have to get from one spot to another before the sharks can get to them, other times there is a deliberate attempt to move from one spot to another to achieve a short term goal. Let’s face it, watching eight or nine people sit on a shelf for two hours is not going to make a very good movie. The sharks have reason to be antsy and the people are given reasons to test their ability to outwit and out swim the sharks.

There are plenty of odd inconsistencies in the storytelling. At one point the survivors are struggling to come up with a rag or towel to create a bandage or tourniquet. Five minutes later, they have assembled a portable shark cage, complete with underwater breathing tools. Of course it doesn’t make any sense but it does give them something to do and the audience some reason to hope for both success and failure. A movie like this, requires that there be some failures so we can get the gruesome, violent payoff we have been promised by the scenario. From the beginning of the movie, the audience knows that blood is going to be spilled, the only question is whether it will be in a style that is visually arresting, shocking, and emotionally or morally satisfying. For the most part the film lives up to it’s promises. While it is nearly an exploitation picture, it turns out that it has dramatic pretensions as well. Unlike the two “Piranha” films in the last couple of years, there is no gratuitous nudity. Unlike “Shark Night” of last year, there is no stupid horror film style subplot. What we got was a pretty standard disaster drama, with some bloody special effects scenes built in.

The actors here are all competent and deliver their lines with some sense of reality. I did not recognize most of them, but Amanda said that one of the girls is in “Vampire Diaries”, so they are not an inexperienced cast. The one guy I did recognize is Julian McMahon. He was Dr. Doom in the “Fantastic Four” films, and he played the psychotic candidate in the movie “Red” last year. He has an interesting face and demeanor, and was cast as a conflicted heavy in this film. The two young sets of actors, playing the star crossed lovers and bickering romantic partners all seemed to be the right age and were as convincing as the set up would allow anyone to be. There is no surprise in who ultimately gets killed and who makes it out into the light of day. The only elements of surprise  concerned how the shark deaths would look on film. There are two really effective and grisly deaths, two other deaths that have a little bit of payback satisfaction, and hundreds of deaths that occur within a short sequence.

I did feel a bit of moral guilt watching a group of survivors, and rooting for some and not others, shortly after thousands of mostly faceless others were killed. It is the nature of a disaster picture however to present us with that type of scenario.  Most of the deaths occur in a quick and non-exploitative manner. There were however a couple that seemed to feed the feel of the picture as a cheap action picture. If the movie had been more outright nuts, then maybe those sequences could be laughed off, I just thought they were a little too “cinematic” for a film that is trying to be a real drama. That said, the guy dangling from a rope who gets bitten in half by a leaping shark was pretty gruesome cool. The movie is not over the top crap like Piranha 3DD, but it did have a feel for exploitative action entertainment. It was a satisfying morning, and if you are looking for a low budget drama with some horrifying action, this is your ticket. If you want cheap ass thrills, wait for all the crappy horror films that are about to hit, or best of all, dip into the “Piranha” films. Bait has it’s moments, but it is actually too solid a movie for it’s own good. 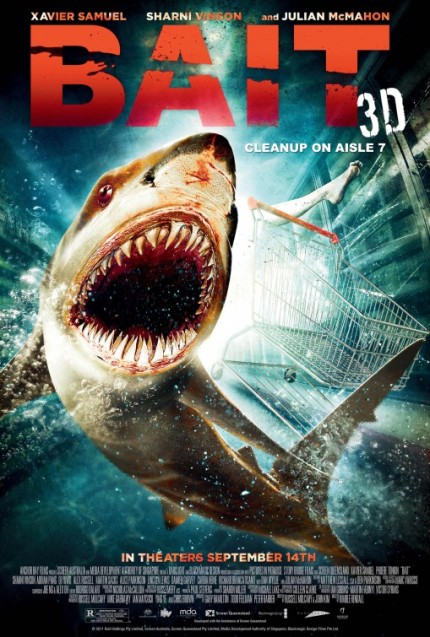