Sometimes the world comes together in a great way and all the stars line up for you. Other times, the fates conspire to trip you up and leave you in a more desperate situation. It was the later of these two scenarios that lead me to the new Three Stooges movie. In all honesty, I am looking forward to four movies that opened wide today, and I am looking for a couple of smaller films if I can just work out some timing. But instead of watching Jason Statham hand the bad guys their asses, or relaxing with claymation pirates on the high seas, I ended up at this movie. Those of you who have read at this site before may be aware that my film enthusiasm is shared by my youngest daughter. She is currently working a job that keeps her out most nights well past 2a.m.. That means that there is not always a chance to sneak off with her and catch some piece of trash that we both enjoy, or discover a treasure in a film that we had mild expectations for. I finally talked her into letting me take my wife out to the movies without her and she even agreed that we could see one of the major releases this weekend. So we headed off to run errands, and then we dropped by the theater to see if “The Five Year Engagement” was starting any time soon. Well we had missed it by twenty minutes, but I’ll be damned if I was going to walk away without seeing something.  My wife and I have been going to movies as a date since 1975. She was all set to sit down in a dark theater, share some popcorn and enjoy each others company for a while. She simply looked at the marquee for the next available show (that is the next available show that our daughter had not forbidden us to see without her) and said, let’s see the Stooges movie.

If you watch the trailer above and laugh at some of the slapstick, then you will be able to get some pleasure out of the film. If you look at it in horror and see it as a sacrilege, then you better stay away because the trailer gives an accurate feel for the movie that I am talking about here. I like the Stooges well enough. I enjoyed the shorts when I was a kid and whenever I run across one while waiting for something else on the satellite to start, I will stop down and watch. I am not however a stooge aficionado, I don’t know all the routines, quotes and inside references. I just like watching grown men poke each other in the eye, bash each other in the head and generally spread mayhem wherever they happen to go. From my point of few, this should be good for a few laughs.

I started to worry early on because the first part of the film does not feature grown men doing all the stupid head butting and nose gouging,  instead the Stooges are introduced as kids. These kids have the same mannerisms, looks and physical routines as the adults, but it does not work because the humor in most of the stooge material I have seen is based in large part on the fact that these are men who ought to know better but act like kids. Kids acting like kids just sort of falls flat. Once the adult versions of the stooges hit the screen the effect is a lot more promising. Instead of one out of five physical gags provoking a laugh, which was the ratio in the kids section, you get three out of five hitting the mark.

The Three actors playing the stooges actually do a remarkable impression of the original clowns. The guy who plays Moe has the right kind of bluster and aggression and the physical resemblance was very effective. Sean Hayes plays Larry, and he has always been a great comedic actor, here he disappears into the look, voice and general persona of the one non-Howard stooge really well. I was most impressed with Will Sasso, doing a great version of Curly in his footwork and pun laden comebacks. The script got the tone of his rejoinders right the great majority of the time. The script itself was no great shakes, but most of the Three Stooge’s shorts were not all that well thought out either. The stuff that works the best here is not surprisingly the same stuff that worked for the the real Moe, Larry and Curly, lots of slapstick physical humor combined with some good sound effects to get a laugh.  I will say I laughed out loud several times, but they were so dispersed throughout the film that they felt less intense than they needed to to be entirely successful. 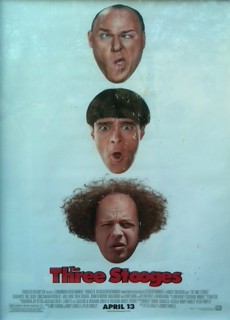 There was one long sequence that was staged like a stooge gag, but felt too much like a modern gross out comedy to really feel stooge-like. I know why it was included, and it was funny but it took me out of the fantasy a little. It does have to be a fantasy to imagine the three Stooges working again in the movies. If the Farrelly Brothers really want to revive the stooge tradition, put these guys in some shorts and find a way to attach those shorts to some other big release. I think the reaction would be more positive and the laughs would be sustained for a realistic amount of time rather than trying to make it work as a feature. I appreciated the effort, I just wish I had appreciated the movie a little more.