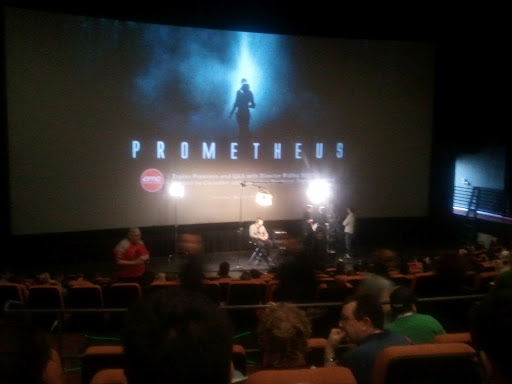 Last week I checked on one of my Facebook links and there was an invite for me to attend a Special Event at the Downtown Disney AMC Theater. The new trailer for the movie Prometheus was being launched with an on-line streaming event that included a Q & A with Director Ridley Scott. Now Sir Ridley Scott is one of the masters of modern cinema and I am Jones-ing for this movie like you would not believe. He is maybe the most creatively visual of the major directors out there. His original background was in art and advertising. “Alien”, “Blade Runner”, “Legend”, and “Gladiator” are all stunning works of visual splendor. If you have seen the teaser trailer for “Prometheus”, you can tell it is in a similarly grandiose style.

I had to go through a complicated process which involved signing up for a movie promotion site I had not heard of before in order to get the passes. Here is the PDF file that shows the ticket:

Of course my daughter Amanda is as big an “Alien” geek as I am, she believes all the best movies open in June to celebrate her birthday, so she was looking forward to this as much as I was. Well it was a rainy day here in Southern California, and the freeways were slow and the parking lot at Downtown Disney was Full. We had to wait like vultures for a spot and then scamper through the rain to get to the Theater. There was a long line for the theater the screening was in, but when we got to the end there was an attendant who directed us with our invitation to the front and a lanyard and pass to go on in. Yeah Stubbs card membership.

The front of the theater was set up as you see in the picture at the start of this post. There were a view brief announcements and then the trailer was screened for us in 3-D. Here it is in all of it’s magnificence.

After the awe that we just witnessed, Ridley Scott and Co-Producer and Co-writer of the film Damon Lindelof came out and began the Q & A with a series of questions from on-line viewers, most of which came through Twitter. There were some very descent questions and a good deal of jocular ribbing when it came to keeping mum about the plot of the movie.

When the guests left, we were given another chance to salivate over the 3-D trailer. The movie was shot in 3-D, not converted to 3-D. The questions suggest that there are aliens in the film but they are not of a type we have seen before. There was also a very intriguing question about the impact that the story presents on our religious faith and place in the universe. The two film makers thought the question was particularly relevant to the theme of the movie and suggested that we will have some similar provocative questions once we have seen the film.

On our way out of the theater we were presented with full sized posters for the movie. Clearly they saw that we were coming. It was a great experience and I can hardly stand to believe that we still have almost three months until we get to sit down in the dark and experience the whole thing for ourselves. It should be exciting, frightening and profound. Of course it will also look spectacular.

AMC Has added the video feed from the event stream to their site. Here it is for you.

One thought on “Prometheus Trailer Premire at AMC”