Finished off the long weekend with a little Denzel action. The man can play badass without breaking a sweat and in this movie all he does is kick other peoples asses and brains around. There is a little too much dependance on fistfights and car crashes and shootouts to make this work as the paranoid spy thriller it wants to be. It never rises above the level of action film with pretensions of insight. It looks like it is going to be a buddy spy film for a while and while it does have elements of that, there is not much time devoted to the motives of the two protagonists.

From the late sixties and early seventies on, there have been a thousand spy films with rogue elements of the CIA doing bad things. They must have the stupidest recruiters and the worst internal controls of any bureaucracy in history, at least if you buy any of the premises of these kinds of films. The story here involves a CIA agent that has turned traitor and may be selling secrets that will expose the CIA to international ridicule. The bad guy in the movie can be spotted early on because it is just casting that creates this character. None of this ultimately exonerates Denzel’s agent, but it is supposed to make it more acceptable that he is basically “Wiki-leaks” with a bank account.

Ryan Reynolds does a credible job as a young CIA operative, in a low level, low priority job which suddenly becomes the center of the spy universe. He sells the desire to do the right thing with his puppy dog face, and he handles the action scenes with vigor. He needs to because every time we turn around there is running, fighting, chasing and shooting. There are more survivors of car crashes in this movie than there are on the streets of L.A., I know that for sure. People get shot, stabbed, beat up and they just keep going. You hope the real spies can do all of this stuff because most people can’t make it through the course in an episode of “Wipeout” without a longer breather than any of these guys get. The director relies on a lot of shaky cam work to pump up the action, but there is some good tight choreography as well. 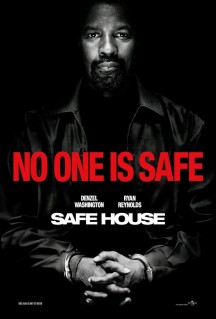 A few years ago I saw a parody of action films where the lead, turns their back and walks away as an explosion goes off right behind them. It has become a cliche in the modern action world. Denzel seems to be making it his own personal cliche to put an extra bullet in the other guy when he is on the ground, and to do it while looking away. Of course the one time he fails to perform the cliche move, there is a negative consequence so in a sense it does set us up for one piece of business.  His character is supposed to be an expert at manipulating assets with psychology, but we hardly get any of that. That would have made the relationship with Reynold’s character so much more interesting than we got here. There was enough to sustain the loud gunfights and action sequences but not the story threads.

Sometimes these films rise to a level of excellence that is impressive, but more often they simply compete with one another on body count and action. This is a missed opportunity. It was still a worthy movie, after all it features Denzel doing his thing, but the stone cold facial expression sometimes needs a little more backup. What this movie really did for me was make me want to see some Denzel films where he gets to do more than just his thousand yard stare. I could really go for seeing him work opposite Gene Hackman again. Those two are fantastic in “Crimson Tide”. If you just want a shoot em up, this movie fits the bill, but if you want something a little sweeter from Mr. Washington, maybe go back and check out some other work instead.