In the minds of the Kirkham family, this was the best film of 2009. We could not understand how after expanding the nominees for best picture to ten, the Academy of Motion Picture Arts and Sciences could neglect this exciting, artful relaunch of a historic franchise. This movie got fantastic reviews and did very good business when it came out and there was no reason that anyone should shy away from it. There have been criticisms I have seen from trolls on a number of sites that refer to J.J. Abrams as Captain Camera Flare. I think the camera flares were used in a great way in making the movie visually dynamic and removing some of the stodginess that plagued the films when they made the original leap from the small to the big screen.

AMC Theaters was running a series of films to promote their IMAX screens this last week. You could see “Fast Five”, “Inception”, or “Star Trek” for seven bucks. We went last Sunday and we went to an evening show which is why this post is just now going up (I’ve been pretty busy this week). Amanda and I both object to AMC using the “IMAX” label to sell these theaters. I know that they have special projection and sound, and you can tell that the theater screen is slightly larger than a traditional movie screen. Still, it hardly constitutes a justification for picking peoples pockets of an extra 5-7 dollars just to say you saw it in IMAX. Back when the film was originally in theaters, we did spend the extra money to see it in real IMAX, with the steep seating and the immersive seven story screen. That was worth the extra bucks. We decided that since they were showing it for a discount for all screenings for $7 , we were not really endorsing “Faux MAX”, but rather we were exploiting it. Still the sound and picture were great, but as big as the screen is, there is no way to compare it to the stand alone theaters that IMAX originally represented. This screening took place at a theater we have been going to for a dozen or more years. The Covina 30 is now really the Covina 17, they had to close half their screens because they are down from the peak number of guests at more that a million in 2000, to the 70,000 they had last year. One of the reasons that attendance might be down is that people dislike being hoodwinked by the promise of one thing and the presentation of something else.

OK, let me get off my high horse and just talk about the movie a little. This film is spectacular to look at and is filmed in a very dynamic way. The space battles are shown from a variety of dimensions. Which can be a little disconcerting but is less problematic than the shaky cam that most other films employ now a days to show action. The story sets up an alternate reality featuring the familiar characters but in younger forms and slightly different relational circumstances. It uses a time travel device to accomplish this without attempting to erase all of the history that those of us who love Trek care about. I first saw Star Trek on TV in 1966, it was a color show and the day my father brought home and set up our first color TV, Star Trek was on that night. I was not a regular Trek viewer until the show was in reruns, playing on afternoon early evening TV on our local stations. Both of my brothers watched it with me in the giant family room in a house my parents rented in the MidWick section of Alhambra. I continued to be a fan after we had moved and my brothers shifted to other interests. There is so much that is admirable about the original series that there was some trepidation concerning this reboot.

The casting is perfect. Mr. Scott is much more mischievous than in the original series, and he serves as comic relief her. That is a shift from the use of Checkov in the original series as the comic foil, but it works. Spock and Uhura have a vastly different relationship in the new movie, and it promises some interesting future plot lines. The two characters that are pretty much the same and both perfectly cast are Captain Kirk and Dr. McCoy. Chris Pine is a handsome young man with solid acting chops and he makes the future of Kirk look bright. Karl Urban has channeled DeForest Kelly and got it perfect. My only complaint is that Dr. McCoy and Captain Kirk need more by play in the main part of the story. Again, I see great room for growth in future episodes. It appears that we have had the last big screen acting from Leonard Nimoy, and he gets to leave on a winning note. Eric Banna is better in this movie than anything else I have seen him in.

It may be too late for you to get out to the AMC to catch this during it’s current run, but don’t fear. Filming is scheduled to start in a few months on the next big screen adventure of the Star Ship Enterprise, and I hold great hope that all will go well. Until it hits the big screen in 2013, “Live Long and Prosper.” 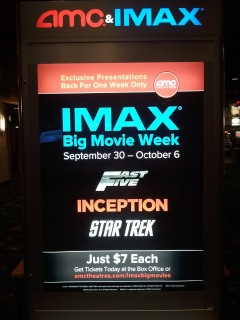 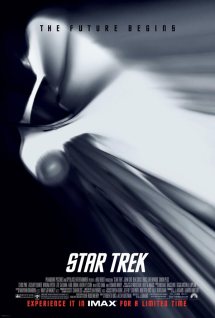